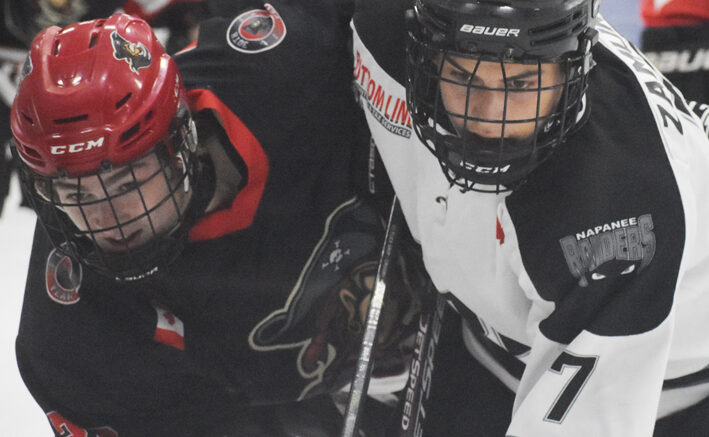 With the preseason firmly in their wake, the Picton Pirates will raise the main sail and head straight into the uncharted waters of their 32nd season of hockey in the town, complete with an initial stop at a seldom seen port.

The locals rounded out their exhibition set with a 6-4 loss on Thursday night the visiting Port Hope Panthers and then followed that set back up with a 2-1 overtime loss in Napanee a night later. Perhaps not the greatest results on paper for a club hoping to challenge for the Provincial Junior Hockey League’s Tod Division this season but a solid message to the perennial favourites that Picton is here to play. The Pirates and netminder Nolan Lane were full credit for their preseason point on Friday night at the Strathcona Paper Centre. The Wellington native bounced back admirably after surrendering a handful of goals to the Panthers at Lehigh Arena.

“He was outstanding and our group showed some great resilience,” Pirates coach Kyle Hawkins Schulz said. “In our second game in two nights, we battled extremely hard and came out of that game with something to show for it.”

Lane made 37 saves in Picton’s final preseason tuneup and got stronger as the contest wore on. The host Raiders got on the board early when former Wellington Duke Marshall McFarland banged home a quick rebound at the side of the Picton net partway through the first. Lane had several big stops in the frame that kept the score to 1-0 after 20 minutes. Early in the second, it was Picton’s turn to test Napanee starter Mitch Bown and Pirates defenceman Derrick Vos had the solution on a powerplay, collecting an Antonio Baldassare feed and finding the top corner of the Raiders net through a screen.

Neither team would score through almost 40 minutes of play but not for the lack of trying. Both Jack Dow and Brayden Adams would find iron and Picton had a pair of great scoring opportunities in the opening minute of the third period. With the game knotted at 1-1, the teams went to the extra session at three skaters aside. A collision at the Raiders bench off the draw allowed the hosts to gain the Picton zone on a 3-on-2 rush and it was McFarland potting his second in the opening minute to end the game in Napanee’s favour 2-1.

Pirates General Manager Jason Parks was enthused by Lane’s return to the Picton net and added the goalie wasn’t even scheduled to get the start Friday.

“We had an issue with Tyler Wortman’s vaccination certificate and he was unable to gain access to the rink,” Parks explained. It’s one of those new things everyone in the league is becoming aware of. Nevertheless, Nolan turned in an incredible body of work and should be very proud of the way he responded to the last second call to lead us out of the dressing room.” 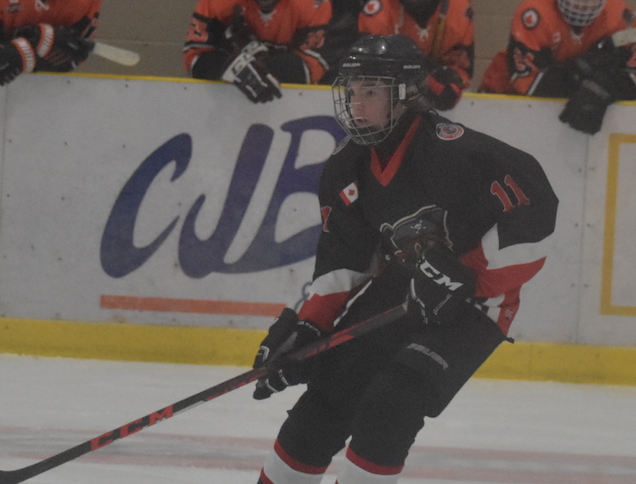 On Thursday after a pair of early leads, the Pirates were never able to get back to equal footing with the visiting Panthers.

After Landon MacLellan staked Picton to an early 1-0 lead, Port Hope would score on a high zone deflection to even the scoring. Adams would again push Picton ahead about five minutes in with a nice wrist shot that popped the water bottle off the Port Hope net. But Panthers forward Micheal Patrick would tie the game off a broken play in the slot and late Port Hope tally near the close of the frame had the guests up 3-2. The Panthers added another goal to go up 4-2 before Noah Brant’s powerplay marker drew Picton to within one.

But an Evan Wright one timer from inside the blueline handcuffed Lane and had the Panthers leading 5-3 after 40 minutes.

In the third, Pirates defenceman Cole Lavender would snap a wrist shot past the Port Hope goalie with about 8 minutes left to give the locals some life towards the end of the third but Wright was able to intercept a neutral zone pass and fired a dagger into the vacated Picton cage to make it a 6-4 final.

The Pirates finalized a number of signings this week as they head towards their first game of the season, serving as the opening night foil for the Frankford Huskies on Oct. 2.

Among them, Adams seems poised to step up and contribute in a number of ways for the Bucs. “He’s been a great player for us thus far and his versatility has really come into play,” Parks noted. “In a pinch, he’s played defence and not looked out of place.”

Another Picton forward that could wind up on the blueline this season is Noah Brant.

“From his first skate at our veterans camp until now, he’s dedicated himself into getting into shape and it’s made a tremendous difference in his foot speed. Noah’s a leader and when he makes that kind of commitment to his final season of junior hockey, his fellow veterans take notice,” said Parks.

Finally, the club has high hoped for Quinte West Golden Hawks grad Cole Stevenson who’s been able to play his natural centre position but will, as one of the club’s few righthanded shooting players, play the wing as well. “Stevey has been great, he will go to the high traffic areas and make really good desicisions. His development trend so far has been straight up and we expect it to continue,” the GM noted.

The Pirates finally return to their home port of Picton Thursday, Oct. 7 when they host Campbellford. For those keeping track at home, the Pirates have been at sea for 574 days between Game 2 of the 2020 Tod Division Finals and their 2021-22 PJHL home opener. Capacity at Huff Estates Arena is 250 and Parks is hopeful for a COVID reduced full house.

“Between last year not having a home game and our new executive group, our new staff and new players, we are counting on the community to come out and support the club. We ask you those attending to follow the social distancing rules, mask mandates and please have proof of your complete vaccination ready to be checked. Our volunteers are excited and will do their best to ensure everyone is able to find a seat prior to puck drop at 7:30 but we ask for patience,” he said. –Staff