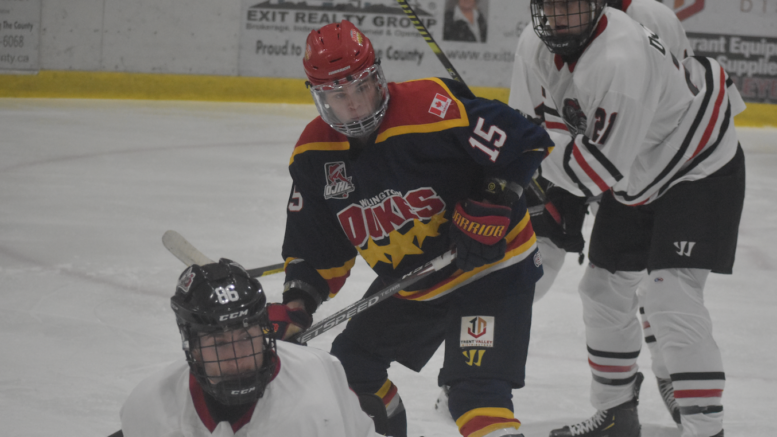 The Wellington Dukes secured three out of a possible four points this weekend but it’s the loss of one outstanding point that should provide a teachable moment for the local Ontario Junior Hockey League squad.

Wellington was able to down the Mississauga Chargers on Friday night in the first Dukes game open to fans since mid-March, 2020. Over 400 Dukes fans saw the hometown faithful build a 3-0 lead through 40 minutes en route to a 4-1 win Friday night. 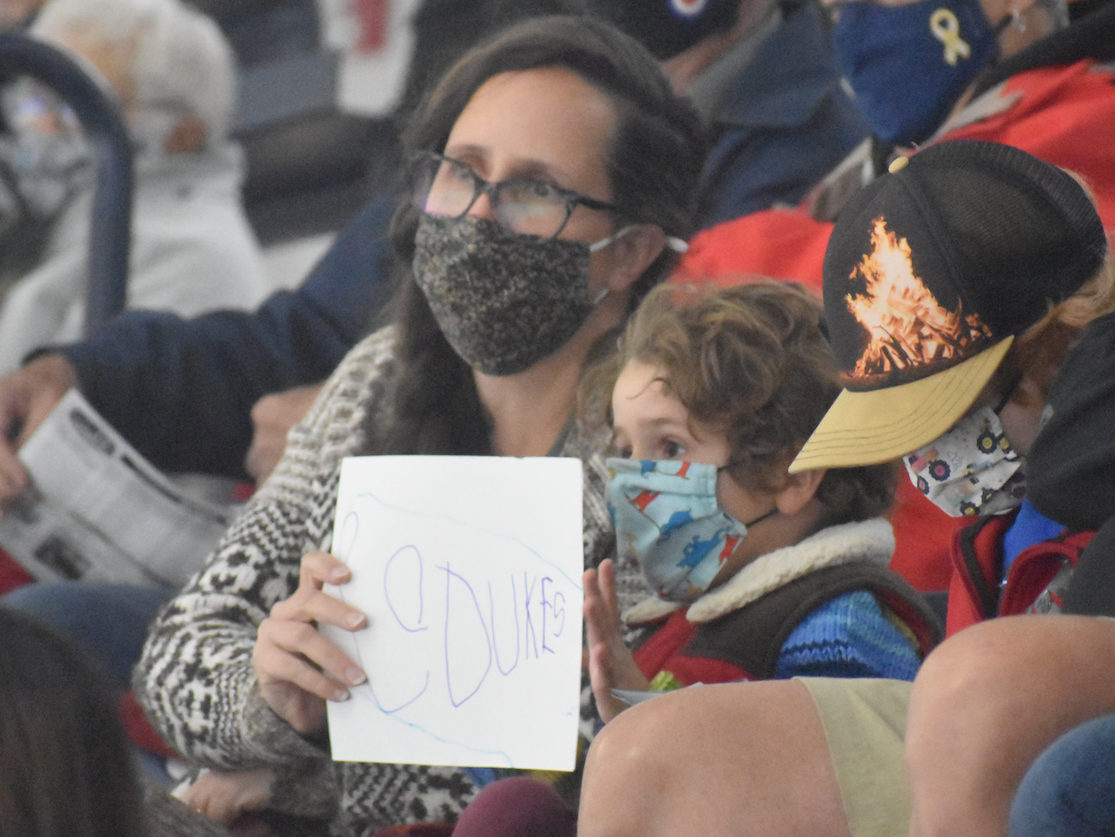 While Wellington was able to thwart any late game ‘charge’ from Mississauga on Friday, the Dukes were unable to replicate the feat on Saturday night in Cobourg.

The locals would lead the Cougars 1-0 after 40 minutes and had a 3-1 lead over the final 10 minutes of the contest but were unable to hold off the hosts in the late going, giving up a pair in the final 6:15 of play and then incurring a disastrous too-many-men on the ice penalty in overtime that allowed Cobourg to score and grab their first and only lead of the hockey game.

For a team that lacked consistency in the preseason, a flash back to that potentially fatal flaw on Saturday is something the coaching staff will need to address going forward.

“We started well and turned in a  good 40 minutes but in this league, if you take your foot off the gas pedal for even a couple of shifts, teams will burn you and we became very vulnerable in the late going,” Dukes Head Coach Derek Smith said. “It’s another great learning experience for this group to figure out what a full 60 minute effort means to being successful in this league.”

Wellington netminder Matt Dunsmoor drew the starting assignment for the Dukes and was perfect through two periods however his counterpart in the Cobourg net Carter Tahk was nearly as impressive.

Tahk’s only blemish was a Payton Schaly powerplay marker at the 4:23 mark of the second that had the Dukes up 1-0.

In the third, Jacob Gilbert scored 20 seconds into the stanza to square the affair at 1-1 and that early goal might have given Wellington an inkling of what laid instore for the visitors.

Schaly’s second of the game and the season at 5:58 helped push Wellington back in front 2-1.

The Dukes extended thier lead later in the frame when Jonathan Balah played trigger man on the powerplay at 10:44. Barret Joynt and Schaly picked up helpers on the scoring drive.

But where the powerplay giveth, the penalty kill taketh away and it was Cobourg’s George Krotiris potting a man-advantage marker at 13:45.

Wellington still looked in good shape until a giveaway allowed Tai York to fire home an equalizer at 17:46.

In the overtime, a botched change at the Wellington bench set up a 4-on-3  powerplay for the Cougars and Gilbert’s second of the contest ensured the homeside’s fans left the Cobourg Community Centre in a joyous mood.

On Friday, Wellington got off to a quick start and didn’t look back as Joynt exploded for a four point outing.

Corbin Roach would send Joynt in for the games first tally at 1:45 of the first and then it was Joynt and Picton Pirates grad Jacob Dietz setting up Quick for the 16-year-old’s first junior hockey goal at the 13:36 mark of the opening period.

Wellington had the only goal of the second as Quick and Joynt set up Harrison Ballard for the Scottsdale, AZ native’s first of the season.

In the third, a Wellington penalty lead to Nicholas Corderio to blast a powerplay goal past the glove of Dukes starter Ethan Morrow, the netminder’s only goal allowed over 29 Charger volleys.

But later in the frame, Joynt made it a night to remember as he tipped home a powerplay marker with 4:17 left in the contest to salt it away for the hosts. A rare, four point season opener was in the books for the Kingstonian who looks poised to make OJHL observers sit up and take notice.

“Barret really put the work in over the summer and he not only wants to develop his own game but he’s really bought into the success of the team and it really showed in game one,” Smith added.

Wellington fans get their first look at the Haliburton County Huskies-formerly known as the Whitby Fury- on Friday evening.

After hosting St. Mikes on Sunday at 2:30, the Dukes hit the road for a two game trek, travelling to Lindsay on Tuesday to play the Muskies before hooking up with the North York Rangers at the Herb Carnegie Arena.