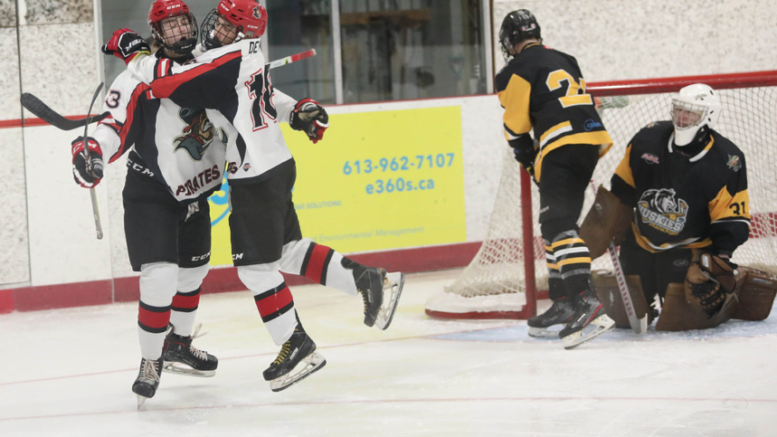 Owen Dever leaps into the arms of Landon McLellan after the former set up the latter for the game's first goal Saturday night. (Shawna Adams for the Gazette)

In 1989, the Picton Pirates set sail on their first seasonal voyage through the turbulent seas of the newly minted Empire B Junior C Hockey League.  Other than ice a team every game, it’s difficult to say the Pirates accomplished much that season, not registering a win until the 1990 playoffs.

So Picton Pirates fans and alums of a certain vintage can appreciate the lessons the Frankford Huskies are about to learn in their first season of Provincial Junior Hockey League play. 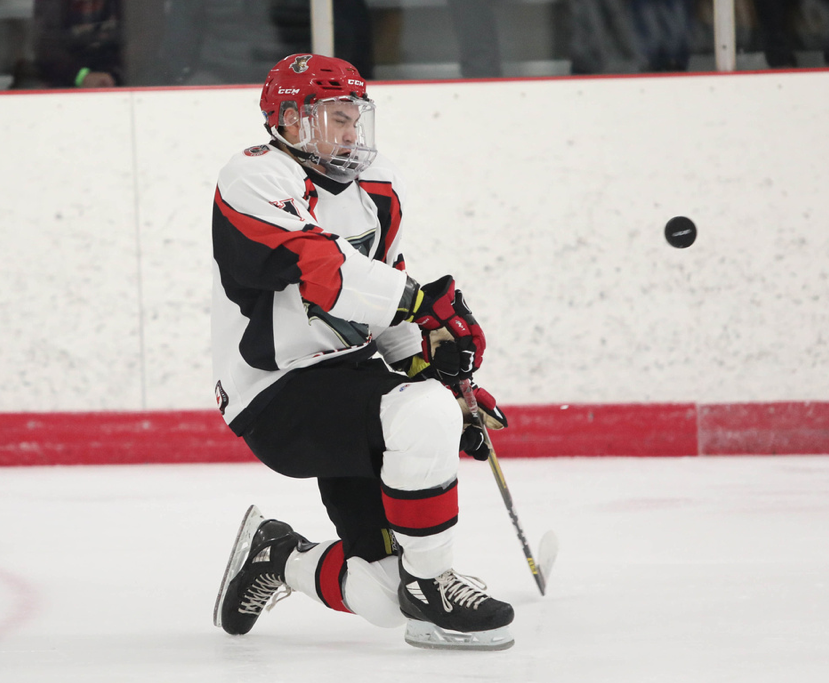 The 2021 edition of the Pirates pulled the Pups into the class room Saturday night and offered some obedience training in a 6-1 win that reopened Frankford’s Dr. McMullen Recreation Centre to junior hockey for the first time since the mid 1980’s.

Up 3-1 going into the third, the locals bulged the twine thrice to win the their season opener going away.

“It’s always nice to get that first one out of the way,” Pirates Head Coach Kyle Hawkins Schulz said. “The energy level was great as you would expect it would be for this time of year. Once we were able to figure out the ice surface, the bounces and the angles, I thought we looked a lot better.”

Happy bounces off the half wall and dead spots in both ends of the frozen bathtub made for a scrambled first period of play.

It would be the Pirates scoring the first goal of the season in Frankford at the 3:01 mark of the first as Landon McLellan would beat Huskies starter Hayden Candler to the short side with help from Nate Brant and Owen Dever.

Picton’s first lead didn’t last a minute however as a mishandled puck at mid ice led to a defensive zone entry and an eventual Connor Gilligan shot from the high slot that beat Pirates starter Tyler Hayes low on the glove side.

The period looked like a safe bet to end tied at 1-1 but a late period face off in the Frankford end allowed Nolan Dawson to feed blueliner Hunter Matthysse.

The Picton vet who was out of hockey last season and last appeared in a game for the Campbellford Rebels in 2020 fired a volley to the Frankford net that caught a piece of Candler and toppled end-over-end into the mesh mansion with 1:11 left in the opening frame and would stand at the eventual game winner. 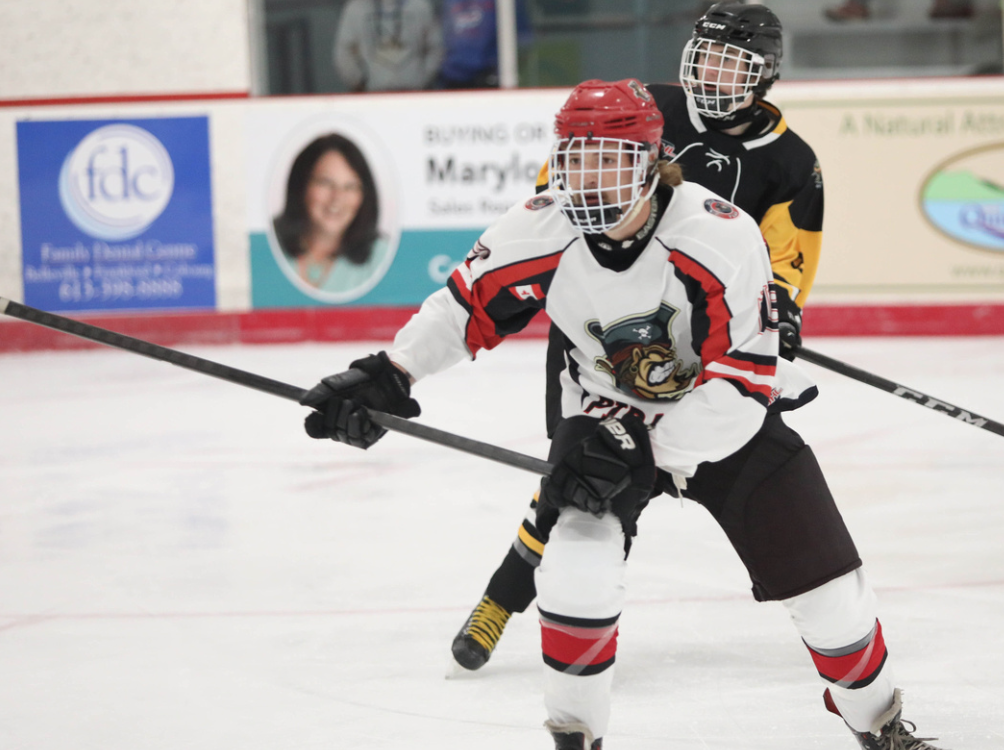 In the second, Picton picked up the pace and spent a large portion of the frame in the Huskies end but only came away with one goal to show for their efforts.

Overager Owen Dever managed a step on the Huskies defence and blasted a high shot that found a piece of Candler’s blocker and tumbled into the Frankford net at 11:52

Early in  the third, Picton potted a pair in quick succession to quell any idea of a Huskies comeback.

Ian Harrison found Devin Morrison in the slot area for the Capitan’s first at 4:03 and less than a minute later, McLellan bagged his second of the night unassisted.

Picton’s Nate Brant sealed the scoring off at the 8:27 mark as Dawson’s nice pass set up a one time shot that Candler couldn’t handle.

For Brant, after not scoring in the 2020-21 “season” and having an abbreviated training camp, picking up a pair of points and controlling his side of the ice through strong physical play was a nice way to break into the season.

“It felt really good to be back out there and playing full contact hockey,” Brant said. “It was really difficult to play non-contact last year and so this is awesome to get back to real hockey.”

For General Manager Jason Parks, picking up Nate Brant midway through training camp and seeing him perform well on opening night was special.

“Because he stepped away mid way through whatever you called last year, his status wasn’t very clear but we approached him, explained that full contact hockey was back in the PJHL, he said he was interested in trying to come back and play for the Pirates again,” Parks said.

Nate Brant is the younger brother to Noah Brant who exited the game early in the third period after getting hooked awkwardly into the boards.

“Noah was ok after the game and probably could have played in the third but we didn’t want to risk any aggravation,” Parks added.

Saturday’s opening game in Frankford made for couple of firsts for the Pirates as well.

Hayes picked up his first PJHL win while Hawkins Schulz was a winning head coach at the junior level for the first time ever.

“The organization is very proud of both of them,” Parks said. “Tyler has worked very hard to earn the honour of being the starting goalie in the first game of the season. In terms of Hawk, he’s been highly engaged since our mini camp and I’ve been very impressed with his attention to detail and the way he’s got this team conditioned. Our team conditioning was incredibly evident in the last half of the game and that’s how you can pick up points early in the season in this league.”

The Pirates return to Huff Estates Arena on Thursday night for their first home game in over 570 days when they host the Campbellford Rebels.

Fully vaccinated fans are welcome to attend and are asked to bring proof of their vaccination.