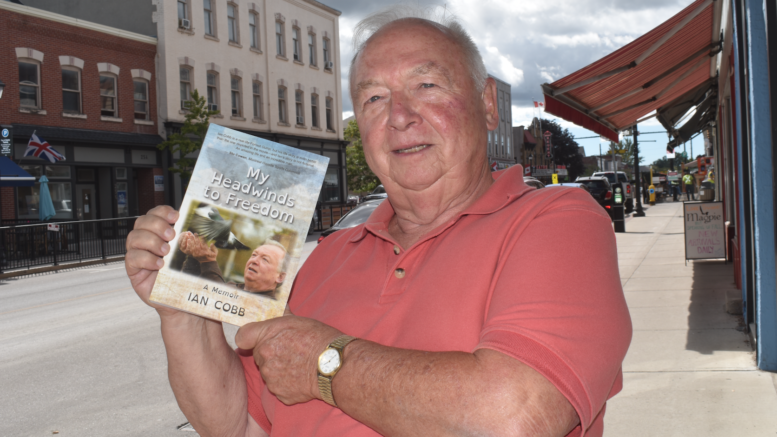 When Stanley Cup Champion coach and soon to be Canadian Senator Jacques Demers announced through his authorized biography by Mario Leclerc En toutes lettres (English translation: All Spelled Out), this corner found it near incomprehensible how someone could reach such a prominent station in life while being functionally illiterate.

A number of hockey fans and people across Canada found inspiration in Demers’ story and one of them, described by Montreal Gazette columnist Stu Cowan as the “real-life Forrest Gump” has penned his own memoirs.

Like Demers, Ian Cobb worked for the Montreal Canadiens albeit in a very different role and the author of My Headwinds to Freedom reached out to the coach-turned-sportscaster in late 2005 to thank him and admit that he too had concealed being illiterate for his entire life-a span that included a stint working for the Montreal Gazette in the sales department.

Born in nearby St. Lambert, Cobb ran away from home due to his troubles at school where he never fit in and grew up on the streets of Montreal with 50 per cent hearing loss and undiagnosed dyslexia. Cobb said he could never figure out why he would slip through the cracks and printed letters would jump, dance and merge on pages of text books, work sheets, newspapers and magazines.

“I always felt like my elevator went to the top floor but it turns out I just in a different building than everyone around me,” Cobb told the Gazette.

Cobb’s first job as a kid on the streets was to find a box or something to stand on so he could get into a dumpster out side a restaurant to find his breakfast.Eventually, Cobb would get a job washing dishes at a dining hall but was still spending nights sleeping in parks.

“My boss said there were three guys at a table that wanted to talk to me,” Cobb said.“This guy named Danny said ‘We hear you are a good worker-do you want a job?’ I said sure. After my shift, they take me over to the Montreal Forum and introduces me to a guy I’m to report to every morning.”

Cobb’s day time job was to take all the children of the Canadiens players that were practicing and organize games  and keep them entertained while the world champions got their daily skate in.

Danny Gallivan was the man who set up the position for Cobb and General Manager Frank Selke was able to assist Cobb in finding accommodation at the Montreal YMCA where he had his first warm bed in quite some time.

After a some beneficial classes that were more like lectures on life, Cobb wanted to travel and embarked on a series of coast-to-coast adventures al-a the title character in Winston Groom’s classic. Any job in North America was a box car ride away as Cobb journeyed from town to town, working on pipelines and infrastructure projects.

All without any type of functional literary skills.

Settling down in New Brunswick and building one of Canada’s largest Silver Fox ranches, it was in the maritimes where Cobb’s adopted son started falling through the cracks at school and concerns started to grow within the author that the young lad might wind up facing the same issues.

“I ended up taking the same battery of tests my son did and they explained to me I, like my son, was dyslexic and I had no idea what that was,” Cobb said.

His marriage dissolved in part due to Cobb’s secret life of fabrication, dishonesty and guilt that comes with hiding illiteracy as well as his ever present desire to not wind up poor and old.

“I was young, abused, poor and sad and there was no way I was going to wind up that way as an older adult,” Cobb said.

Eventually, Cobb was introduced to computer and, more importantly, computer text on a screen where letters and numbers didn’t dance.

With help from his friend Andrée Quinn, Cobb would very slowly and methodically learn enough words to create sentences and found a Montreal Canadiens website where he started to realize his goal of reading and comprehending written text.

“The words didn’t merge like they did on paper when I was looking at the screen,” he explained. “I’m sure I drove Andrée crazy asking her to spell words and create sentences. I later discovered spell check and that was a great tool for me.”

From illiterate to author. An incredible journey on its own.

But when looking at the life of Ian Cobb, it’s just another chapter in his book of life and an entertaining one at that.

Cobb’s effort my be purchased by emailing him at cobbiangrant@yahoo.ca