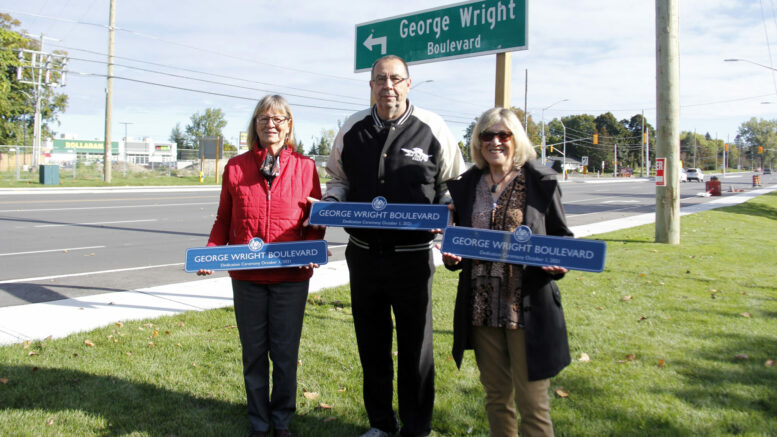 Daughters of George Wright (left) Lynda Simpson, (right) Eileen Whittle and his son (centre) Edward Wright stood proud with signs they were given as a surprise from The County to hang in their own homes. (Desirée Decoste/Gazette staff)

A man who quietly and dutifully served his country and his community has been memorialized with the naming of a blouevard in his honour.

The late George Wright, a Second World War veteran that served in the famed Devil’s Brigade and also a member of the Picton municipal police force for more than 25 years was honoured on Friday in Picton at a street naming dedication ceremony.

The street, George Wright Boulevard, is off of Loyalist Parkway in Picton and connects the road to No Frills and Foodland. Future development plans call for the road to eventuially connect to Talbot St.

Present for the ceremony were Mr. Wright’s daughters Eileen Whittle and Lynda Simpson, his son Edward Wright as well as honorary guests, family and friends. 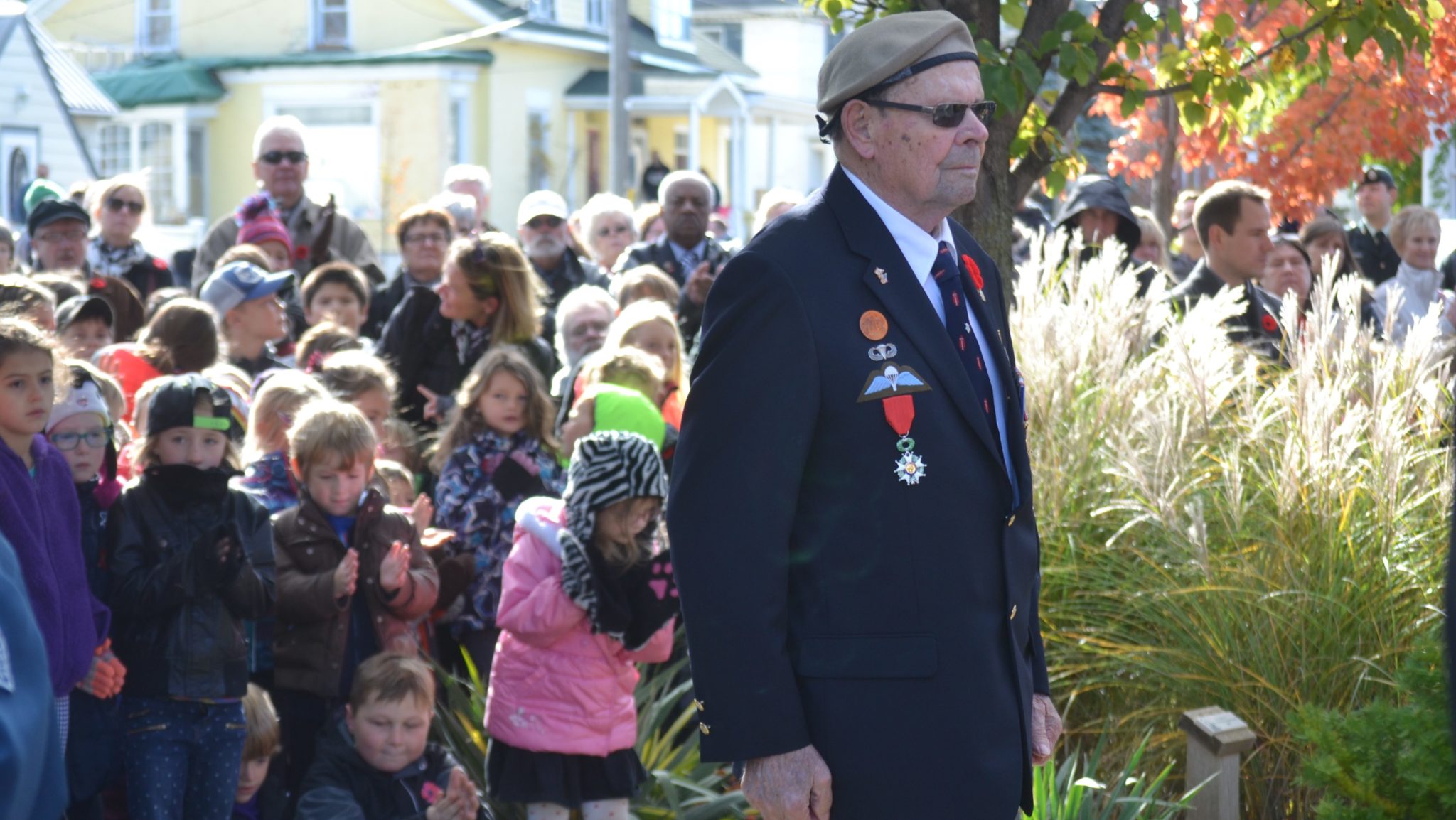 “I am pleased we can finally gather for this dedication ceremony officially naming George Wright Boulevard,” stated Mayor Steve Ferguson. “Mr. Wright was an exemplary member of the Prince Edward County community. His bravery during the Second World War as a member of the elite Devil’s Brigade still astounds and amazes nearly 80 years later.”

In 1942 when the call came out at the Hastings and Prince Edward Regiment to serve in a new joint United States-Canadian expeditionary force that would take on high risk missions, Wright stood up and answered that call. After a number of years of service and training as a proud member of the Hasty P’s, a unique opportunity came for him to serve in what was the first opportunity for the United States and Canada to have an elite special forces unit.

“Not only had he taken up the task of King and country, but he offered to do some of the most dangerous work possible,” said Lieutenant-Colonel Marc Gallant, with Hastings Prince Edward Regiment. “And with great distinction he served. He endangered his own wellbeing, his own safety, his own life, to take care of a comrade, so an outstanding gentleman. And afterwards he came back from the war and worked for Bata for a number of years and decided to continue to serve the community in the police department here in Picton.”

Gallant recalled joining the OPP in the mid-1900’s and being stationed in Prince Edward where he had his first occasion to meet Wright.

“George was well beyond legendary status in both the military and the law enforcements unit at that time. I was trained by his peers he trained so had the occasion to bump in to him occasionally as a dashing young officer with police here in the county. He spent a life time of service for this community, not just the country but the community itself. Among those people who stand up and do good things, Mr. Wright stood out. He stood out as a local champion and a local hero,” Gallant said.

While he stood as an example of the County’s very best serving in the most dangerous times and places in World War II, Wright was always quick to eschew the label of hero.

Wright was selected as part of the first company and first battalion of the First Special Service Force. The unit received extensive training including parachute training, rock climbing, and mountain warfare in the United States, but the deployment to Norway never came. Instead, the First Special Service Force was deployed to Italy late in 1943. They were among the forces that liberated Rome.

The special force was involved in fighting in the mountainous region along the French-Italian border well into 1944. It disbanded Dec. 5 that year near Villeneuve-Loubet, France along the Mediterranean Sea after helping liberate territory and being accountable for thousands of German prisoners and casualties. The nickname Devil’s Brigade is said to have originated from the diary of an enemy officer who referred to them as “black devils” who appeared out of nowhere to wreak havoc.

“I’ve been treated like a hero tonight. I want to assure you I am not a hero,” Wright told attendees. “All these medals and ribbons doesn’t make for a hero. I’ll take credit for being a good soldier. I did what I was trained to do. As far as my life for somebody else, there was nobody in our force that wouldn’t have done the same thing and risked his life for me and there was nobody I wouldn’t risk my life for.”

Mr. Wright passed away at the age of 98 on December 19, 2018 leaving behind his legacy from being in the military, Picton police force and an invaluable member of the community.

“I thank all of you for sharing part of your morning with us,” Whittle expressed. “This is great that we could gather. On behalf of my sister Lynda, my brother Edward and myself I wish to thank the town of Picton for honouring dads memory with this very meaningful tribute. I often think about streets being named after famous people or people who have made a special contribution to a community. In our eyes dad was famous, and he was very special. Thank you to all the honourable guests for being here today and for your kind and enlightening remarks.”