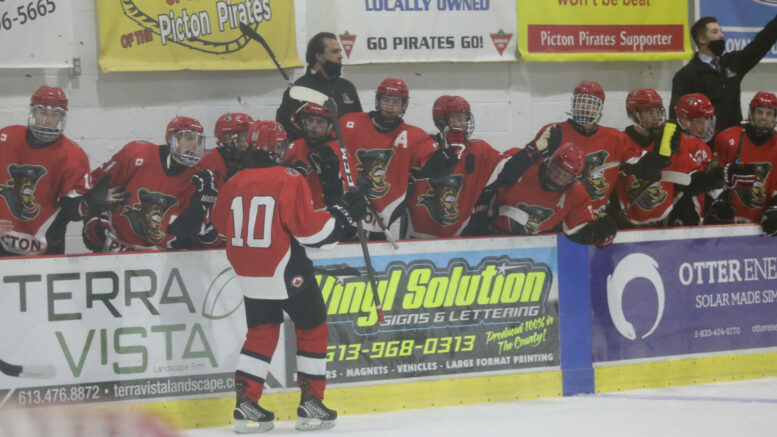 The Picton Pirates made it a two-for on turkey weekend.

The local PJHL outfit continued to roll this Thanksgiving holiday to kick off the 21-22 season, topping the visiting Campbellford Rebels in the club’s 32nd home opener before doubling down on the Panthers in Port Hope Saturday.

The wins left Picton at 3-0-0 and in a tie for top spot in the Tod division with the Napanee Raiders. 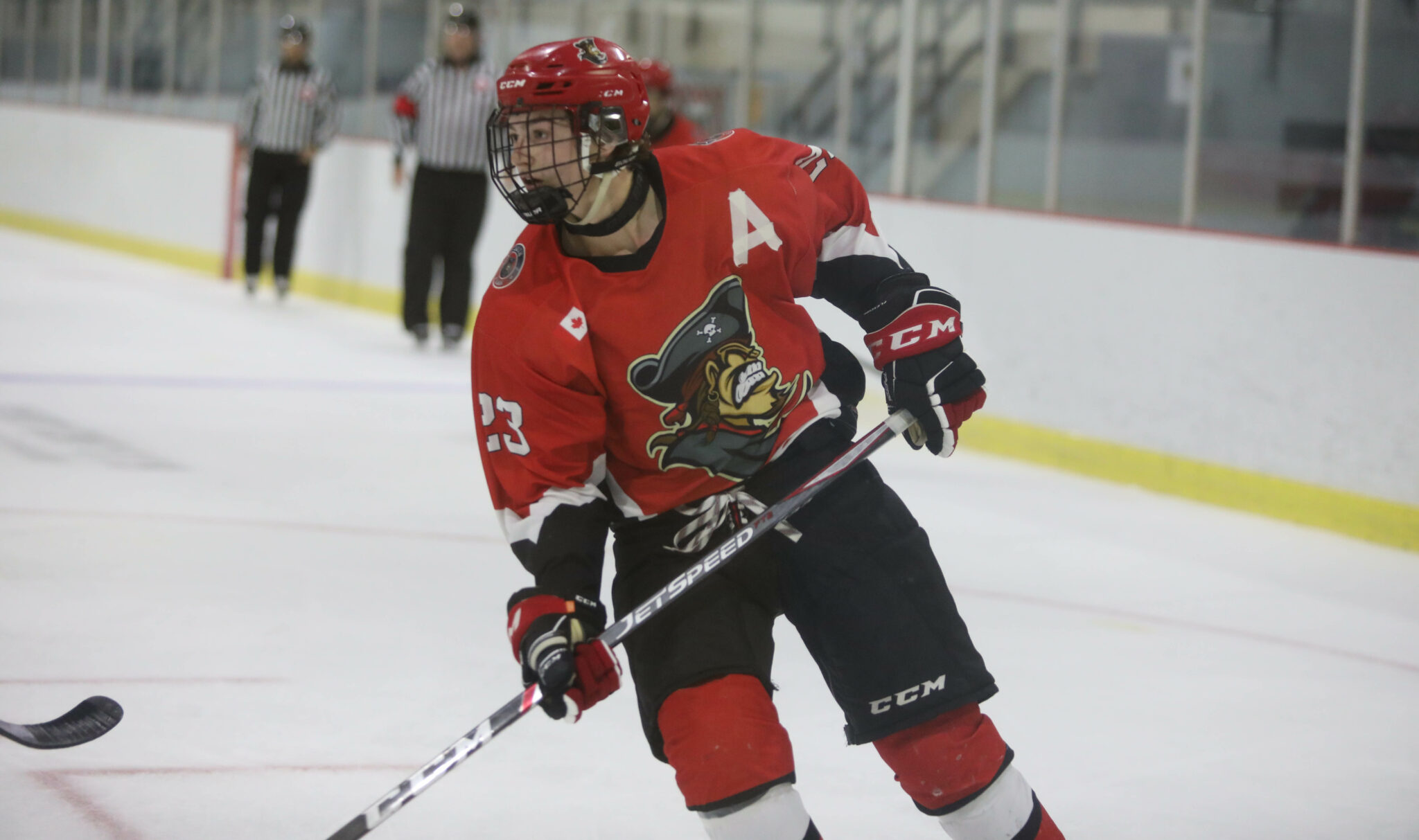 Through three games, Landon McLellan has six goals. (Shawna Adams for the Gazette)

The battle of the last two undefeated teams in the circuit happens this Thursday in Picton.

“Getting off to a great start is pretty important when you consider the shortened season and the injuries and suspensions we’ve been working through but the club is starting to figure out the system and how we want to play as a team,” Coach Kyle Hawkins Schulz said. “The first period in Port Hope was the best period we’ve played all season and that progression needs to continue.”

The Pirates shot out to a 2-0 lead through the opening 20 minutes at the Jack Burger Sports Complex.

Winger Noah Brant picked the far corner clean on Port Hope starter Aidan Thomson at the 5:05 mark to push the Pirates ahead to a 1-0 lead.

Partway through the first, Landon McLellan caught Thomson leaning the wrong way and a smart volley eluded the Port Hope net minder at 12:24.

Picton severely limited the time and space of the Port Hope shooters in the opening frame but through bad bounces and costly decisions, the Pirates’ great opening period was followed up with a poor effort in the second stanza.

A little less than six minutes later, Will Perley-Fry managed to corral a loose puck at the top of the circle and beat Hayes to the short side to tie the game up at 2-2.

The Pirates would come oh so close to reagingin the lead later in the second when a nice cross ice pass from Brant found Pirates captain Devin Morrison wide open but Picton captain couldn’t control the hot pass.

More than half way thorough the third and tied 2-2, Picton’s veterans clicked again to jump in the driver’s seat to stay. 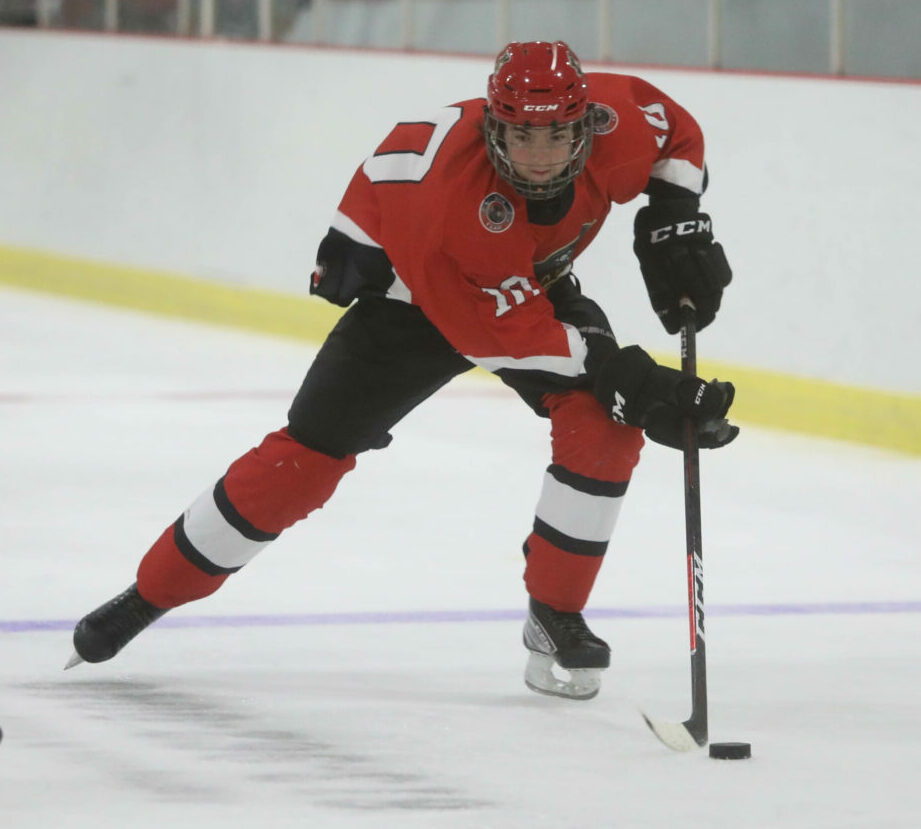 McLellan would send a nice pass to the high slot area where Brant was able to redirect the puck past Thomson at the 12:12 mark.

Late in the frame, McLellan fired home his Tod Division leading sixth of the young season to put a dagger into the hearts of the Panthers.

“Winning on the road is always fun and despite the inconsistency that cost us the lead, we had a very solid effort in the third and got back to our game,” Pirates GM Jason Parks said.

On Thursday, the club opened up with a ceremony celebrating the legacy of outgoing Secretary and Treasurer Nancy Woods whose steady hand, attention to detail and dedication ensured the longevity of the Pirates even in the roughest seas.

“We talk often about some of the great names of the Pirates players of the past, our 2013 Schmalz Cup, etc, but it shouldn’t be lost on anyone that is connected or cheers for this team the legacy of Nancy Woods and her husband Dick and what they’ve done to make sure this team has been here season-after-season. There’s been people in and out of the executive but Nancy has been the mainstay,” Parks said.

Woods was escorted by 2013 Schmalz Cup Team Captain Brandon Peever to drop the ceremonial puck on the 2021-22 season.

The visiting Rebels would open the scoring as captain Benny Scarr ripped wrist shot on the powerplay past Picton starter Nolan Lane at 10:30

The Pirates would respond just over four minutes later when Brayden Adams found McLellan in the high slot and a wrist shot beat Rebs starter Cameron Hansen at 14:37.

Less than a minute later, Campbellford was able to establish the lead when Josh Sainthill caught Lane leaning at 15:55.

Picton would press the attack in the second and finally pushed their way past Campbellford in the 13th minute of the period.

Picton blue liner Liam Lochhead who was out of hockey last season collected a loose puck inside the blue line and fired towards the Campbellford net.

Rookie Cole Stevenson was able to get a stick on the blast and deflected the puck into the Rebel net to make it a 2-2 game.

A mini celebration surrounding the Trenton native everyone on the Picton club has taken to call ‘Stevie’ was on.

“He continues to work incredibly hard to make himself and his hockey team better each time out,” Parks noted. “The veterans have really taken to him because of the way he comes out, plays his game and works hard every shift.”

While there was jubilation on the Picton bench over the freshman’s game tying volley, McLellan was able to take advantage of a stunned Campbellford squad and scored to give the hosts their first lead of the contest just 19 seconds later.

Overager Owen Dever would find the five hole with help from Noah Brant and Nick Kirby at 3:47 to extend Picton’s lead.

Just under a minute later, Nate Brant and Campbellford’s Dryden Minifie mixed it up in the corner in a spirited dust up.

At 9:47 of the frame, Lane was left to his own devices and Connor MacGregor was able to get in alone and beat the Picton goalie at 9:47 to draw the visitors back to within one.

But the Pirates picked up a key piece of insurance less than a minute later when Noah Brant and Nolan Dawson were able to successfully convert a 2-on-1 rush with the latter playing trigger man.

Cambellford would pick up a power play opportunity but smart work by Stevenson helped keep the Rebels in their own end for much of the man advantage.

With Hanson lifted for an extra attacker, Ethan Slater would score with 1:12 left to make the final thrilling but Picton was able to quell any Rebel uprising to secure the 5-4 win.

In addition to Stevenson’s first goal, the game ended with Lane picking up his first junior win.

Picton has just the lone contest against Napanee on Thursday and then are off until Thursday, Oct. 21 when they host Port Hope.

ON BOARD WITH THE PIRATES: Picton was without several regulars on Saturday night including Dawson (Ankle) and Nate Brant (Wrist). Both are expected to be back in the lineup Thursday…The club got Derrick Vos back on Saturday as his preseason suspension ended with the conclusion of Thursday’s game…Nate Boomhower will be eligible to return form his seven game suspension on Friday, Oct. 22 in Napanee.