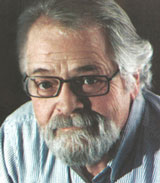 BOORNE, David John – was born at his family’s farm at Ellesmere and Kennedy Road on Dec. 6,1942. His formative years on the farm framed his life and passage through this world. A life marked by unbounded curiosity, creativity, lateral thinking, integrity, energy, compassion, and family. He was drawn to the outdoors, particularly to being on or near water, and possessed an unending delight and penchant for jokes and puns.
After graduating from David and Mary Thompson High School, Dave studied at Sir George Williams University (now Concordia). Religion caught his eye but life intervened, as it often does, and Dave spent 33 years in education as a teacher, consultant and principal with the former East York Board and The Toronto District School Board. He completed degrees in Education at Toronto Teachers College, York University, and the Ontario Institute of Studies in Education at the University of Toronto. Following his retirement, Dave pursued his interest in sculpting creating abstract, evocative and whimsical pieces in stone, wood and metal. He was so happy outside creating in his workshop. Dave served on the Board of Directors of the Quinte Ballet School and on many arts committees in Prince Edward County.
Frustrated by the lack of information on what his father did during the Second World War, Dave researched and published a book entitled The Canadian Kangaroos, The Unknown Regiment. The book documented the regiment but was in fact a love letter to his father.
One of his biggest adventures was the purchase, with Anne, of an 1880 farmhouse in Prince Edward County in 2003. They renovated the old house, reclaiming the three acres of a fallow farm land with trees, gardens and later a pool, all marked with Dave’s characteristic MacGyver-like style. In the winter of 2018, Dave and Anne adopted Tucker, a delightful loving dog, who was Dave’s buddy and constant companion as he faced many health issues in recent years.
Dave passed away on October 3, 2021 after suffering a stroke. He was predeceased by his parents, Marjorie and John, his brother Robert and his son Andrew. He is survived by his wife Anne Preston, his sons Ryan and Scott Boorne, his stepchildren Kate Jordan (Matt) and Matthew Jordan (Samantha), his grandchildren Will, Oskar, Eva and Millie, his sister Marg Luck, his niece Christina Luck and sister-in-law Donna Boorne.
Our loss is enormous.
Thank you to the medical team of the stroke unit and ICU at Belleville Hospital. Arrangements through the Rushnell Funeral Home – Picton Chapel. Cremation has taken place and a private service will be held. A celebration of Dave’s life will take place, hopefully, in the spring 2022 when all can gather safely. Donations in Dave’s name can be made to the Heart and Stroke Foundation, or a community charity in Prince Edward County.