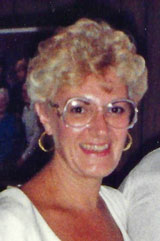 Linda Darlene Nixon (McConnell / McNeill)
1945 – 2021
The family of Linda Nixon is saddened to announce that our beloved ‘big sister’ passed away at Belleville General Hospital, Belleville, Ontario on October 5, 2021 at the newly turned age of 76. Linda had been a resident of Prince Edward County since we, her siblings (Barbara and Michael McConnell), transferred her here in early 2018. We moved Linda from the Tilbury Manor Nursing Home in Tilbury, Ontario to Picton because we had both moved to the County. Linda resided first at Kentwood Park Nursing Home for a year before moving in 2019 to the H. J. McFarland Memorial Home.
She was blessed with a ‘joie de vivre’ that belied the daily challenges of living for more than half of her life with progressive chronic muscular scleroses (MS), which meant that for much of the last 20 years, she was confined to bed and a wheelchair. Her demeanor was to greet each day happily taking pleasure in seeing anyone who popped in, whether a family member or a person from her care team of doctors, nurses and personal support workers (PSW).
Loving the idea that, “You are who you think you are”, she believed in herself and she was okay with living the life she was handed with contentment and a broad smile.
To us, her surviving siblings, Barbara McConnell (Errol Weaver), Milford; Michael McConnell (Susan Howson), Cressy; and Terry McConnell (Vicki Sharron), Edmonton, she was an inspiration.
Linda was born in Fairview, Alberta, where our mother, Valerie Stanlietta (Walker) grew up. Val, as she was known, met our father, Harold Douglas (Mac) McConnell when they were both serving in the Royal Canadian Airforce in Summerside, PEI, during WWII. Both are deceased.
When dad left the air force, he pursued a career in community newspaper publishing, eventually settling the family in Tilbury, Ontario near Chatham. We all become involved in the family newspaper publishing business, the Tilbury Printing and Publishing Company, at various points in our lives. Linda set high standards as an award-winning editor of the Belle River North Essex News before she stepped down to raise her own family. Married first to Gerald (Gerry) McNeill of Oak Ridges, Ontario, she became a mother to Gerald McNeill, junior of Vancouver, BC, and Kelly Santos (Carlos) of Oshawa, Ontario. Both are surviving.
Linda rejoined the family business once the kids were off to school, this time putting her newspaper editing experience to work as production manager of the weekly editions of a group of four community papers. After she and Gerry separated, she later met and married her second husband, William John Nixon (predeceased in 2002). She remained ‘on the job’ until MS, as it progressed, robbed her of her mobility in the early 2000s.
Linda had numerous nieces and nephews and grand nieces and nephews whom she remembered fondly as she and Barbara regularly paged though social media postings. Her favourite, however, was Michael’s son, Jon, who delighted her by speed walking her wheelchair through the streets of Tilbury for adventure excursions around downtown and for her weekly visits to Michael’s for Sunday dinners.
In later years, though her world had narrowed resulting from the MS and Covid-19, she still had an enormous will to live and to enjoy whatever the day brought her. In her last fight, however, she wasn’t able to overcome the pneumonia that took her. Deeply loved, she will be missed beyond words.
In the care of Rushnell Funeral Home ~ Picton Chapel, cremation has taken place. A memorial service is planned for a later date in Windsor, Ontario where she will be interred with her husband, Bill.
Anyone wishing to honour Linda can do so by donating to the Prince Edward County Memorial Hospital Foundation or the MS Society of Canada.
Online condolences may be left at: www.rushnellfamilyservices.com