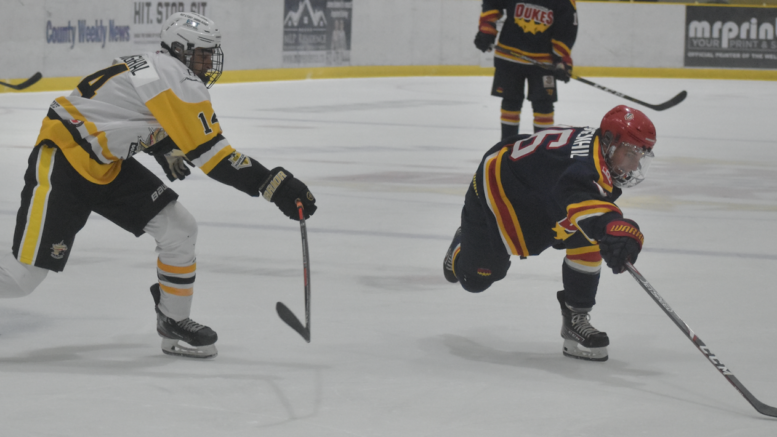 OUT OF REACH Wellington's Jacob Vreugdenhil tries to control a puck as well as stay away from the stick of Trenton Golden Hawk Trystan Mughal during Friday night's loss. (Jason Parks/Gazette Staff)

After a less than stellar start to the season, the Wellington Dukes are a team searching for answers.

The club has been bitten by the injury bug hard in the early going of the 2021-22 campaign and the uncharacteristic lethargy that seems to creep into key sequences of contests has been alarming.

But the question remains- is this up-and-down start part of a heavy dose of rink rust after a year of inaction? Are the injuries too much for the locals to overcome in the tough East Division?

It’s likely difficult for coach Derek Smith to pinpoint the exact cause at this juncture and perhaps the truth is somewhere in the middle. However a team that was expected to battle for the Division title has some ground to make up. Post haste.

Wellington was able to right the ship momentarily on Tuesday afternoon, besting the Lindsay Muskies in overtime 2-1 but it’s been all down hill since then.

The Dukes got an eyeful of the high flying North York Rangers the following evening and were whitewashed 6-0. 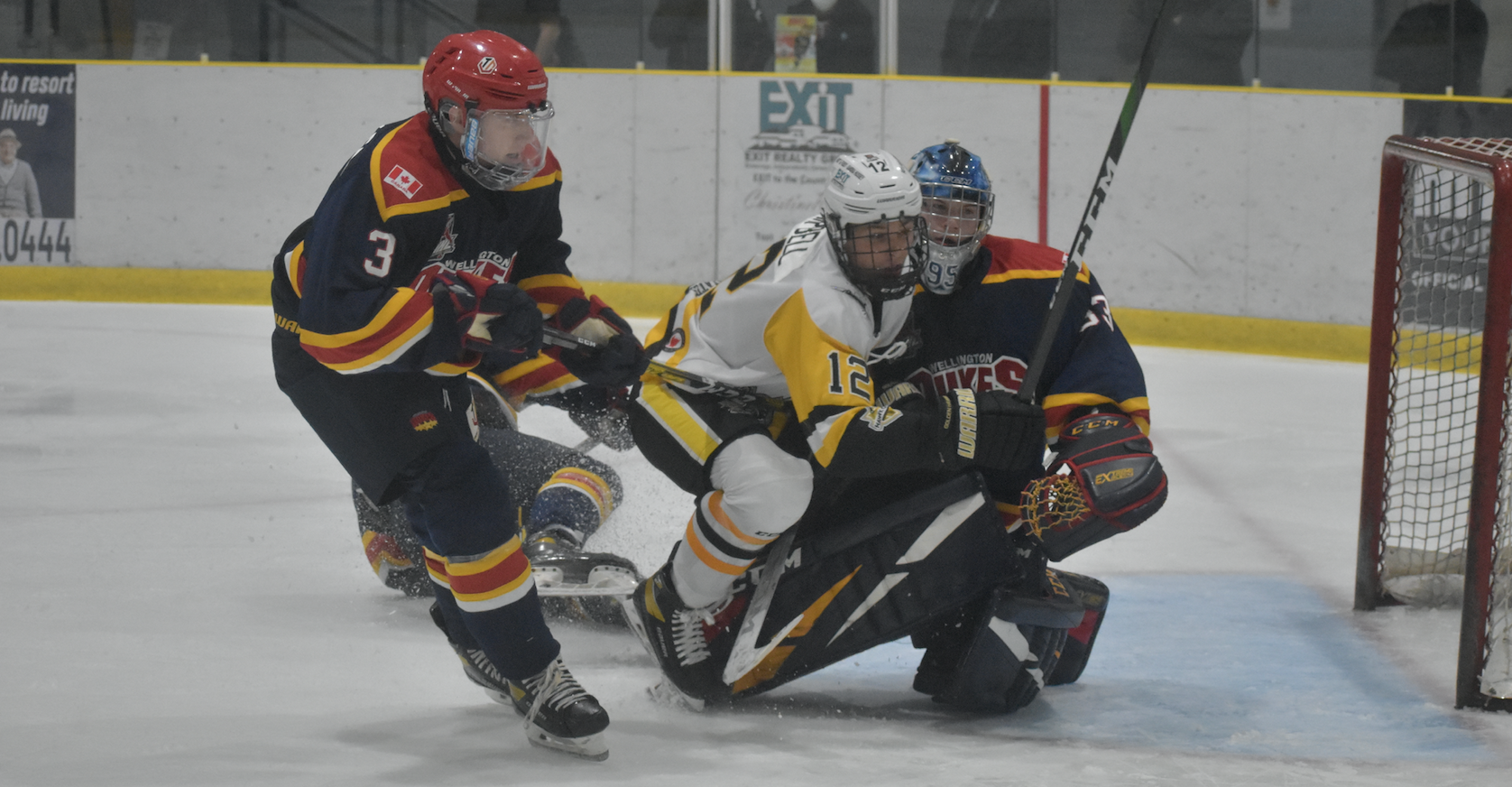 Worse yet, Wellington followed that effort up with a 7-4 loss to the division leading and still unbeaten Trenton Golden Hawks at Lehigh Arena Friday.

Finally, the locals suffered further damage on Sunday afternoon as the Muskies came back to chomp on Wellington and send them below the .500 mark for the first time this late in a season since…well, a very long time.

It seems alien to write it but the Dukes’ lone win in a four game stretch came with the bizarre timing of a Tuesday afternoon game in Lindsay.

Wellington would lead the game for exactly 20 seconds before winning in double overtime as Matt Dunsmoor and Ethan Fraser were sensational in their respective creases.

Fraser is a Quinte Red Devils grad who has ties to Prince Edward County through his parents.

Wellington’s Harrison Ballard would redirect a Emmet Pierce feed at 18:21 of the first to push the locals ahead 1-0 however, in the next shift, Mael Plante would counter for the Fish 20 seconds later to knot the game up at 1-1.

After the game went past the first four-on-four extra session, the contest was decided in the three skaters aside session.

Rearguard Jacob Dietz would find Payton Schaly at 2:29 of period five to list Wellington a win.

On Wednesday, Wellington may have been better off to mail two points care of the North York Rangers to the Herb Carnegie Arena then travel the 401 into the Big Smoke.

The Blue Shirts fired 37 shots on the Wellington net and an early volley would stand up as the winner.

Just 40 seconds into the game, George Fegaras beat Dukes starter Ethan Morrow in a goal that would wind up being the game winner.

On Friday and in front of a playoff-sized audience, the Dukes and Golden Hawks played a back and forth contest that was tight until the visitors broke the game open late.

Wellington would score the only goal in the first as Jonathon Balah was set up by Jacob Vreugdenhil and AAA call up Will Poot at the 3:16 mark of the first period.

The clubs would trade goals and delight the over 600 in attendance in the middle stanza.

Bancroft would bang home a rebound off the stick of Jacob Campbell at 3:44 to retie the game at 2-2 but Pierce’s second of frame at 8:10 put the Dukes ahead 3-2.

With the hour growing late, Jake Lavile’s first of two in the game ensured the teams went to the dressing room tied at 3-3.

Early in the third, Taylor would mishandle the puck behind the Trenton cage and Poor was able to spot a streaking Vreugdenhil in the slot for a goal that pushed the hosts ahead 4-3.

But the Dukes ran into penalty trouble and at 7:16, Aiden McIntosh would score to make it 4-4.

Stunned, the Dukes then allowed LeVille to give the Golden Hawks their first lead of the game just 37 seconds later.

Matthew Cato had the dagger for any designs of a Dukes comeback at 17:25 and then Stephen McDonald topped off the period in fine from, adding an empty netter with about 90 seconds to go along with a pair of helpers.

Trenton heavily outshot Wellington to the tune of 46-18.

On Sunday, the Dukes continued their winless streak in a 3-1 setback Lindsay.

Cam Kosurko put Wellington ahead in the first with a nifty shorthanded effort that Fraser couldn’t handle at the 7:00 mark.

But by the end of the second, Wellington was in a familiar place, looking to get back into the contest.

Later in the second with just 50 seconds left, Jakob Morier would capitalize on a Wellington turnover and score what would be the game’s winning goal.

Down a goal through the third, the Dukes lifted Morrow for the extra attacker and Duncan Scallion put the hosts to bed with an empty netter with 42 seconds left in game.

Wellington takes to the road this weekend to try and figure things out. On Saturday, the locals are in Minden to take on the Haliburton County Huskies.

On Monday and Wednesday, the Dukes are in Cobourg to play in the Governor’s Showcase, taking on the Toronto Patriots and the Toronto Jr. Canadians, respectively.