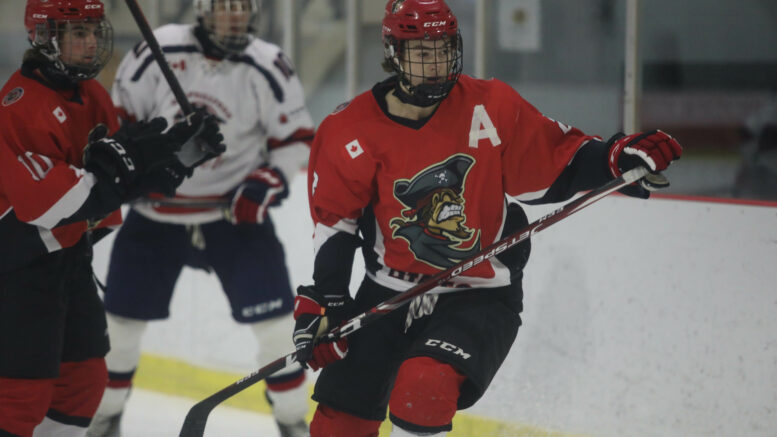 Picton's Landon McLellan is off to a blazing start this season, having scored eight goals in just four PJHL games. (Shawna Adams for the Gazette)

The Picton Pirates were unable to shake a poor opening period and fell 3-2 to the visiting Napanee Raiders in their only action of the week.

Picton saw their record drop to 3-1-0 while the Raiders rolled over the weekend, picking up three wins and remaining as the Tod Division’s last unbeaten club in the 2021-22 season.

Picton certainly had chances to tie the game late with Picton starter Tyler Hayes on the bench for an extra attacker but were unable beat Raiders net minder Mitchell Bown.

Pirates General Manager Jason Parks said it was a good test for the Pirates who were without defence man Derrick Vos and forward Nate Boomhower, the latter of whom is set to return to the lineup this Friday in the return match in Napanee.

“As frustrating as our start was, the players responded and gave a good showing in the last 40 minutes,” Parks noted.

Napanee started early and it was Ben Chubbs beating Hayes 1:13 into the contest to stake the visitors to a 1-0 lead.

Picton had a couple of opportunities to get on the board in the frame including a breakaway opportunity for Brayden Adams but Raiders starter Bailey Maracle was equal to the challenge.

With just over two minutes left, Isaac Brown was able to set up Reid Lambert on a one timer Hayes had little chance on to make it 2-0 after one.

Picton responded later in the second after Maracle left the contest favouring his right leg/hip.

Pirates sniper Landon McLellan took a nice Noah Brant pass at the 17:19 mark of the second and beat Bown to make it 2-1 after 40 minutes.

A thrilling finish was diminished somewhat early in the third however as Beckett Palmer-Stephen  was left wide open on an odd mind rush and former Pirate Matt Poole was able to set up the Raider’s shooter for their third of the game.

Napanee’s Maverick Labrie got the gate in the late going for a major head check penalty and McLellan was able to notch his Tod Division leading eighth goal of the season in Picton’s fourth game.

“Landon has been laser focussed so far this season,” Parks said. “His attention to detail and finding quiet spots on the ice to strike are part of the reason he’s been successful thus far.”

Picton had chances in the late going and tested Bown a number of times but through sheer will and bounces of the puck, the Raiders denied Picton an equalizer.

“Nobody in our dressing room is ever going to be happy after a loss and there were some frustrated players,” the GM said. “On the other hand, it’s not a mystery on how and why we lost and there are some corrections to be made.”

Picton will host Port Hope for the Panthers first visit to Huff Estates Arena on Thursday before heading to Napanee on Friday.

Picton wraps up its busiest weekend of the season on Sunday when the Pirates sail into Amherstview to parlay with the Jets.

ON BOARD WITH THE PIRATES: Vos was out of the lineup due to illness but was back at practice on Sunday…Picton formally AP’d County Kings Ben Smith, Liam Rice, Gerrit Kempers and goaltender Aaron McMullen Sunday. The U18 Kings were victorious in their first game of the OMHA season, a 4-1 win over Douro on Saturday.