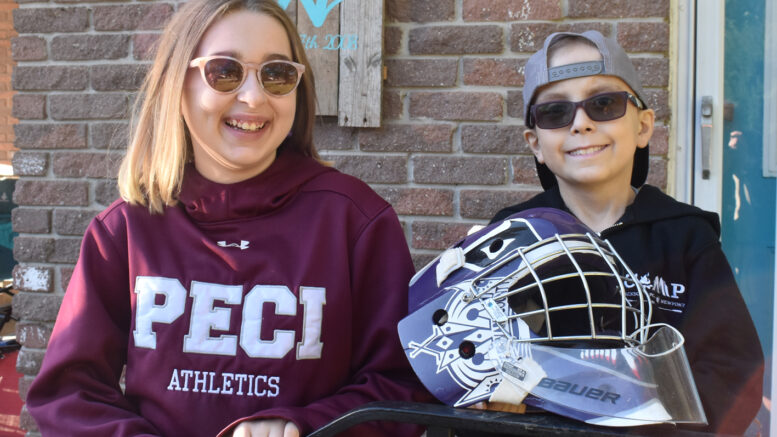 With his sister Kelsie by his side, Robbie Watson shoots a grin at the Watson home Tuesday. Robbie, 10, is fighting brain cancer and continues his treatment in Kingston next week. His family wants to thank the Prince Edward County community for all the support they’ve received over the last three months. (Jason Parks/Gazette Staff)

A Picton family is wishing to express their thanks and gratitude to a loving community who have assisted them in their darkest hour.

Robbie Watson, 10, should be thinking about school projects and tending the “mesh mansion” in his next minor hockey game. But instead of grades and goals against average, Abby Watson is keeping track of her son’s chemotherapy appointments and blood levels. Robbie’s mother can recall the stretch of five days in July when her child just didn’t seem himself.

“Something was wrong and he just didn’t have any energy,” Abby told the Gazette.

Emergency Room physicians tried the normal routes of treatment for typical childhood maladies. But on Robbie’s fourth visit in five days to Prince Edward County Memorial Hospital, Dr. Harrison Bishop saw Robbie. The youngster’s pupils were dilated and “he wasn’t with it.”

The local family physician decided to run an ultra sound on Robbie’s eyes. 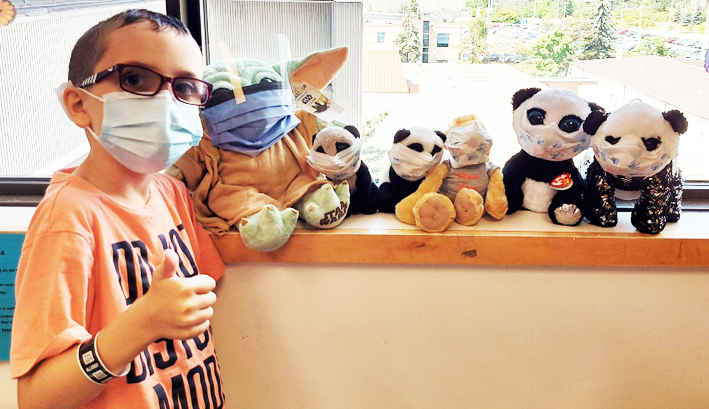 “After doing ultrasounds on both eyes, Dr. Bishop was able to give me a partial diagnosis right in PECMH and he told me he was 90 per cent sure Robbie had brain cancer,” Abby recalled.

Her son, who had been unresponsive for most of the visit, looked up and said “It’s okay, I’m not going anywhere” and gave a thumbs up.

The Watson family were directed to Belleville General Hospital for a CT scan while Dr. Bishop played quarterback from PECMH in the early morning hours.

“Dr. Bishop called me when Robbie was on the table for the scan in Belleville and confirmed it was a tumour,” Abby said. “Then he called me back and said we would be on our way to the Children’s Hospital of Eastern Ontario and I will figure out a way to get you there.”

“Then he called me back again 30 minutes later and said Robbie and I were taking a helicopter ride at 8:30 in the morning,” Abby said, her voice relaying the emotion and chaos of the moment just three months ago.

“My dad was pretty jealous,” Robbie piped up with a laugh.

Tests, scans, imaging all day at CHEO allowed surgeons to place a shunt around the tumour, allowing blood to start flowing properly and easing the pressure in Robbie’s brain. Robbie’s pupils went back to normal size and his vision is slowly getting better through each round of chemotherapy that’s administered at Kingston General Hospital.

“He still doesn’t full movement of his eyes yet,” Abby said.

“But it’s getting better,” Robbie added quickly, offering this reporter a glimpse of the spirit that’s sustained him thus far through his treatment schedule.

In total, Robbie will have six rounds of chemotherapy and then radiation at CHEO to try and shrink the tumour. Some rounds are as an outpatient however others require a five and half day stay at hospital in Limestone City. So far, the prognosis for Robbie’s recovery is good. A

“The tumour is staying the same in size which is good that it’s not growing and then we will have radiation to shrink it after chemo,” she explained.

With a brief pause between treatments, the Watson family wanted to publicly thank every person, family, spiritual leaders, business and service clubs as well as those who contributed to the Gofundme account.

“This is something you never think is going to happen to your family and when it does, it comes in waves,” Abby said. “But Robbie is still Robbie and we just keep moving forward through all the steps.”

But without the community stepping up and supporting the family, Abby shudders to think where they would be.

“So many businesses and people we don’t even know dropping stuff off at the house,” Abby said. “They are all very nice!” Robbie exclaimed.

While the list is far from complete, Abby mentioned Joseph and Donna Ludlow of the Salvation Army and Peter and Gil Spragg of Emanuel Baptist as well as Tasha and Shawn Wadforth for creating the Gofundme page that has now been closed after raising around $10,000.

“The Elks, the Rotary Club of Picton and the Matt Stever Fund, Prince Edward County Fire and Rescue, the Picton Kinsmen, Tears Mean Love, Prince Edward County Minor Hockey Association and the Cherry Valley Women’s Institute, Bikers for Christ and everyone who has sent contributed or sent us well wishes…I know the list is longer than that but we really wanted to make sure the community knew we are so thankful,” Abby said.