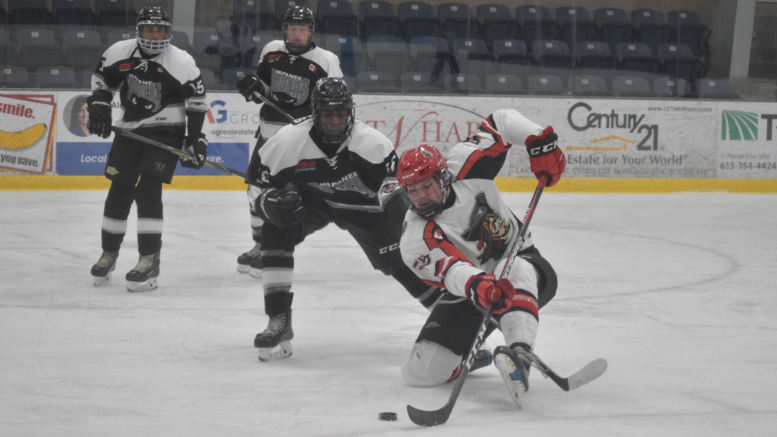 Picton's Nate Boomhower tries to get around Napanee Raider Ethan Williams Friday night at the Strathcona Paper Centre. Boomhower scored in his return to the Pirates line up but the club dropped a 4-2 decision. (Jason Parks/Gazette Staff)

Facing their longest stretch of hockey in 18 months, the Picton Pirates had a strong opening act at home Thursday but couldn’t build off that momentum and dropped a pair in Napanee and Amherstview, respectively.

The 1-2 weekend dropped Picton’s record to 4-3-0 and into a tie with Amherstview for second place.

“It was a tough weekend and offence was tough to come by,” Pirates Head Coach Kyle Hawkins Schulz said. “Despite the score in Amhersteview, (4-1) I thought we played a pretty solid 60 minutes, we were just unlucky around their net.”

Picton might have had an inkling of their luck on Sunday late in the first period. After Liam Lochhead made a nice defensive shot block, the puck caromed to Dawson Frost in the slot and the Jets sniper picked the five hole clean on Pirates starter Tyler Hayes inside the final five minutes.

In the second, Picton responded at the 8:07 mark when winger Reese Hancock picked the five hole on Jeremy Piazzi to tie the game at 1-1 and give the Shannonville native his first junior goal.

Hancock was back in the line up this weekend after getting his vaccinations in order. 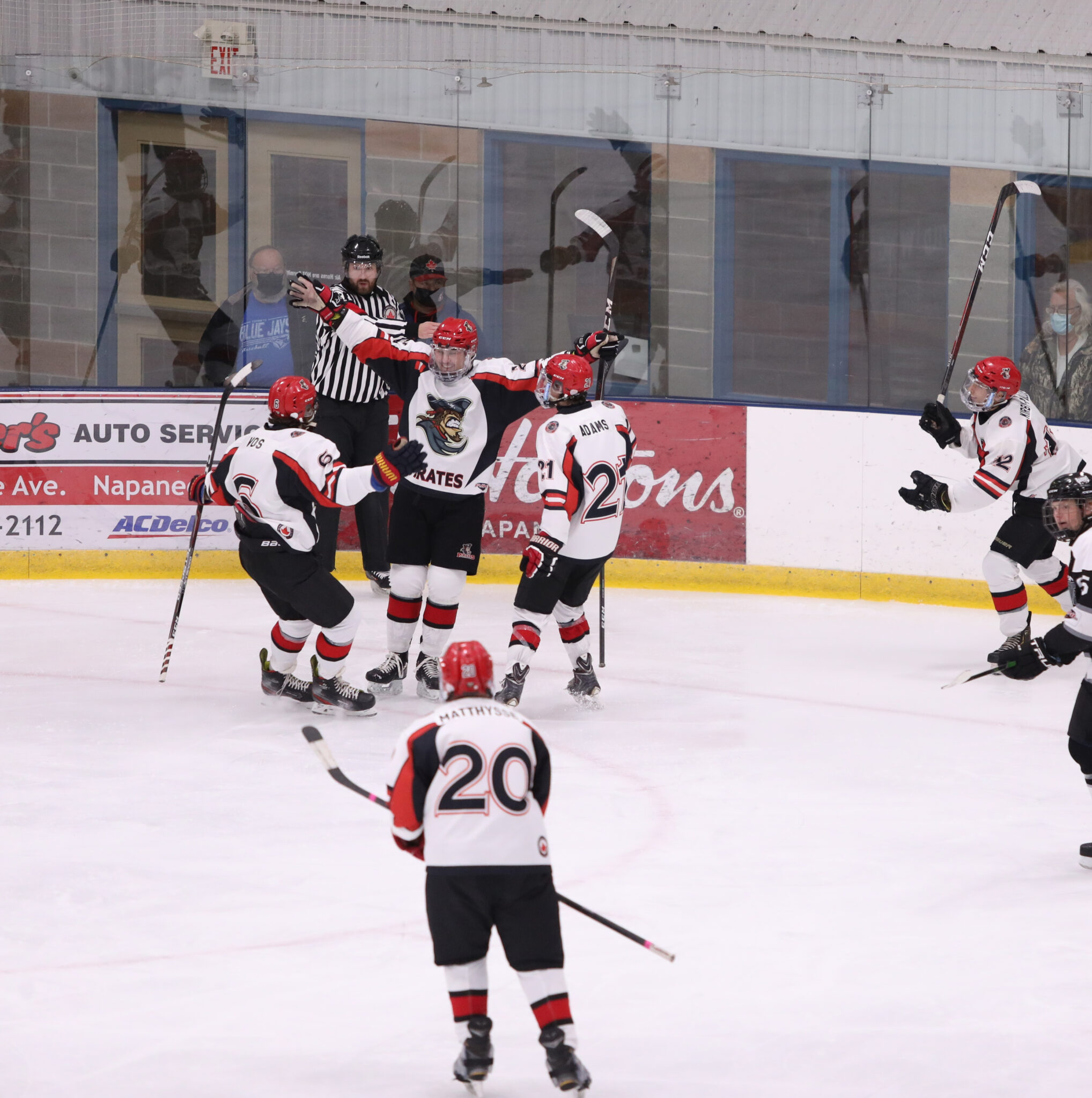 “I think the staff has been really happy with what Reese was able to accomplish this weekend with limited practice,” Pirates GM Jason Parks said. “He was very physical, was smart with the puck and it’s been a revelation to have him back with the team after three weeks away.”

The Jets would regain the lead just under a minute later after Picton was hemmed in their own end for a lengthy period of time.

Artyom Shiman would bury the game winner at 9:04.

Picton had a few glorious chances to tie the game in the late going of the period including a draw play where Hunter Matthysse’s point shot tipped off Landon McLellan, bounced hard in the blue paint and harmlessly into  a surprised Piazzi who held on for the save.

In the third, Shiman’s second of the game gave the Jets some insurance and the hosts put the Pirates away when Mathieu Halle scored on nice individual effort from the goal line on the powerplay.

Parks added he was very happy with the level of physicality from the Pirates.

“We dominated physically and here’s hoping on our smaller home ice Thursday those hard body checks will be investments,” the GM added.

On Friday, the club was in Napanee for a battle in the last two undefeated teams in the Tod Division and Picton came away with their first setback of the season.

Although it wasn’t for a lack of trying.

After surrendering an early goal to Napanee’s Chris Edwards, the Pirates battled back to tie the game at 1-1 as Nick Kirby found Jack Dow near the Napanee net at the 7:06 mark.

The Wallbridge native was able to pick five hole on Raiders goalie Mitchell Bown for square the affair at goal a piece.

“I’ve been so impressed with Dow and his commitment to this organization,” Parks said. “He really believes in this group and whether he has a letter on his sweater or not, he has a presence in the dressing room.”

Tied at 1-1 into the second, Picton had some bad luck to start the middle stanza as defenceman Trot Davis’ stick broke on a play at the blue line and allowed Reid Lambert to set up Issac Brown  to push the Raiders ahead 2-1.

That lead was extended to 3-1 part through the frame when Soren Zamnuer potted a power play goal at 9:12.

But Picton battled back and it was Nate Boomhower, in his first game after a lengthy suspension to start the preseason, lugged the puck up the wing and bulldogged to the Raiders net.

After a few whacks at the goal mouth, the Belleville native had his first of the year with just 42 seconds left period.

“Boomer has had some time to reflect on himself, this organization and the fact his last year of junior hockey is front of him,” Parks said “Through injuries and everything else, he hasn’t accomplished what he was hoping for but the window of opportunity is still there for him and you can tell there’s been some maturation going in these last couple of months. It’s incredibly encouraging to see.”

Picton had some looks early in the third but it was obvious playing the second game in as many nights for the first time in two years made them easy foils for the rested Raiders.

Picton gambled with a pull of Hayes with 40 seconds to go that ended up with an empty netter for the law offices of Beckett Palmer-Stephen and the Kingstonian had his fourth of the campaign to make the final 4-2.

Picton’s lone win came at home on Thursday when they shaded the Port Hope Panthers in overtime 3-2.

The Pirates finally got to Thompson in the second when Landon McLellan set up Noah Brant at the 4:33 mark to push the hosts ahead 1-0.

The Panthers rallied later in the period when Oz Paziuk let a quick shot go from the half wall that beat Pirates starter Nolan Lane who had to be sharp in the frame, making 14 stops.

In the first minute of the third, Paziuk’s point shot deflected off a Picton defender for a Panthers powerplay goal and a 2-1 lead.

But the Pirates battled back as Dow set up rookie Cole Stevenson for his second of the year at 8:13.

The clubs remained deadlocked through the end of the third, forcing overtime.

At the 1:20 mark of the extra period, Dow would snap an winner over the shoulder of Thompson to give Picton the extra point.

The Pirates welcome the Jets for the back end of a home and home on Thursday night and then travel to Campbellford for their first game in the Trent Hills since February, 2020.