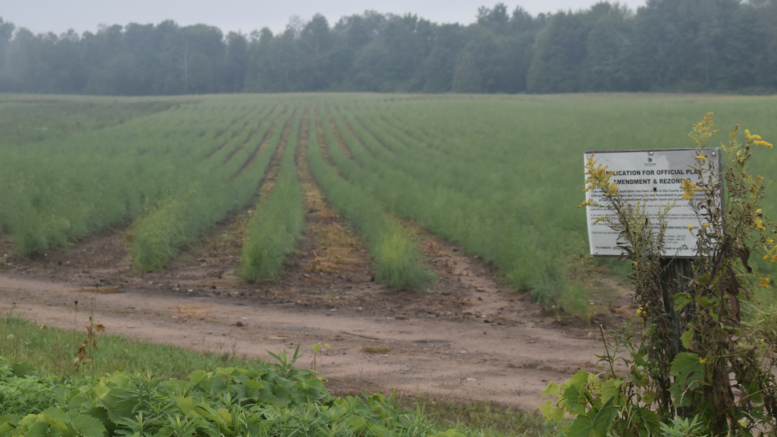 An agreement between those objecting to the development of a pit operation on Ridge Road and the proponents of the associated zoning change that would see agriculture land converted to aggregate extractive was reached earlier this month on the first day of a Local Planning Appeal Tribunal meeting.

Local residents concerned about what an aggregate operation would mean to the well water levels surrounding Green Ridge Farms where part of the asparagus operation would be converted to a sand and gravel extraction business were preparing to make their case Oct. 5 to the LPAT against a 2019 municipal approval of the rezoning application that would allow the Greer family to start a pit operation.

The business had applied for a Category 7, Class B licence for the Removal of aggregate at 1002 Ridge Road. However, just before the hearing could commence, the applicant offered the objectors to install four monitoring wells across the site to record water depth for a period not less than six months the spring of 2022.

In addition to the wells, the Greers offered to install an approved turtle exclusion fencing to keep out Blanding’s turtles, a protected species in the area.

An Adaptive Management Plan has also been created to ensure ground/water separation. Ultimately, the tribunal began and ended on October 6, 2021 where both parties agreed to a “Minutes of Settlement” including the offers from the pit proponents and the requirements demanded by the Aggregate Resources Act.

The bottom of the pit is now set at 86 meters above sea level and one of the objectors, John McKinnon told the Gazette once the data from the monitoring wells has been assembled, two hydrogeologists will review information and determine where the water level actually is and “this will be added to the licence.”

He added the Tribunal’s oral decision to direct the Minister Natural Resources to issue the license on a conditional basis subject to the amendments to the Site Plan is now a matter of public record.

“We did not stop the pit from happening, however, the “Minutes”, much of the initial plan submitted by the applicant, and, the requirements and regulations set out by the Ontario Aggregate Resources Act, will be what will govern the applicants usage of the property. The monitoring wells will protect the watershed as they will robustly measure the water table and this will determine if and when gravel can be extracted. These wells are permanent and a significant win for protecting our water,” McKinnon said.

In a statement to the Gazette, County of Prince Edward Mayor Steve Ferguson said Council approved the Official Plan amendment and zoning by-law amendment in September 2019 with the provision that regular on-going monitoring of the water table via data-logging be a part of the Adaptive Management Plan for the Greenridge Farm Pit.

“We are pleased to see that the Parties have agreed to a Minutes of Settlement. We are encouraged that the proponent has taken into consideration the issues that neighbouring residents raised during this process and is committed to acting to safeguard ground source water and protected species,” Ferguson added.