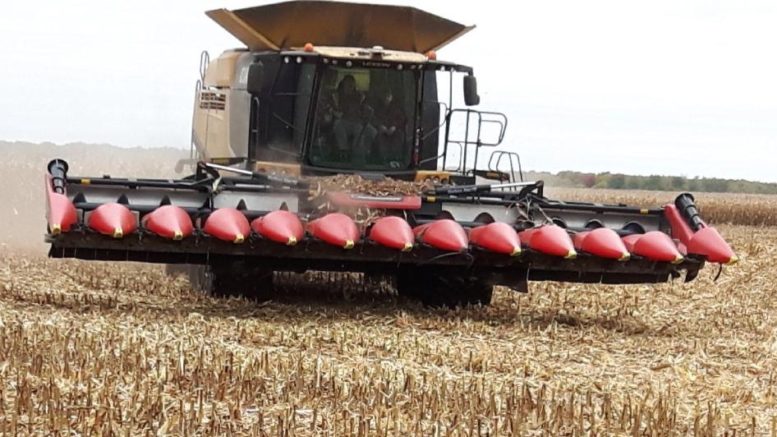 With the world population expected to reach 9.8 billion by 2050, preserving Ontario agricultural farmland is top of mind for the Ontario Federation of Agriculture. Bruce Buttar, Provincial Director of the Ontario Federation of Agriculture (OFA), made a deputation to Prince Edward County council Tuesday night explaining the organization’s plan to preserve agricultural farmland.

Buttar serves on the OFA Board of Directors covering Zone 12 which includes Hastings, Lennox and Addington, Northumberland and Prince Edward counties.

He said he will also be standing in as the Ontario Farmland Trust Director for a period of at least two years.

“The Ontario Federation of Agriculture (OFA) is the largest general farm organization in Ontario, proudly representing more than 38,000 farm family members across the province,” Buttar explained.

He added the OFA contributes over $47 billion to Ontario’s annual Gross Domestic Product (GDP) and is the leading agricultural advocate for Ontario farmers, their businesses and their communities. He emphasized that all landforms and land uses found across Ontario, such as urban, rural, natural heritage, cultural heritage and aggregate extraction, must all share Ontario’s landscape.

“Inherent in this is the recognition that our agricultural areas not only provide us with food, fibre and fuel, but also a broad range of environmental and ecological goods and services that benefit all Ontarians,” he said.

“Approximately half of our land is designated as agricultural,” Margetson explained. “One of our primary projects of the Official Plan is to sustain the County’s agricultural lands and maintain a permanently unfragmented, secure, economically viable agricultural industry. So, I think we have a fairly strong policy to support the protection of agricultural land.”

Buttar said that is exactly the work the OFA likes to see and that in municipalities with high agricultural lands, Ministry Zoning Orders may not be needed regularly. However, he said that is not the case across the province and that the OFA is concerned about the amount of power an MZO has.

“We have heard many times that we are losing our agri-land at a rate of 175 acres per day,” he said. “That equates to about five football fields – that much is being lost every day to development.” He said it must be recognized that there is a finite and shrinking amount of agricultural lands. “OFA believes the highest and best use of Ontario’s arable land is for agriculture,” Buttar added.

He said the OFA believes that the provincial government’s role is to establish the “overarching principles, policies and programs that will guide and direct municipal government on issues relating to land use and the preservation of agricultural lands.”

Buttar said if a current zoning doesn’t work for whatever a local municipality’s goal might be, they must apply for a Minister’s Zoning Order (MZO). He added the OFA endorses the Provincial Policy Statement (PPS) agriculture policies that require municipalities protect their prime agricultural areas for their long-term agricultural use.

“We consider the policies of the PPS to represent the minimum standard in support of protecting the environment, farmland and public health and safety,” Buttar explained. “In fact, OFA has stated that the PPS does not go far enough in protecting our finite agricultural lands. We have recommended strengthening of the PPS in order to require fixed urban settlement boundaries and policies requiring mandatory intensification within the existing built urban areas as well as mandatory ‘greenfield’ density requirements to better utilize infrastructure, improve the financial viability of public transit and protect our prime agricultural lands from sprawl.”

The OFA, he continued, opposed amendments to the Planning Act to provide the Minister or any other planning authority the ability to make planning decisions which are not consistent with the PPS.

“We are concerned that legislative amendments giving the Minister the ability to issue MZOs that are not consistent with the Provincial Policy Statement is short-sighted. Further, it weakens the local planning process by providing developers and municipalities with a ‘workaround’ that could foster bad planning that will cause either individuals or government to incur the cost of dealing with poor outcomes later,” Buttar said.

Though the OFA understands the need for the Minister to have the issuing power of an MZO and have supported the use in areas of the province that are without robust local planning processes, he said the OFA has no objection to MZOs being used within the lands that would be considered the ‘Urban Envelope.’

“Shortening the timelines on services such as long-term care facilities by redeveloping lands within the urban settlement areas makes sense, but this same lens cannot be applied to the use of MZOs to fast-track non-agricultural development agricultural lands,” he explained. The OFA has recommended to the provincial government that the use of MZO powers should be curtailed in areas where there is already a robust planning process in place, Buttar added.

“OFA encourages local municipal councils to refrain from requesting MZOs and to instead work through their approved planning processes in matters concerning agricultural lands and farming communities,” Buttar said. “Land capable of supporting agricultural activities is a finite, strategic, non-renewable resource worthy of preserving for its ability to provide safe, affordable and sustainable food, fibre and fuel.” He said the OFA has a strong voice for its members and the agri-food industry on issues, legislation and regulations governed by all levels of government.

“Ontario’s diverse and innovative agri-food sector is a powerhouse for the province – growing and producing more than 200 farm and food products, fueling our rural communities and driving the provincial economy by generating more than 860,000 jobs,” Buttar told council. Buttar’s deputation on behalf of the OFA was received by County council for information.