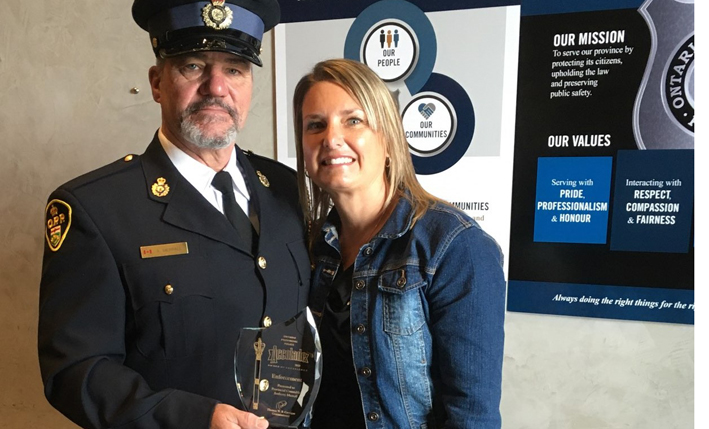 BEST ON THE BLACKTOP Provincial Constable Anthony “Tony” Merrall and his wife Michelle at Orillia on Friday where the Prince Edward OPP member was recognized for his efforts enforcing the HTA. PC Merrall has spent his entire 14-year policing career in Prince Edward County and is slated to retire from the local force in early 2022. (Submitted Photo)

A member of the Prince Edward County OPP Detachment who has been a thorn in the side of lead footed motorists and distracted drivers was recognized by Provincial Command last week.

On Friday Provincial Constable Anthony “Tony” Merrall of the Prince Edward County Detachment OPP General Headquarters in Orillia where he was presented with the 2020 Accolade Award for “Enforcement” by Commissioner Thomas Carrique. PC Merrall received this award for his outstanding enforcement during 2018 and 2019.

Throughout those years, Tony stopped a total of 3,568 vehicles for various Highway Traffic Act (HTA) violations. These traffic stops resulted in 2,374 provincial offence notices, of which 1,956 were for ‘speeding’, 93 for ‘no seatbelt’, and 14 for ‘distracted driving’.

He also initiated 280 R.I.D.E. programs, which helped remove nine impaired drivers from our local highways. It should be noted that PC Merrall ranked first for HTA enforcement in all of East Region for those two years and, provincially, he ranked second in 2018, and third in 2019.

After spending 14 years with the OPP, Tony officially retires on January 30th, 2022- an OPP career spent entirely serving in Prince Edward County. At a recent celebration for Tony’s accomplishments, Staff Sergeant John Hatch noted that being the top HTA enforcement officer in East Region two years in a row is an incredible achievement considering PC Merrall was working at a detachment, which does not have a 400 series highway running through it.

“All of us at the PEC OPP Detachment are going to be very sad to see Constable Merrall retire… but I know that many of the motorists will be happy that they won’t be stopped by Tony out on the highways in 2022,” Hatch quipped.