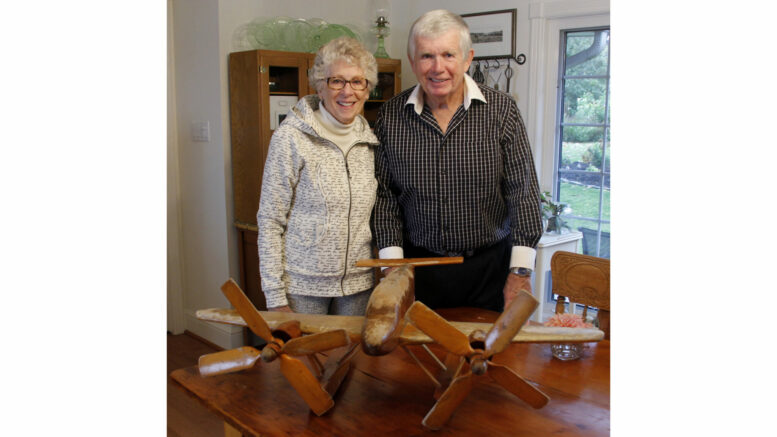 REUNITED Rhonda and Bill Armstrong with their hand crafted float plane found by a neighbour. The 'craft' had been missing for three years after a wind storm took it off its post in 2018. (Desirée Decoste/Gazette staff)

A wooden replica of a float plane that departed in a big blow back in 2018 has mysteriously returned to its owners.

The story of the overdue wooden model in Prince Edward County starts half a dozen years ago when on Vancouver Island where Dr. Bill and Rhonda Armstrong received a float plane made by a patient  in lieu of payment for some dental work.

The couple had the plane mounted on a pole near the water on their property at the edge of Canada’s West Coast and when they moved to The County in 2018, it was fitting the model would be perched over the Bay of Quinte where it served as a weathervane- its propellers clacking and spinning in the wind near the shores.

With just over a season of telling the Armstrong’s what the weather was like up there, one day in September of 2018 after a huge wind storm had come up the the couple were shocked to look out their back window to see their plane had an unscheduled take off!

“My husband thought ‘Could it have lifted it right off the post? or did someone come along?’ Fisherman do come right up to the cement wall so they could lift it off themselves and we thought ‘I wonder if it got lifted by a human or lifted by the wind?’,” Rhonda said. “We never saw it again and we went out for numerous days in a row all along the shoreline, all the way down to the Bay Bridge and then all the way up towards Trenton with binoculars but we never saw it. We felt sad but eventually we forgot about it because we couldn’t do anything about it- it was long gone.” 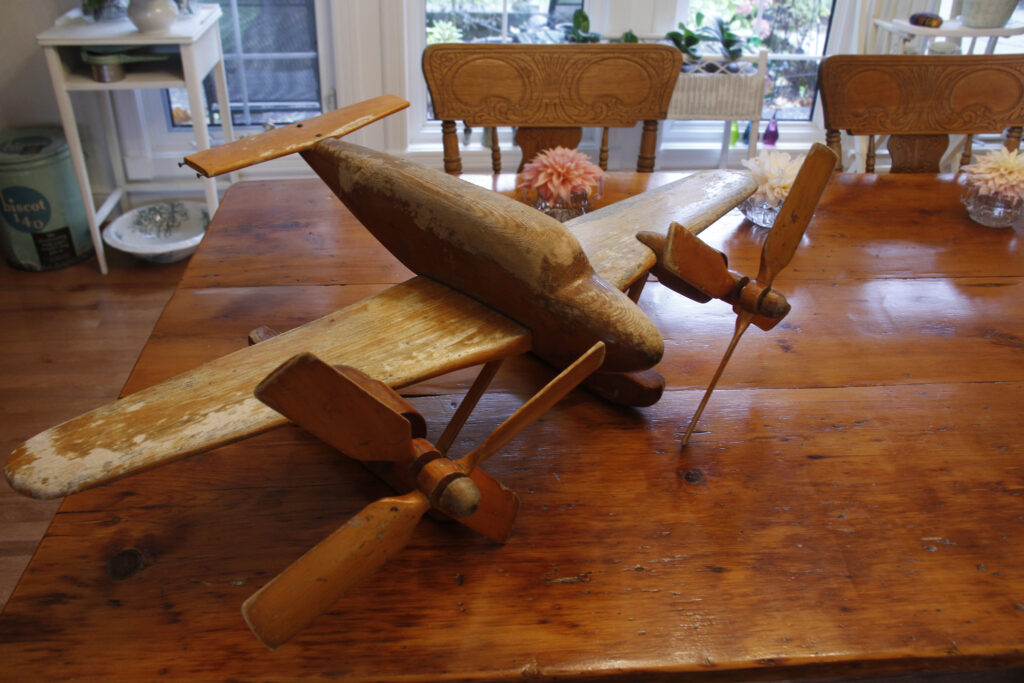 Back in September 2018 when the plane went missing Rhonda joined a Facebook group called The Rednersville Road Neighbourhood Page and posted about their missing plane saying:

‘We are sad to say that our beautiful wooden carved float plane with propellers that turned in the wind is missing from our pole mounted at the shoreline. Maybe the wind lifted it off of its mounting or someone else did. If anyone found it along the shoreline, please call. It has great sentimental value and was carved by a patient in B.C. for my husband. Thanks so much.’

All the couple heard was the initial responses of people saying they would keep an eye out for it and then never heard anything about it again.

Thinking the Bayside Triangle has taken the model to the briny depths,  Rhonda was scrolling through the Facebook group and saw a picture of a float plane that Stephen Worona posted saying:

‘Some hard work went into this unique weathervane but it was found floating in the bay last year. Does anyone know where its home is?’

“I answered him right back and said, I can’t believe you found this,” Rhonda expressed. “This is my husband’s float plane that a patient carved for my husband!”

Worona messaged back saying that a neighbour, Noella, who has Bayhaus Gallery actually had the plane and he found it while cleaning out her shed.

“I drove down to pick it up and we had a lovely chat,” said Rhonda. “She (Noella) said it was actually her gardener who mows her lawn and he was mowing down by the water and he saw this plane and he picked it up and brought it to her She said he shoved it in her shed for the time being. It’s really funny because apparently it was found last year floating in the bay. I can’t even imagine it was frozen in the bay  during the winters of 2018, 2019 and then found 2020.”

Bill and Rhonda are ecstatic about having their float plane back after three years and pointed out while they’ve owned the plane for six years but only had it for half that time.

“I couldn’t believe how far it went in the water,” Rhonda stated. “We also can’t believe it came out in such great conditions because of the ice freezes solid right across to the other side. We think it flipped over because the underside is just still almost pristine, and the whole top and the top of the wings are scuffed.And I don’t know how those propeller blades didn’t brake off as it was banging on rocks on our the shoreline.”

Bill and Rhonda are planning to find someone to refinish the plane and get it in tip-top shape once again although it remains to be determined if the wayward aircraft will once again take to the skies or remain in its County Rd. 3 hanger.