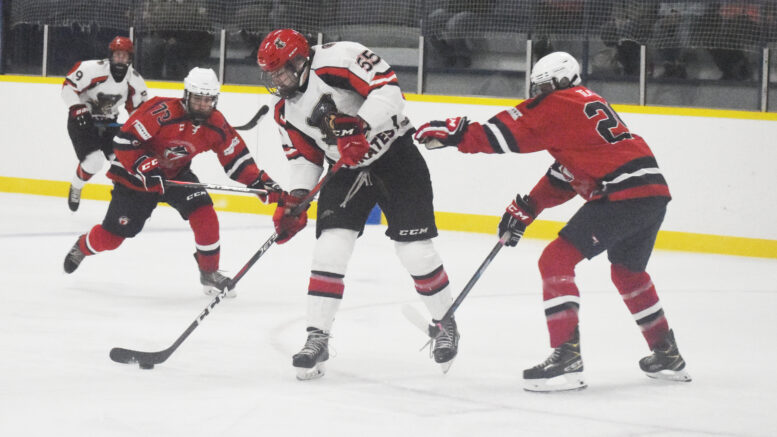 After getting “goalied’ at home on Thursday in a game that had just about everything but an appearance by Wayne Gretzky, the Picton Pirates found an opportune time to get the office rolling and snap a three game skid on Saturday in Campbellford.

Picton’s Nate Boomhower had a pair of goals in a 7-2 romp at the Campbellford Seymour Community Centre to help pace the Pirates offence.

“It was nice to see pucks going in after Thursday night,” Pirates head coach Kyle Hawkins Schulz said. “With the exception of five minutes at the end of the first period, we put together a pretty strong effort and were full value for the win.”

Boomhower opened the scoring early in the first when he bulldogged his way into the Rebels zone and snapped a puck past Rebs starter Cameron Hansen.

Picton had plenty of chances to extend that lead on a power play later in the frame but Hansen made a tremendous save on a low shot off the stick of Noah Brant.

Campbellford would score late in the first as Picton was caught running around in their own end. 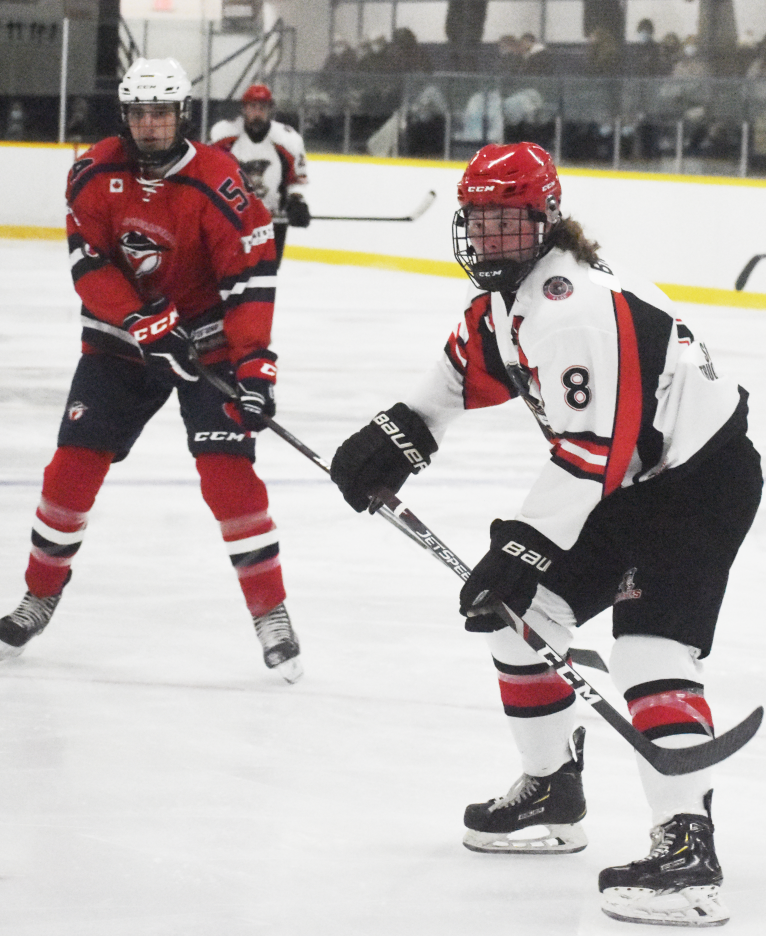 Picton net minder Nolan Lane had managed to freeze a puck against the post but a whistle indicating a stoppage never came and, eventually, Connor MacGregor shovelled a puck over a prone Lane and through a maze of legs at 16:30 to make it 1-1.

Not wanting a repeat of Thursday night, a hungry and determined Pirates squad scored early and often in the middle stanza to put the contest out of reach.

Boomhower would set up Jack Dow 3:13 into the stanza to give the Wallbridge native his fourth goal in five games.

Just over a minute later, Landon McLellan potted his ninth of the season in his ninth game to get the Shannonville native back on a goal-per-game pace.

The goals continued to flow of the Pirates as McLellan would set up Brant for a strong backhand effort near the crease at the 8:02 mark.

The Rebels would get one back at the midway point of the frame as the Pirates were tardy on a change just after a power play chance and Adam Klass was able to beat Lane clean at 10:46.

But Picton answered at the 14:11 mark as Ian Harrison picked up his second helper of the night when he spotted Boomhower above the crease and a one timer beat Hansen low to make it 5-2 Picton heading to the second intermission.

The Pirates were determined to settle this one early and if the Rebels had any ideas of a three goal comeback, Owen Dever dashed them with a nice one timer off a Brant pass 1:23 into the third to make it 6-2.

The game got slightly ragged late in the third and Picton’s Nick Kirby took a double minor and an extra two minute misconduct with just under six minutes left.

The Pirates got some great milage out of penalty killers such as Brayden Adams, Aidan MacDonnell and Cole Lavender as well as some big stops from Lane to negate any uprising the Rebels might have initiated.

Serving Kiby’s fouls, Liam Lochhead sprang from the sin bin, leading a rush and picked up a nice helper with 20 seconds left as Morrison bagged his third go the season to go along with two assists for a three point outing.

“It’s great to see the vets starting to buy into what we want to try and accomplish here,” Hawkins Schulz said. “Dever has had some real jump to his game and guys are getting rewarded for working hard and taking care of their end.”

Lane made 38 saves in the Picton net for his third win of the campaign and after the contest, the Wellington native was made aware that he and fellow 17-year-old freshman Cole Stevenson have been selected to represent the PJHL Eastern Conference at the league’s prospects game in Orillia Dec. 11.

Picton hockey fans were treated to an expectational game on Thursday night that was tied 2-2 well into the third period and nearly went the Pirates way if not for a post and the netminding of Jeremy Piazzi.

Tied 2-2 partway through the third, Boomhower snapped a puck past Piazzi that clanked off the short side post.

With less than ten minutes left in the third, Amherstview would pull ahead to stay off a draw play to the left of Picton’s Tyler Hayes. Jets defender Zack McMahon would bank a puck off a body in front of the Pirates net at 13:08 to make it 3-2 in favour of the visitors.

Boomhower would again get a glorious look at the Jets cage in the late going off a scramble but couldn’t find an opening. Piazzi had a number of ten bell saves to keep his club ahead and then with 30 seconds left, Dawson Frost iced the contest with an empty netter to make the final 4-2.

But a scary scene in the first period had both teams on edge and likely helped to ensure tempers wouldn’t flare beyond the typical pushing and jawing after whistles.

Early in the first, Amherstview’s Kwmai Julien levelled a hit on a Picton skater. An errant skate blade on the Pirates forward came up and sliced into Julien’s leg, nicking an artery near his ankle.

Back on the Amherstview bench, Jets Trainer Todd Conley was quick to start addressing the dangerous situation however, a teammate eyeballed the bloody and gruesome scene and was overcome by nauseousness and passed out, striking his head.

Picton trainer Lindsey Stakes was pressed into service, running along the ice to the Jets bench and a pall quickly fell over the Huff Estates Arena as both trainers went to work.

“You never, ever want to see trainers running in all directions like that and it’s a very scary time when it happens,” Pirates GM Jason Parks said. “Across the ice, you know it’s serious but no one is really sure what’s happening and you are just hoping for the best.”

Eventually, Julien was stabilized and brought to the Jets dressing room while the fallen Jet on the bench was revived and attended to as play quietly resumed.

In the Amherstview dressing room, Pirates executive and retired family physician Cliff Rice saw to Julien while paramedics were on route.

“On behalf of the Amherstview Jets’ players, bench staff, and the executive, a big thank you to your Trainer, Lindsay Stakes and your Executive member Dr. Rice, for their assistance with our injured player Kwami Julien,” Jets President Don Ley said in an email.  “With the quick reaction of our Trainer, Todd Conley, and Lindsay, they reduced the amount of blood loss Kwami suffered.  He is expected to start skating again next week.”

Thanks to the great staff and quick response at Prince Edward County Memorial Hospital, Julien had returned to the rink by the second intermission with seven stitches and was seen smiling with his teammates.

Julien missed all four goals that had the teams tied through forty minutes.

Inside the final minutes of the first, Raymond Beniot was able to bank home a shot from behind the blue line to give the Jets a 1-0 lead but Picton responded less than a minute later as Morrison was able to bang home a Boomhower feed at 17:45.

In the second, the Pirates grabbed their first lead as Dow collected a rebound his upper body, drop the puck at his feat and fire a one timer that whizzed past Piazzi.

Benoit was at it again later in the second, snapping home a short handed effort at 10:36 to make it 2-2.

Piazzi would go on to make 38 saves including 19 in the final 20 minutes in the win while Tyler Hayes had  36 stops.

“One of the players skating off after them game said it was the weirdest hockey game they had ever been a part of,” Parks said. “There was no faulting our effort, we felt like we maybe deserved better late in the period but you have to tip your hat when a player steps up like Jeremy did.”

Picton hosts Frankford for the first time this season on Thursday and then heads to the Husky den on Saturday.