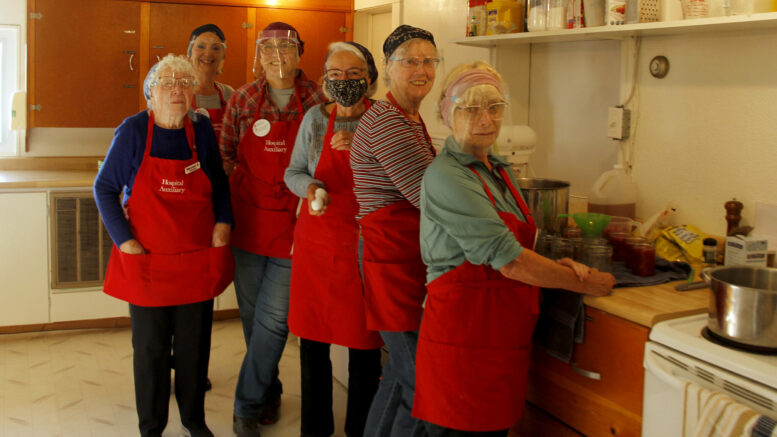 The ‘Perfectly Preserved’ team, a group of members of the Prince Edward County Memorial Hospital (PECMH) Auxiliary, have been working hard in the kitchen at South Bay United Church making preserves and baked goods in order to raise funds for a new portable heart monitor for the Endoscopy Department at PECMH.

“We were selling everything at the Festival of Trees in a two-day span so it was a bit of a scrum,” said Beverly Thompson, member of the Perfectly Preserved team. “It was very crowded, you didn’t get to talk to your customers very much because there was other ones in line behind them.”

Since the pandemic the team lowered the number to six team members and has been selling their products at various markets around the county. Team members include Laura Bryan, Denise Linnett, Maureen Rudd, Dorothy Speirs-Vincent, Beverly Thompson and Jane Winwood.

“When covid struck us we had to do things differently and that was just a wonderful boost to us because we started that year thinking maybe the Festival of Trees would go ahead so we had a lot of product in jars that we had made here, I think we were about 1,600 jars that year,” Thompson stated. “But by the time they made the call that the festival of trees was not going to happen in its traditional way, it was going to be a virtual event we thought well we have to get rid of this stuff and we started going to markets and we had a lot of fun going to the markets. Found it to be less work then hauling everything out to Isaiah Tubbs.”

The Perfectly Preserved products range include jams, jellies, pickles, sauces, chutneys and other preserved goods as well as a large range of baking. This year the team has made 1,800 jars, most of which are already sold.

Much of what the team preserves has been donated by the community, including asparagus, blueberries, currants, tomatoes, crab apples, apples, grapes and cucumbers. The community has also responded to their request for empty jars which they can reuse.

“We have a bit of a presence in the community now and its been wonderful,” expressed Dorothy Speirs-Vincent, member of the Perfectly Preserved team. “People this year have been extraordinarily generous giving us produce for example, its been a good year. So we’ve managed to go through the whole year, starting with asparagus back in May and rolling on through and its been wonderful.”

For more information or to order from the Perfectly Preserved team please visit https://www.pecfestivaloftrees.ca/festive-foods-order-form