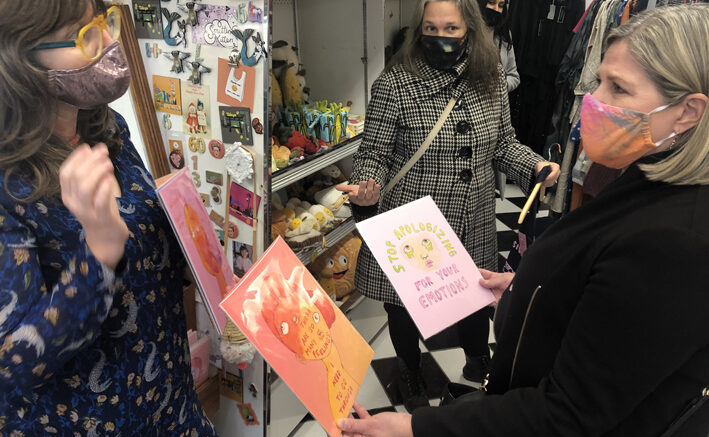 Horwath joined with local Bay of Quinte NDP candidate Alison Kelly stopping by a number of local businesses including Kelly’s and Stella Eatery as well as a meeting with Prince Edward Chamber of Commerce Executive Director Lesley Lavender.

While local businesses and business leaders were intrigued by the proposal that would spur off season tourism, the leader of Ontario’s NDP party heard first hand local businesses need other supports as well.

Between meetings, Horwath spoke to the Gazette at The Armoury and said the opportunity for back-and-forth discussion with county businesses and leaders was invaluable. 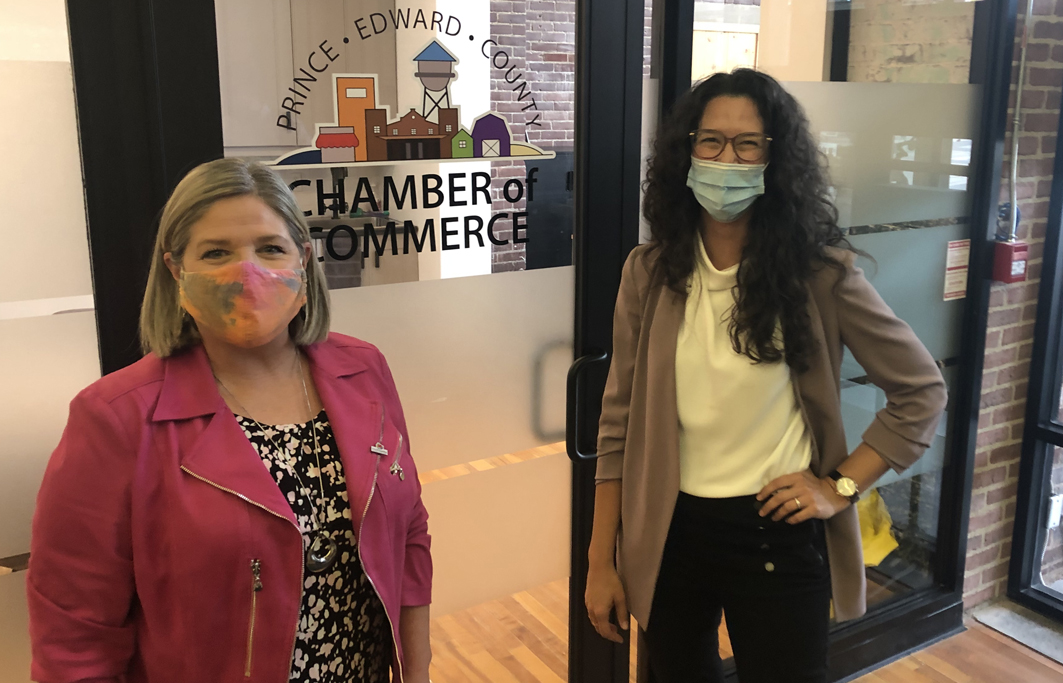 “I’ve really heard from some of the businesses owners and leaders about the challenges their employees are facing when it comes to affordable housing. When potential employees can’t find a place to live, it’s really tough for that business to be successful,” Horwath said. “Access to a local workforce is critical and I can appreciate some of the programs and initiatives the Chamber and members have developed to help address this problem.”

Horwath mentioned the ‘Shift Yourself’ program that helps match employers and the hours they need covered with a potential employee base, matching up the right skills at the right locations when needed.

“Overall there’s a lot of great tourism happening here and this summer was another great one but there needs to be mechanisms in place that help stabilize that economy throughout the year,” Horwath added.

One mechanism that would surely help local businesses would be a provincial affordable housing strategy and Horwath said the NDP would be reacquainting Ontarians with their plan in the coming weeks. Horwath touted the plan as an adaptive and responsive initiative that will rely in municipal input.

Among the overarching branches that will work in most regions is a direct assistance plan for first time buyers that would see 10 per cent of a home’s value paid back to the purchaser.

“We want to make sure young people can enter the market and this would be through a 10 per cent shared equity loan that’s not payable back to the province until the property is sold or the owners move,” the leader explained.

Mechanisms to cool off scorching house prices and getting some of the speculation out the market by way of taxes for non-residents and vacancy taxes that ensure homes are utilized and not left vacant as an asset are other tools that could be available to municipalities.

“We also have designs for traditional affordable housing where people are making payments based on their income and supportive housing where people will be able to remain in their homes,” Horwath said. “We have a robust and complete plan that covers the entire spectrum of housing needs in Ontario and the reason this works vor the various places in the province as well as hear is that you can pull the pieces of the plan and implement the policies that will work for Prince Edward County.”

As tourism continues to be a key economic driver, Horwath said she was impressed with how well shoulder and low seasons were being presented to potential tourists as the best time to come for a visit.

“In terms of what the Prince Edward County Chamber of Commerce has been doing to try and balance or stagger the visits to Prince Edward County so it’s not so much in the high season of summer and that $300 million tourism economy can be spread out is a great initiative I applaud,” she said.

Other topics the leader touched on while in Ontario’s second oldest community per capita was the issue of for profit Long Term Care homes. Horwath said under her leadership “every single public dollar that’s invested by the government goes to front line services and bedside care.”

“Seniors in this province deserve nothing less than that and we’ve seen the horrifying situations during the pandemic where 4,000 seniors lost their lives to COVID -19. For profit LTC homes had a much worse track record than not-for-profit homes so the committment we’ve made is that we will transition LTC and Seniors care to not-for-profit and municipally run scenarios. Private companies profiteering off of seniors has to stop,” Horwath added.

The NDP Party of Ontario has big plans to bring 50,000 new LTC beds to the province but through a thoughtful design and process.

“Right now there’s these warehouse-like settings that aren’t home. We need 50,000 beds but lets change the model so its more community oriented. We are looking at European models that are smaller and clustered like communities and we want them to be culturally responsive that includes connections to the regions around them.The Government of Ontario needs to show seniors they matter and their contributions that made Ontario what it is today are never forgotten.

On that note, Horwath was queried about news the province would be tendering for the outsourcing of Ontario Works and the Ontario Disability Support Program.

“The current government doesn’t believe in government or public services at all and we don’t believe for a second that private companies should be profiteering off the most vulnerable of Ontarian. Seniors that need home care, people who are on ODSP, they all deserve to have dignity and quality of life and everyone’s situation is different,” Horwath said.