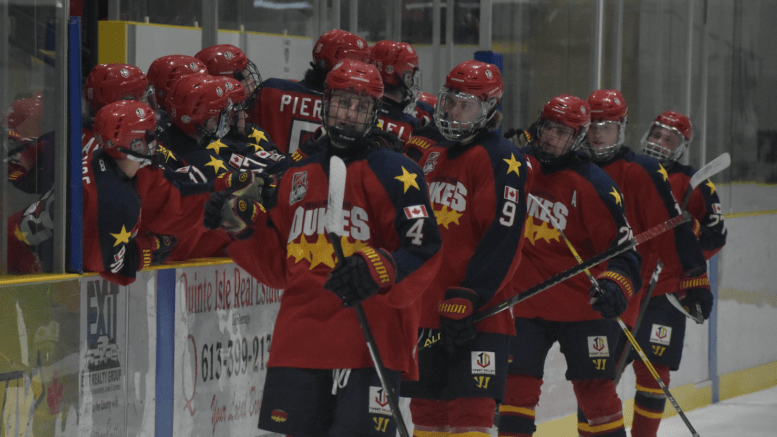 While things didn’t go the way of the hosts on in their final game of the week, there were significant signs of life from the Wellington Dukes in the final days of October.

Wellington was full value in wins over the Toronto Jr. Canadiens Wednesday and the Cobourg Cougars Friday to lift the locals over the .500 mark since Friday, Oct. 8 when they bested Haliburton County at home 5-1.

The Dukes fell back to the even mark on Sunday in a 5-3 loss to Trenton but their coach says the club is starting to figure out what type of team the Wellington entry wants to be.

“It was a big week in terms of effort and putting together 60 minutes of hockey the way we want to play it,” Smith told the Gazette. “The intensity and urgency was there in our games against Toronto and Cobourg and that’s great to see.” 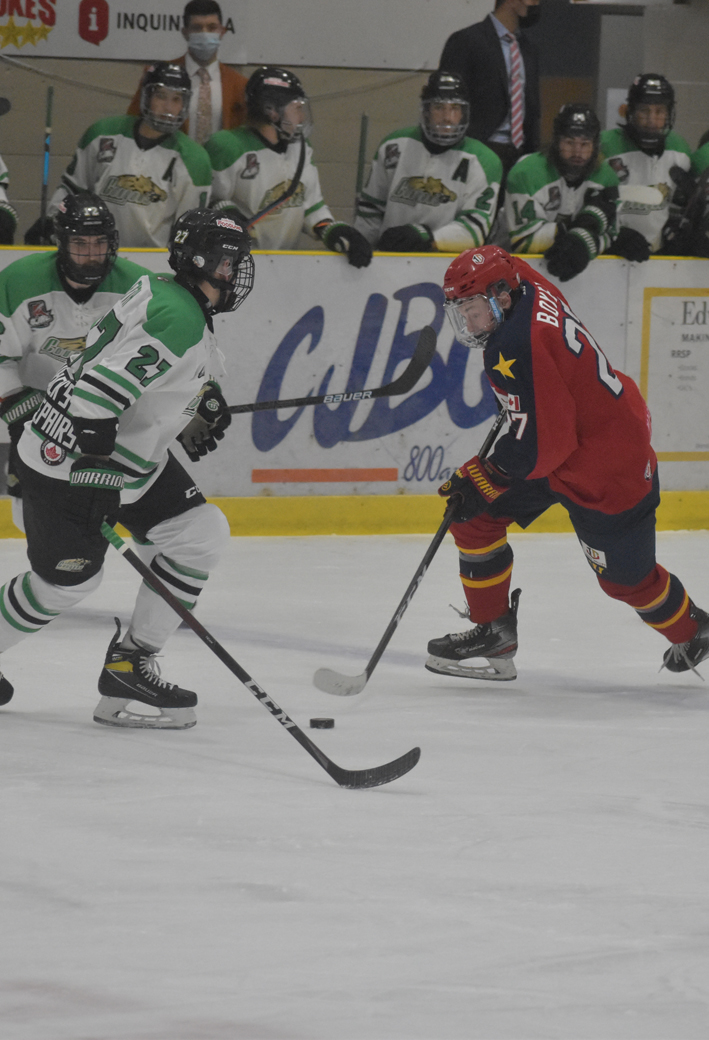 In terms of the contest against the East Division leading Golden Hawks, Smith said the team let their foot off the gas pedal in the second period and it was enough to allow the visitors to pull away.

“That’s a good team with a great record coming into the game and their transition game is hard to contend with if you make mistakes,” Smith said.

Wellington’s most costly mistake came at the midway point of the game Sunday while tied 2-2. After hemming the Golden Hawks in their own end for a lengthy stretch, Emmet Pierce and Aaron Brown played game of ‘I’ll take it-no you’ve got it’ at the Trenton blue line.

Trenton’s Justin Mauro would eventually get it and set up a successful 2-on1 with Jordan Fuller playing the role of triggerman on a snap shot at the lip of the Wellington crease.

Up 3-2, Trenton’s Dalton Bancroft would have the dagger with 1:05 left in the second, taking a wide Robinson Lucas blast off the boards and beating Dukes starter Matt Dunsmoor to the near post for a 4-2 lead heading to the second intermission.

Allowing transition chances was one hole in Welligton’s game at Lehigh on Sunday. Another was special teams. The Golden Hawks buried both their man advantage chances against the OJHL’s least penalized club while the Dukes were a partly 1-for-7 on the power play.

“We need to do a better job go taking care of the puck against great transition teams like Trenton and we need to be way better on special teams. We shut them down on the power play and it’s a completely different game,” Smith said.

Wellington’s Brodie McDougall would get the hosts back to within a goal with his second of the game at the 13:11 mark but Aiden MacIntosh’s empty netter with just over a minute left sealed the scoring at 5-3.

Newcomer David Campbell has a power play goal for the Dukes in the second period.

On Friday, Wellington staked themselves to a 2-0 lead through the opening frame and it was enough to out pace the visiting Cobourg club 5-3.

McDougall and Pierce had goals at the opposite ends of the period but the Cougars came out firing in the second and it was Michael Palandara taking advantage of a slow starting Dukes team 45 seconds into the second.

Wellington would restore the spread with a power play goal at the 3:20 mark.

Up 4-1, the Cougars tried to claw back as Jayden Baldinelli beat Wellington starter Ethan Morrow at 7:22 to get the visitors to within a goal.

But the volleys kept coming and Jacob Vreugdenhil put a nice move on Cobourg’s Carter Tahk with under two minutes left in the second to push the game to 4-2.

Wellington could have had a three goal lead if not for Tahk stonewalling Jaxen Boyer on a penalty shot with 20 seconds left.

In the third, Campbell potted his first as a Duke at 3:23 to make the spread a field goal.

Liam Filip had a response for the Cougars inside the final five minutes to shave it to a two goal lead in favour of Wellington but 5-3 was as close as Cobourg would make it.

After a scoreless first, the Baby Habs broke the ice in the second as Tyler Fukakusa beat Dunsmoor at the 6:52 mark to give Toronto a 1-0 lead.

Later in the period, Barret Joint striped a Jr. Canadien puck carrier and would snipe an unassisted tally with just under four minutes left to square the affair at 1-1.

Partway through the second, the Dukes picked up the winner as Ethan Quick spotted Harrison Ballard at the 10:02 mark to push Wellington ahead for good.

Dunsmoor made 24 stops on the afternoon picking up the win.

The Dukes have a busy weekend ahead, playing the Buzzers at venerable St. Micheal’s Arena tonight before hosting a tough North York Rangers squad on Friday.

On Sunday, Wellington is back in the Big Smoke to tangle with the Junior Canadiens.