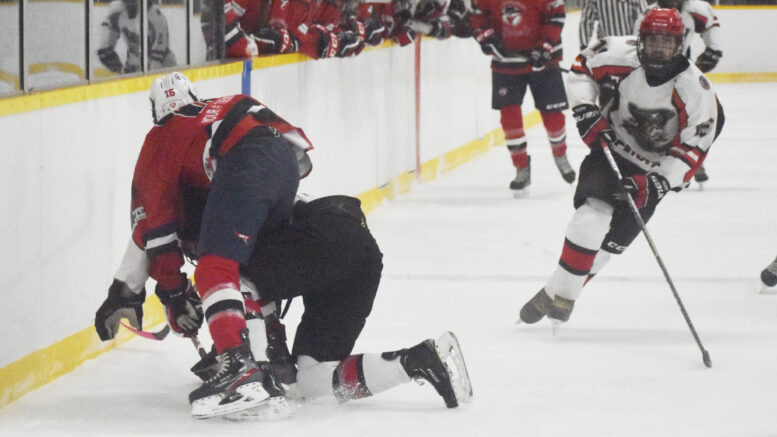 After blowing out the Frankford Huskies at home on Thursday night, the Picton Pirates (7-4-0) needed to work some overtime to keep the first year Tod Division squad winless through 11 games Saturday in the back end of the home-and-home set.

Picton made Thursday night’s affair a laugher by scoring five goals in the first period en route to a 9-3 win at Huff Estates Arena.

But on Saturday, the Pirates found out there was heart in the first year pups as the hosts came back from a 4-1 deficit late in the second period to eventually force overtime.

In the extra session, the ice was tilted in Picton’s favour and the club could’ve won the game several times over before Nick Kirby was sprung for a partial breakaway off a Devin Morrison Passat 4:26 of the extra session.

Kirby, on the hunt for his first goal of the season, put a scorching move on Huskies starter Andrei Ballack, faking forehand, then backhand and then roofing a puck to the blocker side, giving Picton it’s third win in as many games.

“Hopefully it’s a message to our players that you need to be prepared to put forth a 60 minute effort in this league every single night,” Picton coach Kyle Hawkins Schulz said. “You can’t take anything for granted and just because you blow out a team one night, it doesn’t mean the next game is going to follow the same script.”

The locals started off well enough in the first period and despite being tasked with killing off three minors, Picton emerged with a 2-0 lead.

Morrison deposited at Jack Dow feed at 4:09 to break the ice then, at 11:32, Nate Boomhower checked in to pot his fifth of the season.

With Dow again playing the role of set up man, Boomhower drove wide and used his long reach to complete a wrap around effort at 11:32 of the first.

For the Belleville native who missed a portion of the season with a five game suspension, that’s a handful of goals through six games.

“I think are starting to see the Nate Boomhower everyone has been expecting in this Division,” Pirates GM Jason Parks said. “With a headful of steam, there aren’t too many defenders that handle the physical load he brings when he carries the puck to the net.”

In the second, Picton continued to display a nice touch in the offensive zone as Owen Dever snapped a puck past Ballack to the top shelf, busting the Batavia, NY native’s water bottle in the process to make it 3-0.

Frankford would get their first of the game at he 10:17 mark when Kurt Gibbs was able to beat Picton’s Tyler Hayes.

But Picton restored that lead when Dever showed quick hands around the net, slipping home Noah Brant’s rebound for a power play goal at 17:30.

Just a minute later, Brant misfired on a one timer that would have sailed into a mostly vacated net.

“Up 4-1 or even 5-1, it’s a totally different game heading into the third period,” Hawkins Schulz said.

While not much has ever gone right for the Huskies thus far into their first campaign, the final two minutes of the second stanza was a shining moment.

Defenceman Curtis Dicks was able to send a puck past Hayes through a screen at 18:46 on a power play volley.

With the Huskies suddenly on the hunt, the locals gave the home town faithful a jolt just over half a minute later when Dawson Douglas flipped the puck over Hayes at 19:17 to make it a 4-3 game heading into the second intermission.

In the third, the Pirates would out shoot the Huskies 14-5 and came close to sealing the deal but the hosts kept the contest within reach.

Finally, afforded a power play late and with Ballack on the bench, the Huskies howled when Hunter Cooney’s shot barely escaped the pads of Hayes at 17:04 to make it a 4-4 game.

“Our penalty killing was tested early and often and I thought we did a pretty good job until late in the second,” Hawkins Schulz commented.

One of those penalty killers that helped Picton kill off four straight minors with relative ease was Brayden Adams who is seeing some action on the blue line.

The Frankford native almost solved the contest in the final two minutes with a dazzling rush through three Huskies but wound up being denied at the net.

Boomhower had a pair of looks in the overtime including an empty net tap in that went wide just prior to Kirby’s game winner.

Ballack made 35 stops for Frankford and was far better than his previous outing where Picton chased him after giving up four in the first 8:24 of Thursday’s game.

Dever would show provide a good indication this was going to he his team’s night when he, Brant and Landon McLellan converted on a scoring rush ten seconds into the game.

Gibbs had a response for Frankford at 7:57, beating Pirates starter Nolan Lane but a Boomhower tally less than 30 seconds later would wind up as the eventual game winning goal.

Frankford’s Phoenix Smith had a nice high slot tip in for the Huskies at 13:33 but the Pirates had the last laugh in the period as Adams potted a power play goal at the 14:27 mark of the first.

Picton owned the second as Brant converted on a one timer 59 seconds into the period.

Dever capped off his hat trick effort at 16:04 and that tally saw Picton’s Trot Davis pick up his first point on the season.

The Belleville native has been Picton’s most consistent performer on the blue line this season and his point total isn’t nearly indicative to his contribution to the club.

“With Trot, you are always going to get smart decisions with the puck, good gap control and consistency,” Parks noted. He may not land on the score sheet too often but he’s bringing a complete game every night.”

Overager Dever continued his hot streak and has eight goals in his last three contests.

Morrison’s fourth of the season at 17:09 closed out the scoring in the second and was set up by blue liner Aidan MacDonnell who had his second helper of the frame.

In the third, the Husky John Hearns would bulge the swing at 9:19 with a power play goal to make it 8-2 but the Pirates and Picton native Ian Harrison would put the cherry on top with a nice short handed effort past Frankford reliever Hayden Candler at 16:12.

For Harrison, it was his first junior goal of his career.

“Ian has worked hard this season doing a little bit of everything including playing with an edge and laying some big hits,” Hawkins Schulz said. “It was great to see him get rewarded.”

Lane made 30 stops in picking up the win.

Picton again looks for a home -and-home sweep this weekend when they meet up with the Port Hope Panthers.