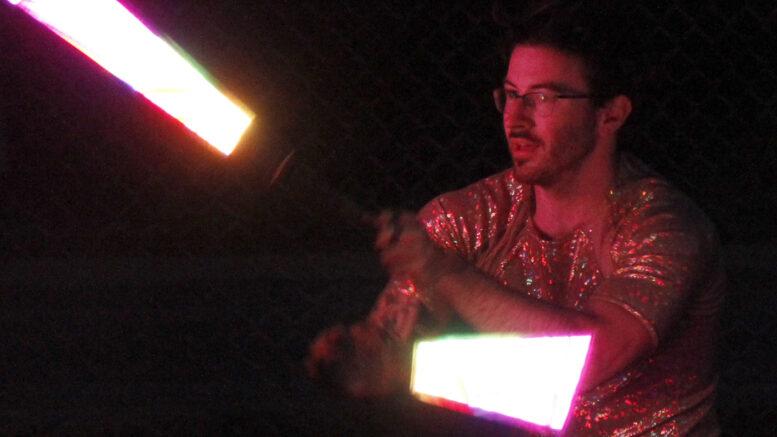 The Picton Fair Grounds was a light show over the weekend at the Department of Illumination’s 9th annual Fire Light Lantern Festival with the theme ‘Vacationland’.

This year’s festival brought the most fair weather in the history of the festival with a sold out event of 617 people.

A little different then the usual festival with no parade and no physical workshops that took place, the festival still went on. The Department of Illumination handed out free lantern making kits in early October that people could take home and create on their own, with the result being a 90 lantern installation in the window of Books & Company which is called ‘Tiny Town Aglow’.

“A lot of the normal lantern festival really happens in the workshops leading up to the event which we were not able to do,” said Krista Dalby, Artistic Director of the Department of Illumination. “So instead we gave out free lantern making kits and we have a beautiful display with 90 lanterns in the window of Books & Company. so I was really happy people really embraced that idea and really got behind it and we made such a beautiful community display of everybody from little kids to professionals artists who choose our community, its the whole range of people represented there, so that was a really nice way of being able to keep up the lantern making traditional and hopefully next year we will be back to do workshops and our lantern parade!”

As said on the Department of Illumination’s website, the Firelight Lantern Festival draws inspiration from traditions of many lantern festivals throughout the world which use light as a symbol to bring people together.

The timing of the festival in mid-November coincides with the European tradition of Martinmas which originated in France in honour of St. Martin, a friend of children and patron of the poor.

As fall ends and the darkness of winter descends upon us it is easy to feel isolated, especially living in a rural community, and especially living in a pandemic. The Department of Illumination’s festival acts as a beacon to encourage residents, both adults and children, to conjure their own light, bringing it into their hearts and homes to sustain them through the darkness.

“Thankfully we have an extremely beautiful night to be outdoors,” Dalby expressed to The Gazette. “After nine-years of doing this event this is definitely the warmest its ever been so were really lucky and were so thrilled by the turnout, we are sold out tonight and we’re really excited to welcome everybody. We had to also re-invent our events again, so very happy that people have just embraced this years event.”

The next Fire Light Lantern Festival is already set for November 5, 2022.

For more information on the Department of Illumination and their upcoming events please visit https://www.deptofillumination.org/