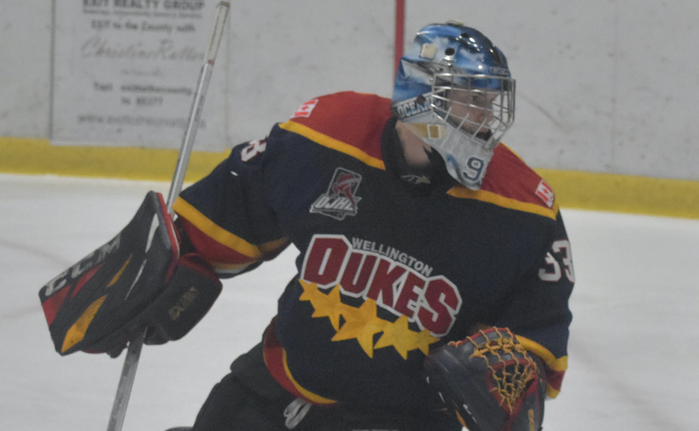 NO LOOKING BACK Wellington’s Matt Dunsmoor post his first shutout of the season on Friday in a 1-0 Dukes win over North York. (Jason Parks/Gazette Staff)

It was another one of those glass half empty or half full weekends for the Wellington Dukes. The club’s attention to detail in general and defensive responsibility in particular is a positive sign.

If the club could continue to hold the opposition to a 2.66 goals against average the rest of the way in the 2021-22 Ontario Junior Hockey League season, the team’s fortunes should be brighter than their 7-7-2 record might foretell.

On the other hand, the offense hasn’t quite matched the ramp up of the defence and the club only managed seven lamp lighters through 181 minutes of hockey over the weekend. A win, a loss and a regulation tie isn’t disastrous for Wellington’s overall fortunes by any stretch of the imagination.

But the rubber is going to have to hit the road at some point isn’t it?

On Thursday at St. Mike’s, Wellington was able to scrounge an extra point in a 5-4 setback to the Buzzers. Down a goal with less than two minutes left, Dukes Coach Derek Smith lifted starter Matt Dunsmoor and that gambit worked as newcomer Graham Dickerson beat Buzzer goaltender Cole Moore with 1:12 left to draw the game event at 4-4. Early in the extra session, the Buzzers came through to recapture the lead for good as Bryce Sutherland had the game winner at 59 seconds over overtime.

Wellington ended the first period well, eclipsing an early St. Mike’s lead when Harrison Ballard converted a David Campbell pass at 14:53 for a power play goal and then forging ahead at 17:20 when Ethan Quick set up newly acquired blueliner Jack Wolder.

But in the second, the Buzzers were their namesake and struck for three goals to Wellington’s one. Giacomo Martino tiled the game at 5:10 and then Riley Sutherland bulged the twine on a St. Mike’s first powerplay of game just 1:05 later. Ballard bagged his second of the game at the 7:43 mark to tie it 3-3 but the hometown Buzzers pushed back in front on their second and final man advantage at 16:55.

On Friday, Wellington only needed one goal in a glittering defensive effort that saw the Dukes and Dunsmoor pick up the first shutout of the season. Brodie MacDougall tipped a Jonathan Balah point blast on the powerplay at 8:17 of the opening frame and that’s all the Dukes needed or managed in a 1-0 blanking of the North York Rangers. Dunsmoor made 23 saves in the win.

On Saturday night at the Scotiabank Pond in Toronto, Wellington got a late start and were never able to crawl even with the host Toronto Jr. Canadiens. Just half a minute into the game, the hosts would lead as Hayden Heinrich would beat Dunsmoor for an early 1-0 lead. Eric Vitale would double the Toronto lead at 15:58 of the first. After no one was able to score in the second, the Dukes fell behind by a field goal at the 3:35 mark of the third when Vitale scored his second of the game. Wellington finally came alive after the Jr. Canadiens had done their damage. Barret Joynt would get the Dukes on the board with thanks to Ballard and Alex Case at 5:39. Ballard’s third of the weekend at 9:51 made it a 3-2 deficit. Selby Warren was solid in the Toronto net down the stretch and made 31 stops to preseve the win.

Wellington travels to Trenton on Friday before hosting Cobourg on Sunday afternoon at 2:30 p.m.