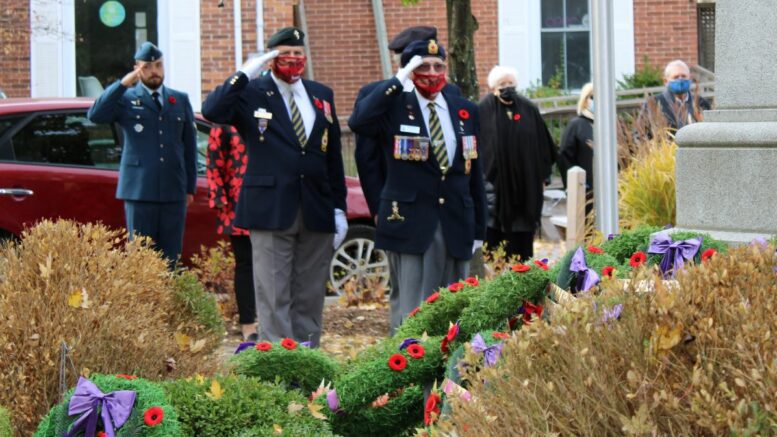 TRIBUTE-A number of veterans paid tribute to those who served. (Sarah Williams/Gazette Staff)

Over 100 people gathered around the Picton Cenotaph in remembrance, their heads bowed in silence between the last post and reveille. Unlike other years, this day of remembrance came unadorned, without parade, pipe band or church service. Like many other events during the pandemic, it was a pared down occasion.

Diane Kennedy, President of Branch 78 of the Royal Canadian Legion took a few moments to speak to the Gazette before addressing the crowd.

Kennedy explained that last year was simple, due to Covid-19. This year, they had planned to have fewer people, but with restrictions easing a week beforehand, that became impossible.

“Last year, we didn’t want any spectators. We just laid wreaths. This year we’d planned the same, only Ontaro opened a week before this ceremony so we’re kind of going by the seat of our pants,” she quipped. “Hopefully there won’t be a huge crowd because our main concern- apart from paying tribute-is keeping everyone safe.” 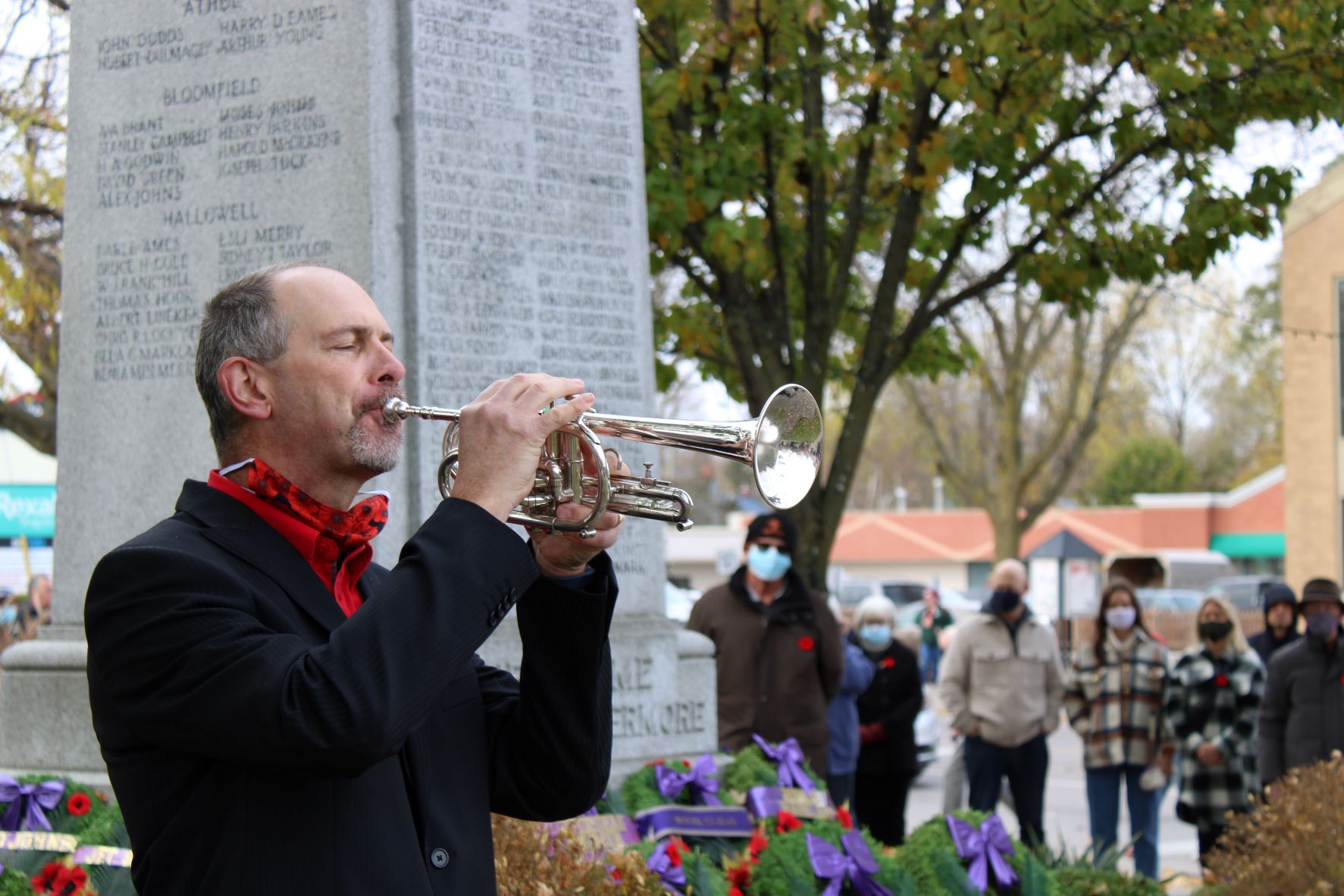 A SOMBRE REMINDER-Kevin Gannon Plays the last post before the crowd stood for two mintues of silence. (Sarah Williams/Gazette Staff)

In attendance were the Ontario Provincial Police, Heather Williams representing local Bay of Quinte MP Ryan Williams, Adam Bramburger on Behalf of local MPP Todd Smith, Councillors Kate MacNaughton and Phil St-Jean along with a crowd of those gathered to pay tribute.

Kennedy mused that, although the pandemic is not exactly a war, it should be fought like one. In other words, people should come together for the greater good, regardless of politics.

She was careful to note, in such a time of such apparent divisiveness, it’s important to remember the divides seen before and the resultant wars, lest history repeat itself.

“We’re here to remember. With so many things happening today, it’s easy to forget history will repeat itself,” said Kennedy.

With war having touched most families throughout the last century, in one way or another, there were several local residents who had their own personal stories for visiting the cenotaph that day.

Kendall Markland is one such resident. She visits the cenotaph every Remembrance Day to lay a wreath for her grandfather, Howard Markland.

Councillor Kate MacNaughton said visiting the cenotaph on Remembrance Day reminds her of the importance of peace and, reading the names etched in stone, is testament to the children torn away from mothers too soon or fathers torn away from families prematurely.

“I stand and think about the mothers, the children…all our families touched by war in some way,” she said. “I think of how important peace is and how its something we should always strive for and hopefully never have to fight for.”

MacNaughton also has familial ties to the wars of the last century. She noted that, though many soldiers who are revered are those who either survived or died overseas, there is not historically enough attention paid to those who suffered, and sometimes paid the ultimate price, due to PTSD as a result of war.

“In my family, I think about my great great uncle, my grandpa’s favourite uncle who died immediately after the war due to PTSD,” said MacNaughton. “That kills me…he jumped to his death at the Royal Victoria Hospital due to shell shock. We don’t celebrate those deaths. Their names aren’t on cenotaphs.”

After the ceremony, but before the crowd had dispersed, a Hercules Aircraft flew low over the Cenotaph, reminding those below war is never far away if we don’t safeguard the peaceful society so many lost their lives to protect.