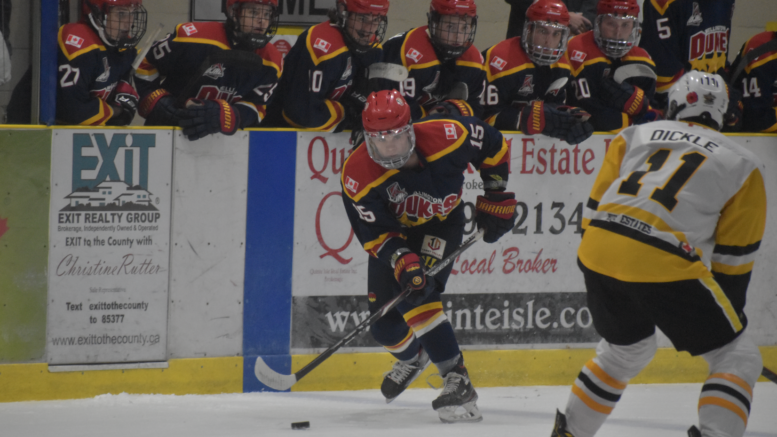 After displaying a knack for defensive hockey, the Wellington Dukes opened up the offence this weekend and picked up four of a possible six points including a Friday night dismantling of the host Trenton Golden Hawks.

Whether the Dukes can regain that penchant for being on the right side of the puck in addition to finding the net early and often remains to be seen. But make no mistake, there was significant joy in Duke land this week.

Take away a few glaring errors and poor puck management in Sunday’s 7-6 setback to the visiting Cobourg Cougars, Wellington looked every part of…well, the Wellington Dukes most hockey fans in these parts expect.

“We had an emotional win on Friday night and we hoped that would continue right on through the weekend and for the most part it did,” Dukes Head Coach Derek Smith told the Gazette Tuesday. “We played about seven and half of nine period this weekend and if we could have shown a little more urgency out of the gate on Sunday, we would have had all six points.” 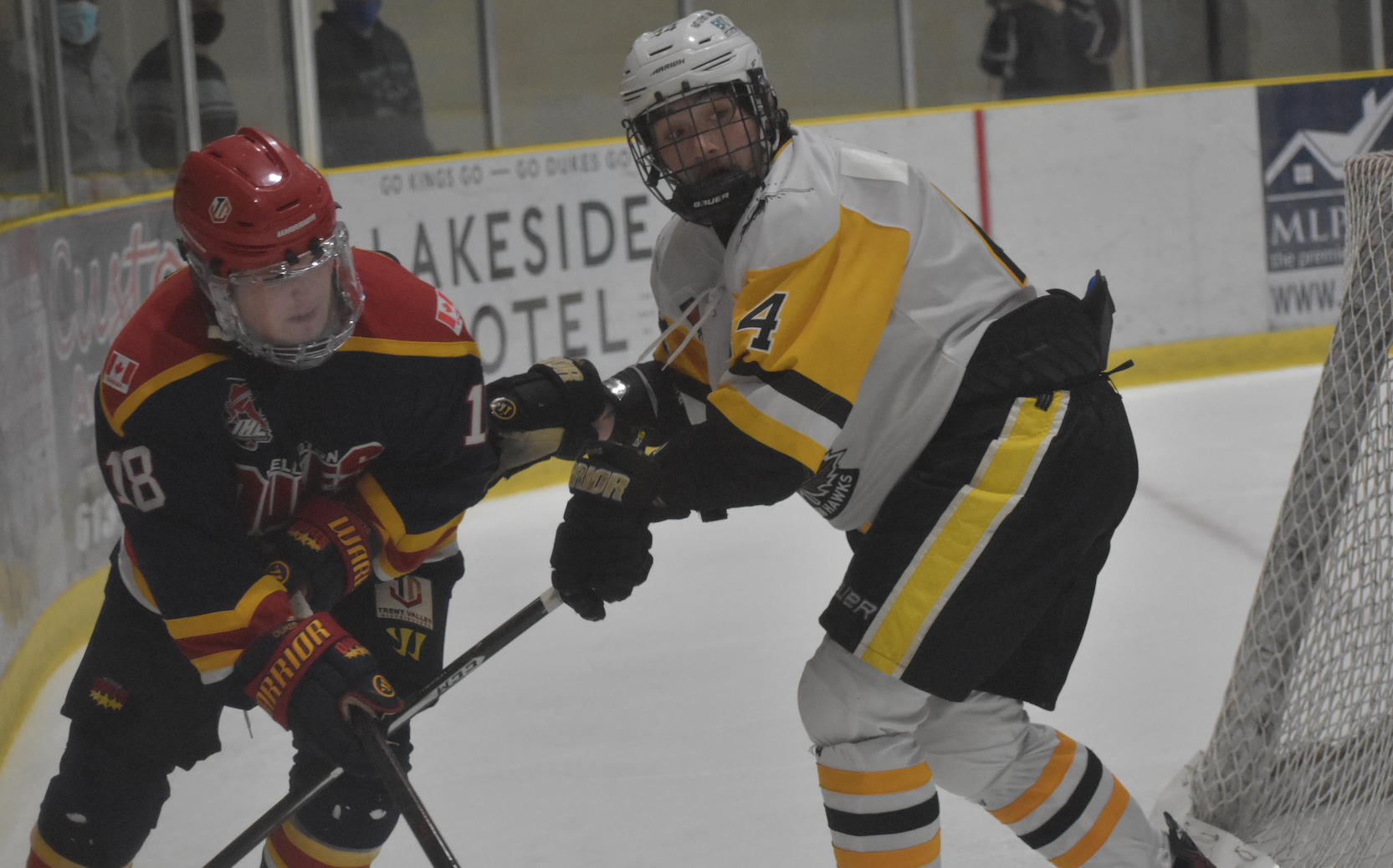 Wellington’s Ethan Quick had a goal in each of Wellington’s three games this weekend. (Jason Parks/Gazette Staff)

On Monday in Cobourg for the back end of the home and home set with the Cats, Wellington was late to the starting gate in their second straight game as the hosts built a 3-0 lead through the opening 20 minutes.

Not wanting to chase the game over the final 40 minutes, the Dukes responded early in the second and just kept pouring the goals into the Cobourg net en route to a 7-3 final.

Wellington’s Barret Joynt registered his ninth of the campaign at 2:10 and the Quinte AAA grad Corbin Roach converted his first and second goals of the season at the 9:12 and 15:49 marks of the second.

Tied at 3-3, Graham Dickerson, who set up both Roach goals, had a power play dagger with 11 seconds left in the middle stanza to push Wellington ahead for the first time in the game.

In earlier contests this season, Wellington might have had an emotional let down in the third period but solid net minding and good checking made sure the Cougars wouldn’t square the affair in the opening ten minutes.

midway through the frame, it was Wellington’s kiddie corps chasing in the insurance with 16-year-olds Will Mitchell and Ethan Quick making it a 6-4 Dukes lead in a 1:21 span.

Cobourg’s freshman bench boss Wes Wolfe went for an early pull of net minder Mason Vaccari but the gambit backfired as Joynt sent his second of the game into a yawning cage at 15:33 to make it a 7-3 final.

On Sunday, a few major miffs were Wellington’s undoing as the Cougars built a 5-0 lead through just 20 minutes of play.

Smith said in his view, despite the score, the period wasn’t a bad one for Wellington.

“We just had three or four really bad choices with the puck that can’t happen at this level,” the coach noted.

Five different Cougars found the mesh behind Wellington starter Ethan Morrow in the frame as Dunsmoor would relieve the Kingstonian to start the second.

A more determined Wellington squad took the ice in the second and carved into the Cougar lead.

Emmet Pierce would score on the power play at 1:31 and then Jacob Vreugdenhil potted a short handed marker at the 7:13 mark.

Jacob Gilbert would help reestablish a three goal spread for Cobourg at 18:33 but the Wellington comeback bid got a shot in the arm when Roach found Joynt with under 90 seconds left in the frame to get the Dukes back to within a goal.

Wellington kept knocking at the Cobourg door and  Vreugdenhil was able to pound him his second of the contest at 8:07 of the third.

The Dukes comeback was actually completed inside the final ten minutes of the game when Joynt took a Roach pass and beat Vaccari at 9:40 of the third.

Unfortunately for the hometown faithful at Lehigh, a massive comeback from 5-0 down ended on a sour note as Tai York, who opened the scoring for Cobourg at 2:16 of the first, closed it with the game winning goal at 17:18 of the third.

Going into Trenton on Friday night Wellington was going to need a big effort from Matt Dunsmoor and got it as the Bracebridge native stopped 50 Golden Hawks volleys en route to a 6-3 Dukes win.

Down 2-0 early, Wellington would score late in the first as David Campbell busted in alone and slipped a backhander past Ethan Taylor with just over a minute left on the clock.

By the last minute of the second, Wellington had closed the gap and taken a two goal lead for the first time against the Golden Hawks this season.

Trenton native Ethan Quick was cruising through the slot and picked up a blocked Harrison Ballard volley and beat Taylor to the short side at the 2:22 mark.

Afforded a power play with less than five minutes to go in the second, Brodie McDougall showed a deft touch in the slot, tucking home a rebound at 15:18/

Ballard would get a goal with 52 seconds left to make sure Wellington had insurance in the third as he was benefactor of a beautiful Joynt pass from the corner to make it 4-2 Dukes.

McDougall would bag his second of the game in the slot are with less than five to play.

The goal was more than just window dressing on a dominant night by Dunsmoor and the Dukes however as Aaron Jamieson struck for a 6 on 4  power play goal at the 18:45 mark.

The Dukes’ David Campbell would salt this one away late however as his empty netter made it a 6-3 final for the visitors.

In total, Wellington would score 19 goals on the weekend and Smith admitted it was nice to see the offence bust out.

“If you told us we would score 19 goals in three games, I would have assumed we would have won all three games,” Smith said, adding he hoped this was a turning point in Wellington’s up-and-down season thus far.

“We’ve dealt with adversity and injuries and our success is going to come from playing games with some urgency, consistency and being honest. I think we are now trending in the right direction,” the coach added.

Wellington will enjoy some home cooking this week as they welcome the Toronto Patriots on Friday evening and the Lindsay Muskies on Sunday afternoon.