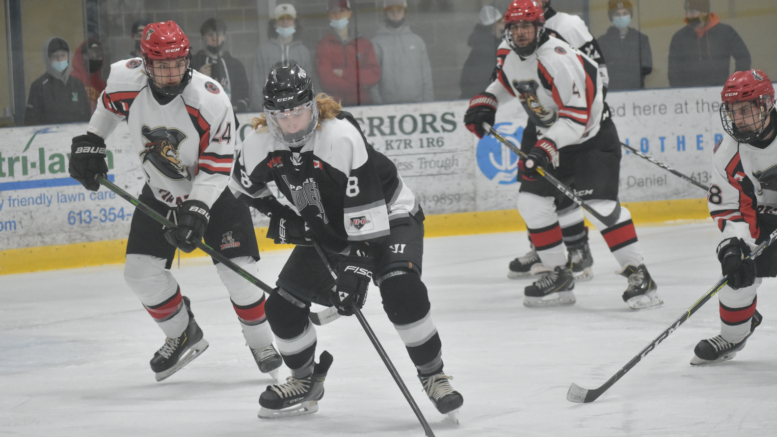 It was a feast and famine weekend for the Picton Pirates who busted a two game slump at home Thursday with a dominating win over the visiting Campbellford Rebels but couldn’t muster a goal the following night in Napanee.

The locals took a 9-0 margin into the final minute of play en route to their most decisive win of the season over the Rebels.

But Picton would have served well to save some of that firepower the following night in Napanee where Raider’s net minder Bailey Maracle pitched his first goose egg of the year.

“It’s always going to be  difficult to get into a rout one night and then head into Napanee the following night,” Pirates General Manager Jason Parks said. “You would hope with a veteran club bad habits wouldn’t creep into our game but there was that and some indifferent play that really gave us no opportunity on Friday night.”

Picton’s Nolan Lane got the nod on Friday at the Strathcona Paper Centre and did well to keep the contest competitive.

The Wellington native could hardly be faulted in the first on Napanee’s two tallies.

At the 8:00 mark, Noah Westwater picked the far corner when Picton’s defence failed to clear the front of the net and Lane was stuck looking at the backside of no less than four skaters.

At 15:42, Connor Brook’s drive was looking to go well wide of the Picton net when Beckett Palmer-Stephen’s deft tip at the side of the net put the puck into the top of the Picton goal.

In the second, Palmer-Stephen was at it again, blasting a one timer from the slot past Lane just 1:32 in and essentially taking Picton out of the game. Matt Sheehy would add a pair for Napanee while Ben Chubbs tallied a single in the third, taking the puck to the net along the goal line with ease and beating Lane high.

About the only bright spot for Picton was a spirited dust up where Hunter Matthysse got the better of Napanee combatant Reid Lambert.

The Pirates pressed late trying to upend Maracle but the net minder made some of his nicest saves on Picton’s 34 shots in the very late going when the game was decided long before.

A night earlier, Picton had little trouble finding the back of the net.

Picton had five different scorers as they amassed a 5-0 lead through the opening frame.

For Stevenson, a goal and an assist was a great sign the 17-year-old Trenton product was back in fine form after a fracture kept him on the sidelines for three weeks.

“Stevie is quickly emerging as one of the brightest 2004-born rookies in the division,” Parks said. “He was very much missed last weekend and it’s wonderful to be able to have his presence in our lineup again.”

Picton would add a goal in the second as Owen Dever collected a quick Brant pass and went top bunk on Cameron Hansen at the 8:06 mark.

Picton picked up the pace early in the third when Boomhower potted his second of the game at 2:05.

Later, Landon McLellan and Nolan Dawson would score to make it 9-0.

Picton seemed headed to a blanking of the Rebels but Adam Klaas would fire home his team’s first goal of the game with 52 seconds left, denying the Pirates’ Tyler Hayes his first junior shut out.

If Picton (8-7-0) has any thoughts of staying within shouting distance of first place in the Tod, the club will need to have a far better effort on Thursday when they host Napanee .

Picton will then be Amherstview on Sunday to take on the Jets where the hosts shaded the Raiders 4-3 on Sunday night.

“With a shortened season, it’s time for the veterans to step up and lead,” Parks said. “Right now, the younger players are outperforming guys two and three years older on a consistent basis and while the development is a positive trend, this team need to start producing results against Napanee and Amherstview.”