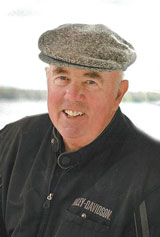 Peacefully entered into rest at Prince Edward County Memorial Hospital, Picton on Saturday, November 20, 2021, Jerry Ryan of Picton died at the age of 71.  He was the son of the late William Leo & Ella RoseMary Ryan (nee Helferty) and cherished husband for 49 years to Pat (nee Ward).  Jerry was the loved father of Teresa Brown of Stirling and he was proud to be called Poppa Jerry by his only grandchild Drake.  He was the brother of Larry (Barb) of Hamilton, Jean Laird (Harold) of Bowmanville, Kevin of Whitby, RoseMary Bedard (Pierre) of Picton and the late Maureen Rogers.  Jerry will be fondly remembered by his many nieces and nephews.  Mr. Ryan rested at the Rushnell Funeral Home – Picton Chapel, 33 Main Street West, Picton (613-476-2450).  Funeral Mass will be celebrated by Rev. Father George Okoye and Deacon Bill Gervais at St. Gregory the Great Catholic Church, Picton on Thursday, November 25, 2021 at 11 a.m. with visitation for 1 hour prior to the service.  Inurnment & Rite of Committal with Prayers Mt. Olivet Cemetery.  ***Proof of double vaccination and photo ID required at the Church and the Elk’s Hall.***  If desired, donations to Parkinson Canada or the Heart & Stroke Foundation would be appreciated by the family.  Online condolences can be left at: www.rushnellfamilyservices.com