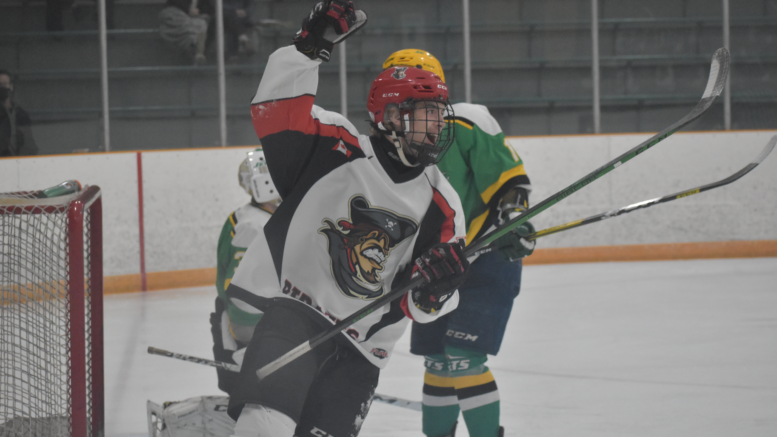 The Picton Pirates put on their work boots and hard hats, put forth 120 minutes plus of inspired hockey and took three out of four points against the Tod Division’s best two clubs this weekend.

With Sunday’s 3-2 win in Amherstview, the Pirates moved back into third place in the division, a point clear of Port Hope who are entertaining Campbellford Monday evening.

At 9-7-1, Picton may be back in fourth spot by the time they return to the ice one Saturday night in Campbellford to face the Rebels however the club proved to themselves and anyone else watching they too can be included in the discussion when of who will take the top of the Tod in 2021-22

General Manager Jason Parks praised the efforts of the club and the coaching staff for rebounding so well after an uninspired 6-0 loss Friday, Nov. 19.

“We went from a pretty dark place to putting it all together for two really big games for this organization,” Parks said. “My hat is off to Coach Kyle Hawkins Schulz for getting the game plan together and to the veterans on this team for accepting the challenge, buying in and coming through with a complete effort from the puck drop on Thursday to the final buzzer on Sunday.”

Picton was stingy defensively and got remarkable efforts out of Tyler Hayes on Thursday at home and Nolan Lane on Sunday on the road. 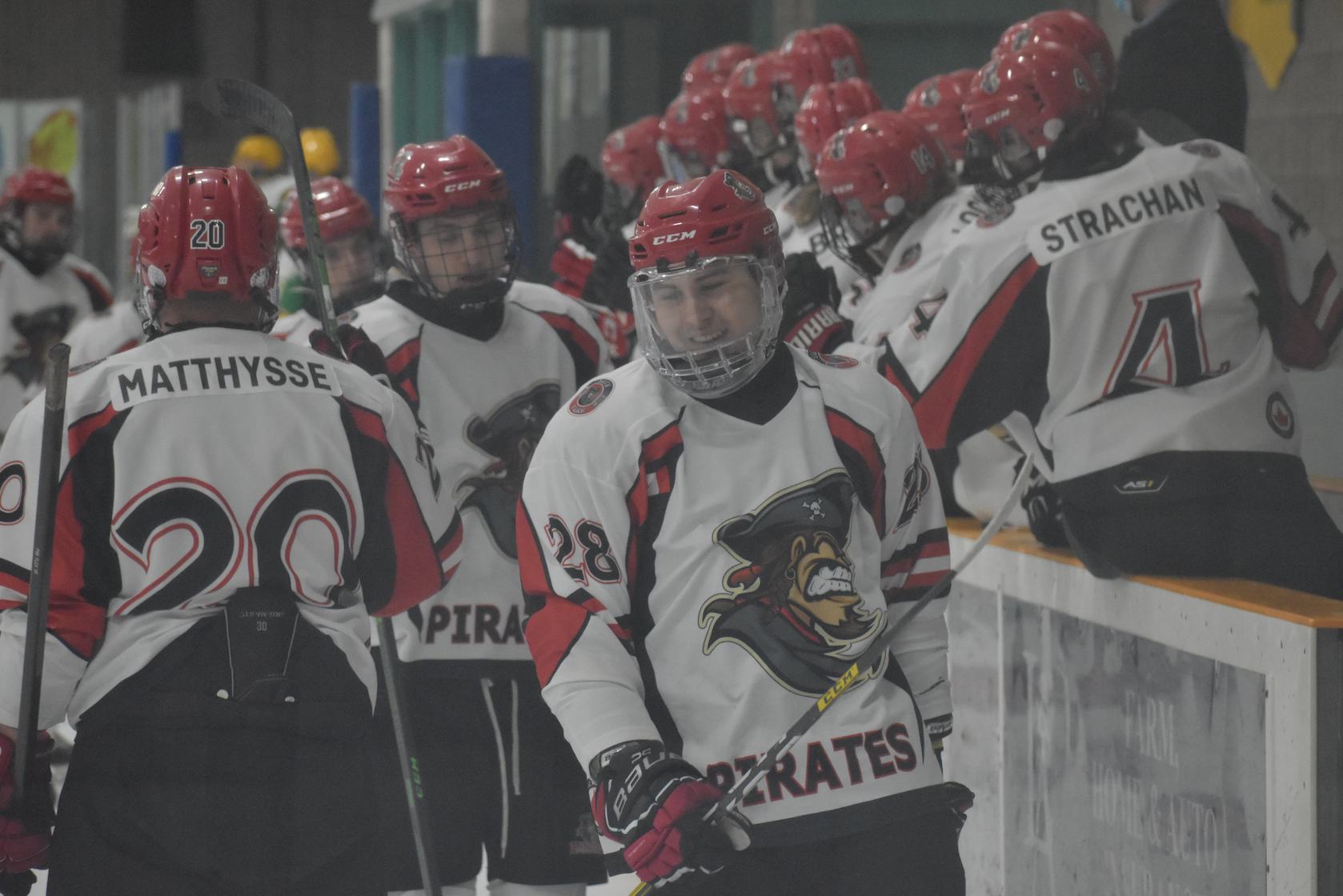 Hayes had 34 stops against Napanee including seven in the seven minute overtime where he stared down a number of Raiders who were hungry to cap off a comeback.

On Sunday, Hawkins Schulz gave Lane the start and the 17-year-old didn’t disappoint, particularly in the third when the Jets put 23 pucks on net in an attempt to force overtime.

“That’s the kind of goaltending it’s going to take to win in this league on a consistent basis,” Hawkins Schulz added. “Both Tyler and Nolan came up big for us this weekend.”

Up 3-1 heading into the third period, Picton was in a bend-don’t-break mode and had to navigate a few minor penalties.

The Picton power play, which clicked for three goals this weekend including a go ahead goal in the second, nearly put the game to bed in early part of the third with a number of chances in tight on Jets net minder Jeremy Piazzi.

But a bad break at the line sent the Jets in two-on-one and Mathieu Hallé was able to keep the puck and find a hole behind Lane 3:16 into the third.

Picton would take four minors in the third period and the Jets were buzzing the Picton net like mosquitos for most of the stanza but Lane stood tall for his team, en route to an epic 49 save performance.

During a late 6-on-4 sequence, Pirates captain Devin Morrison came up with a huge shot block that drew a big response from the Picton bench.

Picton was down 1-0 in the first when Morrison had a nice outlet pass to Nate Boomhower who made a nice move to enter the Jets zone.

The veteran spotted a streaking Jack Dow at the side of the net and after a nice feed to the Wallbridge native for his seventh goal of the campaign at the 9:11 mark.

Picton pushed ahead in the second with a point blast off the stick of Noah Brant at 4:45 of the period. Boomhower picked up an assist on the power play tally that was Brant’s ninth of the season.

That man advantage went straight to Picton’s legs and the Pirates were active on the forecheck.

On the very next shift, Cole Stevenson’s pass to the crease found the stick of Reese Hancock and the Shannonville native had a tap in at 5:28 to put Picton ahead 3-1 and Picton had more than a couple of length shifts in the Amherstview zone, leaving the Jets jammed up and visibly frustrated. 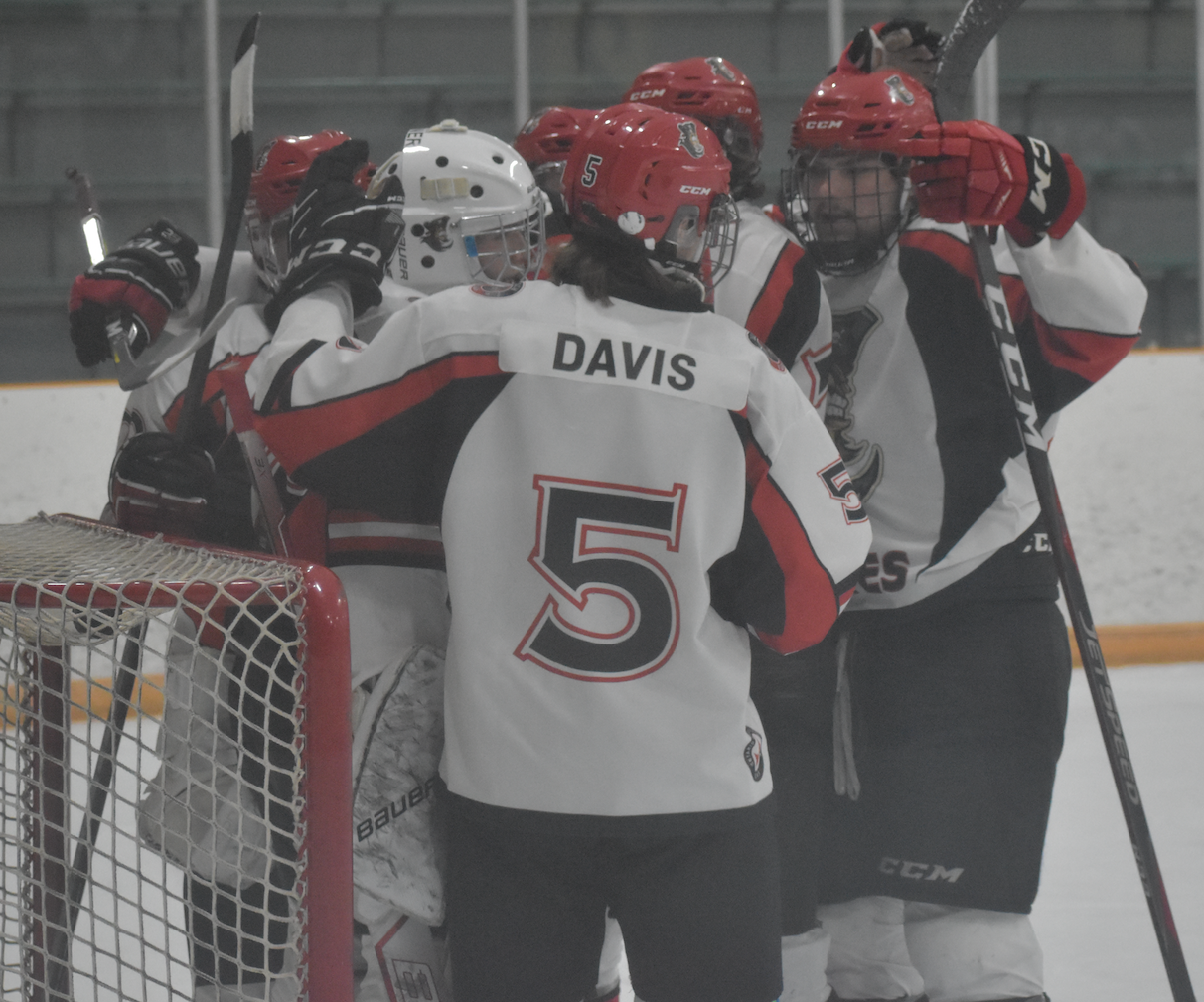 Picton netminder Nolan Lane is mobbed after his 49 save effort allowed the Pirates to escape with a 3-2 win Sunday. (Gazette Staff)

“We were really heavy on the forecheck and it might have been our best period of the year in those terms,” the coach added.

On Thursday night, it was scoreless through the midway point of the game until Owen Dever pounced on a loose puck in the high slot and beat Napanee starter Bailey Maracle to the top corner on the powerplay at 9:23.

Napanee would tie it in the third when a rare defensive break down in the Pirates end led to Connor Brooks lurking in from the point and scoring his first in the PJHL at 3:50.

Picton didn’t have time to dwell on the setback however as they were afforded a power play and Morrison would spot Brant at the blue line as the Tyendinaga native made no mistake, picking the corner with a bullet at 5:25 to put Picton back in front.

Napanee would get back on even footing at 16:16 of the third when Logan White’s shot hit iron behind Hayes. While some Pirates fervently disputed the puck went in, a goal was rightly called and the score was 2-2 heading to a seven minute overtime.

In a wild extra session with the ice chewed up to pond hockey standards, both teams had glorious chances of snagging an extra point.

Hayes was heroic in his efforts while Maracle was just as good in the Raiders net. Stevenson and Ian Harrison had chances to win the game and couldn’t bulge twine while Napanee would bat a puck in behind Hayes albeit with a clear high stick that official Steven O’Reilly correctly washed out.

Picton is off this week as the Wellington Dukes play a rare Thursday night game at home.

“Wellington reached out to us in the summer and mentioned they had two Thursday night games and we’ve accommodated them. Obviously junior hockey fans in Prince Edward County share allegiances between the two levels and we didn’t want them to have to make a tough decision so we have booked a practice that night and on Thursday, Jan. 27,” Parks noted.

Picton returns to Huff Estates Arena on Thurs. Dec 9 when they host Frankford