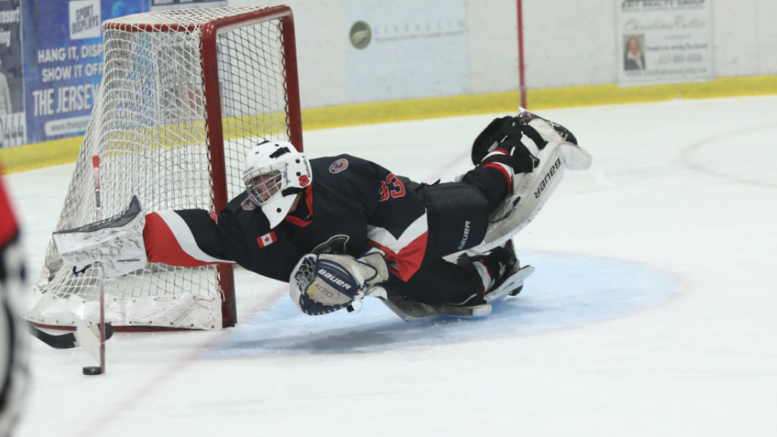 Picton's Nolan Lane lays out to cover a puck. The 17-year-old netminder made the PJHL prospects event next month in Orillia. (Shawna Adams for the Gazette.)

A pair of Picton Pirates will be representing the organization Dec. 11 at the 2021 Provincial Junior Hockey League Prospects Event in Orillia.

The timing of the announcement couldn’t be any sweeter for Cole Stevenson and Nolan Lane as both players  factored into Picton’s three point weekend against Tod division leading Napanee and second place Amherstview.

In his best junior outing to date, Lane, a 17-year-old Wellington native, made 49 stops in a 3-2 win over Amherstview on Sunday night.

Meanwhile, Stevenson, a fellow 17-year-old rookie from Quinte West set up the game winning goal in the second period Sunday and has three points in four games after missing three weeks due to a hairline fracture in his wrist.

The PJHL’s Eastern Conference (Tod and Orr divisions) will take on the top 20 2005 and 2004 birth year players from the Carruthers and Pollock divisions at the West Orillia Sports Complex, home of the PJHL’s Terriers. 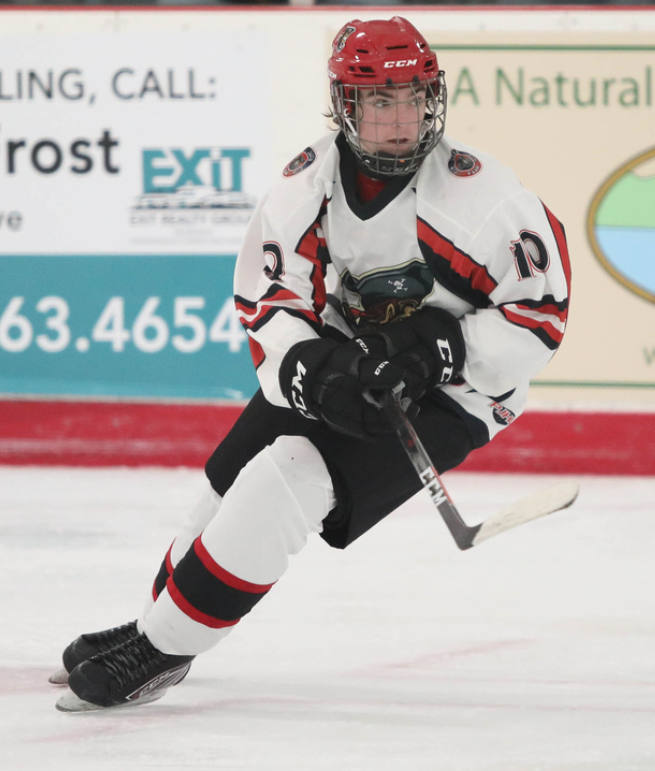 Due to the COVID-19 pandemic, the PJHL has chosen to break up the annual showcase event. The following week on Dec. 18, the best prospects from the West and the South Conferences will face off in Norwich, ON.

“The Prospect Games are important because it helps our league showcase the top 16 and 17-year-old players in our league,” said PJHL Commissioner Terry Whiteside. “These players are looking for opportunities to move to the next level of hockey and the PJHL wants to help facilitate that development for this part of our league.  We will be inviting scouts from the GOJHL and OJHL to attend these games and look for their next player.”

That was music to the ears of Pirates General Manager Jason Parks who said he was elated to see two of Picton’s young stars be recognized in such a way.

“These guys are hungry to forge their own path in junior hockey and it’s nice to see them have this type of opportunity,” the GM said. “They work extremely hard and the desire of making the next level goes into every decision they make, game day and otherwise.”

A Quinte West Golden Hawks grad, Stevenson has three goals and three assists in ten games so far this season and while his offence has been valued, his two way play has led Picton’s Coach Kyle Hawkins Schulz to trust the rookie with important minutes including penalty kill assignments.

A natural centre, Stevenson has had to learn to play right wing this season as the lack of right handed shooters have left the staff looking for solutions along the right wall.

“He is an amazing two-way player at this age and the sky is the limit in terms of his development,” Parks added. “I know this team is extremely happy he committed to us and, given how other staff in the Tod Division are taking note and what they are saying about him, I’m sure Stevie is pretty happy he’s on board with the Pirates.”

For Lane, his pathway to junior hockey might have been far different had he plied his trade elsewhere.

A 5-2-0 record with a 3.28 Goals Against Average and .903 save percentage through his first seven games, the Prince Edward County Minor Hockey Association grad has proven what many observers around the local rinks believed when watching him come up through the minor hockey ranks. Lane has AAA skill when it comes to stopping pucks and might have cracked that level had he been living somewhere else in Ontario.

“I don’t think there’s anybody more dedicated to his pathway than Nolan. Sunday’s 49 save performance in Amherstview was just another contribution to his body of work at the PJHL level that improves and grows with each outing,” Parks added. “Being a 17-year-old goalie in this league isn’t easy at the best of times but we are so excited for Nolan and what lays ahead in his future.”