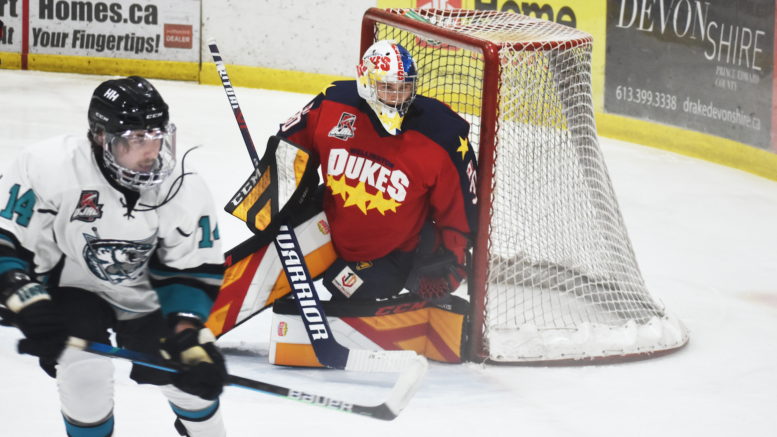 The Wellington Dukes beat a well worn path to the offensive well this weekend as the club took four of six points. Holding down third spot in the East Division, Wellington (14-10-2) was able to extend their lead over fourth place Lindsay by virtue of a 7-4 win over Muskies at home on Sunday.

Less than 24 hours prior, Wellington ripped the lid off the Westwood Arena in an 8-0 whitewash of the host Toronto Patriots.

Those back-to-back wins salvaged the weekend for Wellington who got off of to a flat start against the visiting Toronto Jr. Canadians Thursday and fell 4-1.

Dissecting the entire weekend, Wellington Dukes Coach Derek Smith said his club played about five of nine periods and came out with a positive result on the whole.

“On Sunday, we played an outstanding 40 minutes and then let things get away and (Wellington net minder ) Ethan Morrow got peppered in the third and we don’t want that,” Smith told the Gazette Monday.

Wellington might have been guilty of putting self-preservation ahead of the work that laid ahead of them due to a sizeable lead and fatigue. But Smith wasn’t buying it. 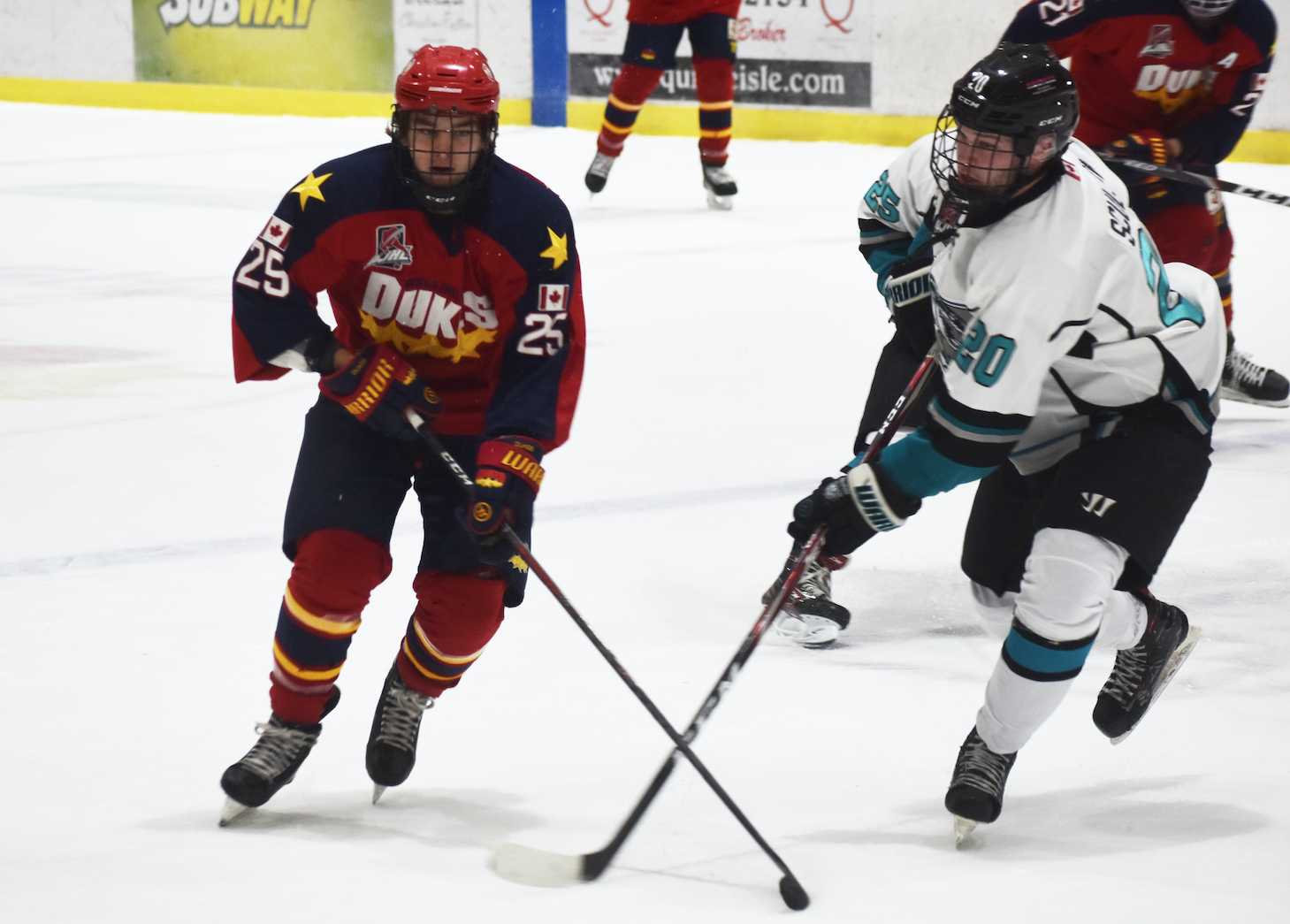 Wellington’s Will Mitchell had and pair of goals on Sunday in his club’s 7-4 win. (Jason Parks/Gazette Staff)

“We have to get that message across that everyone in the lineup has to be accountable and to make our young goalie work because we stop playing is unacceptable. In those situations we need to find a way to close games out, simplify and play it shift-by-shift until the clock hits zero,” Smith added.

Sunday’s win had a little bit of everything and Wellington was equal value for its 2-0 lead after the opening 20 minutes.

Freshman rookie Will Mitchell got the offence rolling at the 14:11 mark of the first as he deposited an Ethan Quick feed at the doorstep.

Just over three minutes later David Campbell added to Wellington’s lead 17:47 and then, at 18:28 after he had laid a cross check, Mason Reeves answered the bell with challenger Isiah Parris in a spirited scrap.

In the second, Wellington continued to roll as Emmet Pierce and Campbell spun some magic in the slot area for the captain’s power play tally at 3:57.

Barret Joint would get in on the act with a tally just over 30 seconds later to make it a 4-0 Dukes lead.

The avalanche of goals connoted as Harrison Ballard potted the eventual winner at 15:29 off a nice feed from Pierce and then Mitchell added his second of the game at 17:34  to make it a six spot for the Dukes.

In the third, Wellington was thinking more self preservation than scoring and it showed as the Muskies were able to bite back.

After Pierce made another deft crease area pass to Alex Case for the defender’s first OJHL goal of the season at 2:39 of the first, Jones would tally his second of the game on the powerplay at 11:07 to make it 7-2.

Lindsay’s Duncan Scallion had a pair in the last half of the third to get the score to 7-4 in favour of the hosts.

A night prior, Wellington’s new arrival in the crease offered up a nice debut in a dismantling of the host Toronto Patriots. 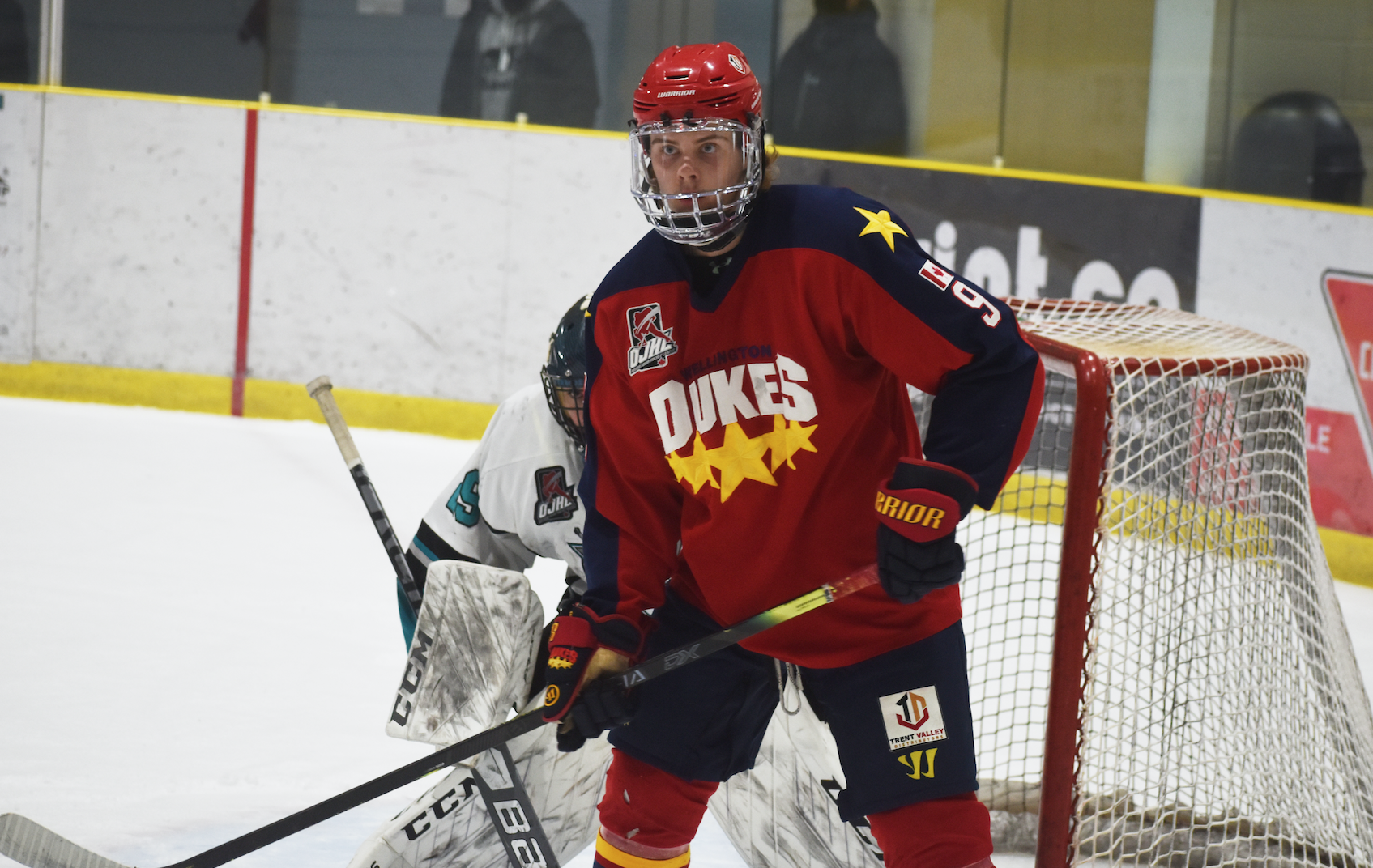 Carter Tahk, who previously was minding the net for Cobourg this season, has been added to the club’s roster as an insurance measure while Matt Dunsmoor recovers from a leg injury.

Tahk was spot on for Wellington in an 8-0 win, stopping all 30 Pats volleys sent the Mississauga native’s way.

Wellington’s Reeves would score on an individual effort at 3:07 as the Dukes would put four past Pats starter Kyle Curtin.

Goals by Jacob Vreugdenhil, Jonathon Balah and Pierce with under four minutes to play in the first finally chased Curtin.

In the second, Brodie McDougall, Joint and Pierce with his second of the game all found the back of the net behind Robert Andreakos Jr. as the lead was increased to 7-0 in favour of Wellington.

The Dukes’ Jaxen Boyer tacked on a goal midway through the third to make the final 8-0.

Wellington could have used a couple of those tallies back on Thursday against the highly vaunted Toronto Jr. Canadians.

Wellington’s Morrow gave up goals with under two minutes to play in each of the first two periods to give the guests a 2-0 lead after 40 minutes.

At the 6:34 mark of the third, Vreugdenhil finally bested Toronto starter Christian Trianni and the Dukes found themselves one successful salvo away from tying the game.

But Toronto’s version of the miniature Bleu, Blanc et Rouge are one of the league’s best and the visitors managed to keep the hosts at bay.

Matthew Wilde was able to reestablish the two goal spread at the 11:58 mark and then shot a puck into a gaping Wellington cage with just under 75 seconds left to finalize the scoring at 4-1.

“We were chasing the game early and it felt like we lacked the urgency in our game to compete with a team like the JC’s. That empty feeling after Thursday was definitely motivation for the weekend,” Smith said.

Wellington hits the road this weekend and plays in Caledon on Thursday, Minden on Saturday and plays in Trenton on Sunday.