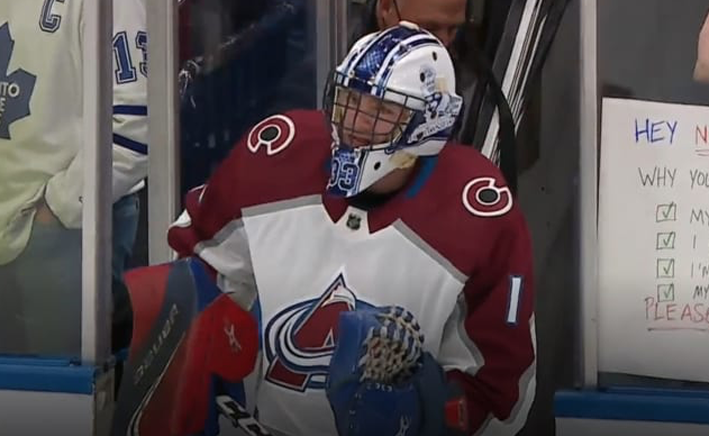 A SHORT FLIGHT Bloomfield’s Jett Alexander takes the ice in Toronto last week as an emergency back up goalie for the visiting Colorado Avalanche. (Sportsnet Screen Grab)

A breakdown at the airport.

One of those pitfalls befalling Justus Annunen is all it would have taken for County native Jett Alexander to have been signed by the Colorado Avalanche Wednesday night and wound up on the NHL’s club bench for their game at Scotiabank Arena against the host Toronto Maple Leafs.

Then, an injury or sickness to Colorado’s starter Jonas Johansson and Prince Edward County might see a red letter day in its sporting history-the first County born hockey player to play at the planet’s top professional level.

By now, most have heard that opportunity didn’t materialize. Alexander took the warm up for the Avs, stuck around in a dressing room until Annunen arrived to the arena from the American Hockey League’s Colorado Eagles and then watched the game- an 8-3 win for the Leafs- from the concourse. 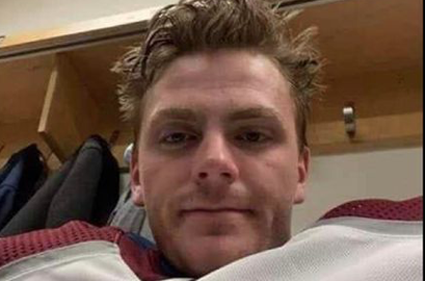 But there was no shortage of local hockey fans Wednesday night that weren’t wishing some kind of voodoo upon the former Quebec Nordiques organization and a chance for their Jett to stare down superstars such as Auston Matthews and John Tavares with the eyes of a nation, and, more importantly, Prince Edward County, watching with great interest.

“It was an incredible experience and I know a lot of people in the County were kind of watching warm, trying to figure out if I was going to get on the bench,” Alexander said with a laugh. “It’s alway nice to feel that support from home and it’s appreciated.”

Back in 2020, hockey fans will recall Zamboni driver David Ayres was catapulted from anonymity into semi-stardom when he ended up playing goal for the visiting Carolina Hurricanes.

Alexander currently toils with the University of Toronto Varsity Blues and, along with goaltending partner Alex Bishop, are part of the EBUG relief system should the Leafs or their opposition see a goalie go down prior to the game. Wednesday night was Alexander’s turn to come to Scotiabank and be in the building in case the rarest of rare occasions happen.

But before he could even think about making his way to the Leaf’s home rink, Alexander was notified by Leafs brass he would be strapping on the pads ahead of that night’s game. Between signing an amateur tryout contract that provides insurance in case of injury, Alexander was busy trying to finish a paper ahead of Semester One exams.

“I don’t even know what I wrote,” Alexander said.

Alexander knew well in advance his appearance for the Avs would be short and sweet. “I knew before the game I wouldn’t be on the bench because their AHL guy was en route and if I was on the bench, I would have been “rostered” and their guy wouldn’t have been able to swap out with me,” he explained.

Of course,with the regularity the Leafs were lighting the lamp, perhaps it was a blessing an NHL debut didn’t materialize.

Or maybe Alexander could have given the Avs more of a fighting chance.

Nevertheless, for the goalie who set an Ontario Junior Hockey League record with 10 shutouts for his North York Rangers in 2017-18, just being able to assist the Leafs and the Avs on a week night in early December was a thrill.

“The staff was awesome and helpful the moment I arrived at the arena. It’s such a world class organization and the people within it made it an easy process considering it was so short notice and bizarre,” he said, adding he only got to meet and speak with the Avs once he was on the ice, facing Nathan McKinnon, Nazem Kadri and fellow Canadian Junior Hockey League grad Cale Makar.

“They were all really nice and asked how I was doing and gave me some pad taps and stuff. I’m sure they knew what I was feeling and helped to make me feel at home even if it was just 18 minutes.” Alexander actually disrupted McKinnon’s routine of being the last one off the ice for warmup on the Colorado side because of COVID restrictions. Alexander was dressing in a separate area apart from the Avs because of the restrictions “It wasn’t me trying to big dog Nate McKinnon,” Alexander chuckled.

“But ya it was definitely more of an excuse to soak it all in.” While there are around a handful of EBUG’s in the system, Alexander intends to keep up with his assignments for Leafs home games in 2021-22.

And who knows? Maybe, with a little bit of help from the Hockey Gods, one night this winter with Canada watching, Prince Edward County will finally be able to boast its first addition to the NHL.