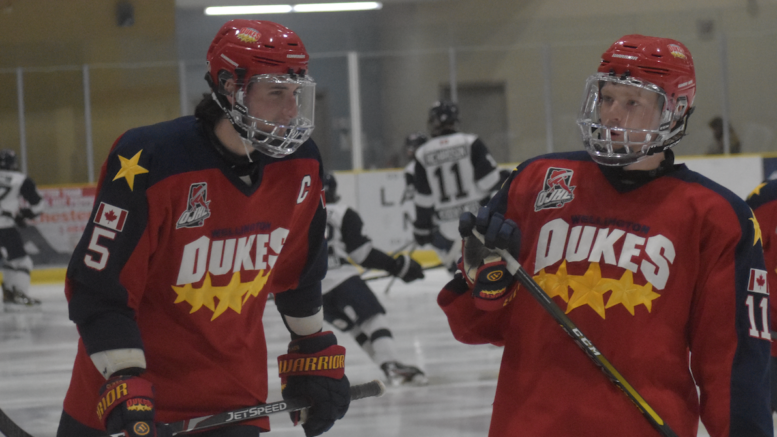 A total of two wins and a do-over on a bad start?

The Wellington Dukes will take that running towards the end of the 2021 portion of their Ontario Junior Hockey League regular season schedule.

The club sandwiched wins in Caledon and Trenton  around a false start in Minden against the Haliburton Huskies on Saturday.

Wellington (16-10-2) trailed the hosts 2-0 when a power outage at the SG Nesbitt Memorial Arena Saturday afternoon struck at the end of the first period and forced a cancelation after 20 minutes of play. Wild wind storms forced the cancellation of several sports events across the province Saturday.

The OJHL has ruled the game will start anew later in the new year and a bad start to a game that won’t count in the standings means the locals took all four points available to them this weekend, starting with Thursday’s 6-2 win in Caledon.

Dukes Head Coach Derek Smith said his club was well worth the two points in each of the road victiories Wellington secured this weekend.

“It’s a heck of a long travel day for us but I thought we had a very good first period in Caledon and that set us up for a very good night overall,” Smith said.

The club shot out to a 6-0 margin through 55 minutes of play and, perhaps thinking of the return ride back to Prince Edward County, the club surrounded a pair of goals to the Admirals to make the final score a little more appealing to the hosts.

“We let our foot off the gas pedal and that hurt us a bit at the end. We played a pretty solid game mice the last five minutes,” Smith said.

Wellington was staked to a 1-0 lead at the 2:24 mark of the first when Corbin Roach picked up his this goal of the year off a Barret Joynt feed.

In the second, the Dukes march to the Admirals net continued as captain Emmet Pierce had a pair of tallies that sandwiched Harrison Ballard’s 13th of the year.

In the third and up a 4-0, the Dukes offence continued to click.

Jonathon Balah’s power play tally at 3:12 extended the Dukes lead to a handful and then Mason Reeves and Balah had a hand in Jaxen Boyer’s second of the season at 11:11.

Wellington’s starter Ethan Morrow was as sound as a pound throughout the contest but a complacent Dukes squad dashed any hopes of a second goose egg this season as Josiah Kraayenbrink and Conor Thacker lit the lamp with under four minutes left to make the final 6-2.

While Wellington would give up a goal midway through  the first period against the host Golden Hawks, the Dukes were able to grind down the East Division hosts over the next 50 minutes.

“I thought we had great intensity and despite giving up a goal in the early part of the game, we were able to feed off that incredible atmosphere and come back with a huge 60 minute effort,” Smith said.

Sam D’amico’s seeing-eye shot from the blue line was the only blemish on an otherwise outstanding effort from Carter Tahk.

Wellington didn’t waste too much time getting back to even footing, as Trenton native Ethan Quick responded at 12:15 with a power play marker.

Balah deserves credit for holding the line and setting the play in motion that allowed Pierce to find Quick at the net for a quick one timer that beat Trenton’s William Nguyen.

The game remained tied through the second and into the last part of the third period.

A punishing hit by Liam Whitaker on a Trenton defender at the Dukes blue line allowed David Campbell to come back the other way up the ice and gain the zone on a 2-on-1 rush with Pierce.

Campbell made a slick pass to the captain on the doorstep at 10:17 of the third and the Dukes pushed ahead for the first time in the contest.

Campbell pounced on a loose puck in the Trenton zone and set up Jacob Vreugdenhil in the high slot.

Vreugdenhil hold miss but Campbell wound up with the puck on his stick again and tried the captain who snapped home his 17th of the season from just above the dot.

Just under three minutes later, Balah was  spot on again, feeding Vreugdenhil in stride and Wellington’s leading point getter blasted his 10th of the campaign to put Trenton to bed.

Tahk made 33 saves in the win.

Wellington is in Toronto Saturday to play the Patriots and then return to the Dukedome for the final time in 2021 on Monday when they host Caledon.