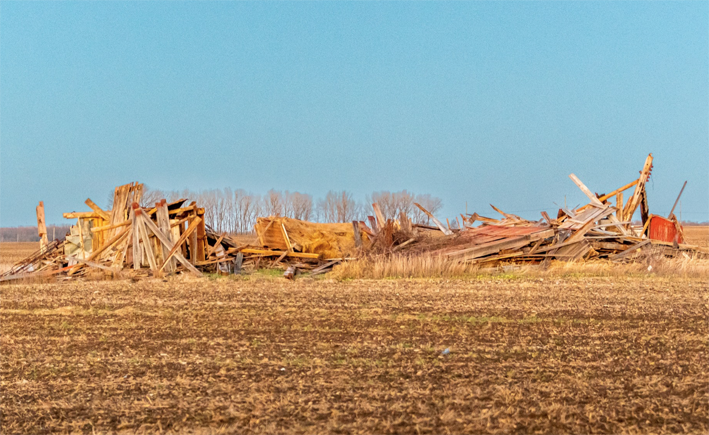 DOWN IT GOES A vacant barn on County Road 4 between Tubbs and Jones Roads didn’t survive Saturday night’s big blow. (Dave Tugwood for the Gazette)

It’s hardly the list any shivering and in-the-dark Prince Edward County resident wants to be at the top of but it was made official by Environment Canada Sunday.

Gusts in a wicked wind storm overnight Saturday reached a speed of 130 km/h, making Point Petre the windiest place in the province. The mark was equaled to wind speeds observed at Point Colborne, leaving this community in a tie in a competition no one wanted to be a part of in early December, if ever. Roadways throughout Prince Edward County were a mess as limbs, debris and power lines were pushed from their perches. Trees were uprooted and a number of structures in various states of repair-or disrepair as the case may have been- were toppled.

Prince Edward OPP responded to nearly 50 calls in the evening hours, many related to the heavy winds as well as some vehicle collisions. Hydro One reported several outages in the area and some local residents were without power for nearly 36 hour in some instances.

In local sports, the storm forced the cancellation of Picton Pirates-Frankford Huskies game as that Quinte West village was left without power, and, much further north, the storm knocked out power in the town of Minden where the Wellington Dukes were playing the Haliburton County Huskies. Both games have been rescheduled.