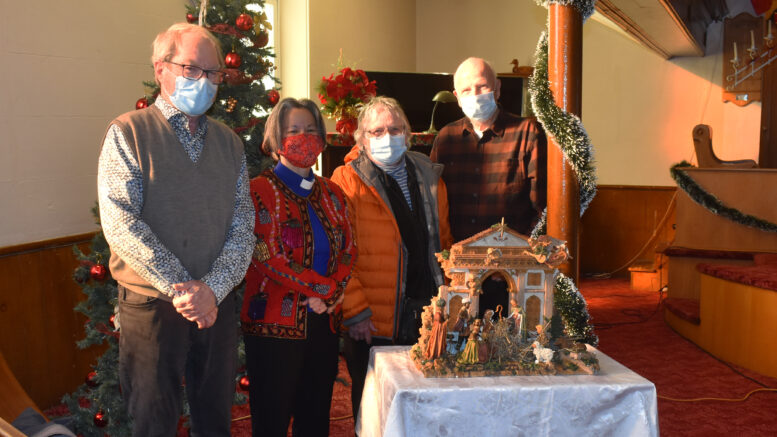 Bloomfield’s historic place of worship is celebrating 150 years of being a house of God on the village’s Main Street.

In 1871, Methodists consecrated a one story brick building on land donated by Adam Henry Saylor and improvements and expansions took place in subsequent years to give the structure its familiar shape. Dual front entrances were added in 1874 and a parsonage was built in 1879 at a building cost of $1,054.

In 1904, the church went through an extensive remodelling, with a choir loft being added, new pews and stained-glass windows being installed.

In 1925, the union of Methodist, Presbyterian and Congregational Churches was enacted by the House of Commons and the name became the Bloomfield United Church.

In 1930, a new electric organ was installed, replacing the old hand-pumped instrument.  Several years later, the Sunday School extension was added and, in 1956, a modern kitchen was added.

In 1925, the union of Methodist, Presbyterian and Congregational Churches was consummated and the name became the Bloomfield United Church.  This union was established by an act of the Canadian Parliament.

While the church building has survived a century and a half, the Bloomfield congregation actually predates the structure and will it’s bicentennial will be celebrated in 2023.

It was in 1823 when circuit rider Rev. Anson Green brought the good news to believers in the parlour of a home on Main St.

Rev. Cathy Duggan said two centuries ago times were very different. The manner in which regular services were attended and observed were formulaic.

“But we are going through a time now where COVID has caused everyone to have a big rethink of everything. We are trying to consider how we can be even more engaged and open to the community so we can be here for another 200 years,” Duggan told the Gazette, agreeing that the challenges facing the people of the planet seem to happen in cycles and adding the latest pandemic seems to be pushing people to reflect and adapt and to realize what is really valued in this life.

“A question we ask is ‘What’s the most the important thing about this congregation and what do we have to offer?’”

Developing new partnerships are one way in which the body is reaching out into the community and establishing a renewed sense of connection. Bloomfield United is partnering with the Bloomfield Area Business Association on mutually common goals and initiatives that are needed in the community.

If attending in person service isn’t a option, the church has a Youtube channel to allow worshipers to get caught up during the week.

“If people are not able to be here in person on Sunday, this allows them to be able to catch up during the week and keeps every member in touch with what’s happening,” Duggan said. “Again, it’s part of the question of ‘How can we continue to be church but also be flexible and and open?’. The days of everyone sitting down and setting one hour aside every Sunday to worship were over before the pandemic.”

Duggan added the only drawback of attending a service virtually was that one might miss out on the fellowship of friendliest and warmest group of parishioners around.

“I know all United Church clergy think that about their congregation but in this case, it’s true,” she said with a laugh.