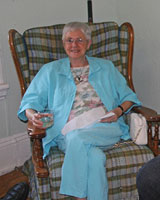 Bernice May Edwards (nee Bradley)
February 8, 1930 – December 25, 2021
On Christmas morning, Bernice Edwards, wife, mother, randmother, great-grandmother and Aunt, assed away peacefully in her ninety-second year in Belleville, ON. Bernice will be lovingly remembered by her daughter, Judi (John), daughter-in-law, Connie, grand-children, Allison, Sean (Kristen) and Stephanie (Matt), step-grandson, Kevin (Alana), and great-grandchildren, Melanie, Kelsey, Caleb, Abigail, Jonah and Emerson. She is predeceased by her husband, Jack, son, David (Nobles), brother-in-law and sister-in-law Ralph and Pat, and her many siblings. Born in Brockville, ON, Bernice moved to Toronto in the mid 1950s, where she met her husband, Jack Edwards. She moved to Winnipeg, where they married in 1955. Over the years, they made their home in many parts of Canada, including Montreal, Richmond Hill, Winnipeg, Toronto, Dyson Lake (ON), Halifax, Porter’s Lake (NS), Big Bald Lake (ON; while wintering in Naples, Florida) and Markham. They formed lifelong friendships everywhere they lived. Their 20 years in Nova Scotia were especially memorable, living in Halifax and cottaging at Porter’s Lake. In Halifax, they proudly owned and operated Atlantic Oxygen Limited. Together and with their friends, they golfed, curled, cottaged and partied (and partied some more!). A renowned porcelain artist and teacher, Bernice was a valued member of the Naples & Ontario chapters of the Porcelain Artists’ Guild. She was also an avid reader and bridge player. In 2006, with Jack needing the support of a LTC home, they moved to Prince Edward County, Ontario. Bernice began her next adventure, living with Judi and John. Bernice enjoyed her new home, making many friends through the Women’s Institute and volunteering at the Community Care for Senior’s shop. In 2014 she moved to Belleville, to Quinte Gardens, followed by Hastings Manner in 2016. Hastings Manor provided her last home and the care she required into her 90s. Bernice’s family is forever grateful for the care, love and support she received in her last years from the many doctors, nurses, PSWs and other health care and support staff at both Quinte Gardens and Hastings Manor. Always generous and with a friendly smile, Bernice was stubborn and determined to the very end. She will be missed and remembered by all who knew her. Memorial donations can be made to the Alzheimer’s Society Of Ontario or charity of your choice. Online condolences may be shared at www.ainsworthfuneralhome.com Arrangements entrusted to Ainsworth Funeral Home, 288 Noxon Avenue, Wellington