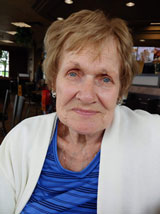 Peacefully entered into rest at the Prince Edward County Memorial Hospital, Picton on Tuesday, January 4, 2022, Wanda Robson (nee Palka) of Picton died at the age of 87. She was the daughter of the late Walter & Helen Palka (nee Rzepa) and wife of the late Ralph. Wanda was the loving mother of Reid (Jennifer Douglas), Philip (Lorena Maggiacomo) and Jackie Robson, all of Toronto. She was the dearest grandmother of Ella, Nico, and Jenna. Wanda is survived by her sister Sophie Demeo and her brother Walter Palka Jr, both of Thunder Bay and she will be remembered by her many nieces and nephews. Born and raised in Thunder Bay, Wanda graduated as a nurse, and worked in Thunder Bay and later, Toronto, where she met her husband, Ralph. Wanda and Ralph moved to Picton in 1965, where they raised three kids on Low Street, made life-long friends and formed many special memories. Wanda worked in various nursing-related and volunteer roles in Picton, and was a devout member of St. Gregory’s Catholic Church. She loved the beauty of the county and spent many an evening with a de-caff coffee in hand watching the sun set at Sandbanks. Mrs. Robson is resting at the Rushnell Funeral Home – Picton Chapel, 33 Main Street West, Picton (613-476-2450). A Service for Wanda will be planned for the Spring of 2022. If desired, donations to the Prince Edward County Memorial Hospital Foundation – Back the Build would be appreciated by the family. Online condolences at: www.rushnellfamilyservices.com