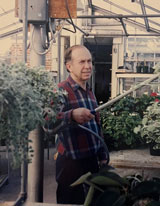 Thomas James Huff
Retired teacher from LCVI
Born to Delmer and Henrietta Huff (nee Foster) in Picton, Ontario on June 29th, 1940. Tommy grew up on a dairy farm in Prince Edward County with older brother Larry (Penny) Huff and younger sister Betsy Cole. He was active in 4-H and Junior Farmers. Tom graduated from the University of Guelph in 1965. He and his lifelong OAC friends may or may not have been involved in some shenanigans. Tom began teaching at LCVI in 1966, and remained there until his retirement in 1998. “Mr. Huff” taught math, agriculture, and science, but will be remembered most notably as the horticulture teacher. Many of the trees and gardens around LCVI were planted by Mr. Huff and his classes. His love of gardening led him to be involved later on with the Lilac Gardens of Lindsay. Tom married Mary Ann Vanderburg in 1969 and they welcomed two children into their family, Tanya (Rob) Garland, and James (Kelly Vanier) Huff. Tom loved camping and the Huff family spent many summers at Bon Echo Provincial Park or travelling throughout Canada. Tom and Mary Ann were thrilled to welcome their grandchildren Ruth, Jack, Ben and Olivia! Tom loved to visit with family and friends! Lunches at the Durham cafe, games of bridge and euchre, Tai Chi and travelling were favourite activities. After Tom’s diagnosis of Parkinson’s disease and Mary Ann’s death due to breast cancer in 2017, Tom moved to Caressant Care (Mary St.). There may or may not have been more shenanigans with his new friend Larry! Tom died on January 7, 2022. He will be greatly missed by those he’s left behind. A celebration of life will be held in June. If desired, donations to Kawartha Lakes Food Source, Boys and Girls Club of Kawartha Lakes, or, Parkinson Canada would be appreciated. Donations and online condolences may be made at www.lakelandfuneralcentre.com