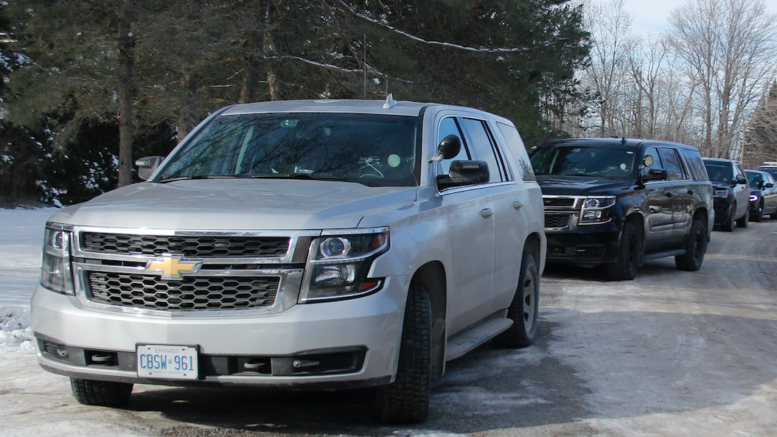 Prince Edward OPP report a woman, 59, was walking her dog on the ice dunes along County Road 20/ Hyucks Point Road when she fell through into the frigid lake.

Information was obtained that an individual was on the ice walking their dog and a  subsequent search lead to the person being located deceased in the water.

The person was located by PEC Fire and Rescue and brought to shore around 7 p.m.

Prince Edward County Fire and Rescue said they located the woman’s dog but it also died.

Fire and Rescue have now experienced two incidents in the past couple of weeks where dog owners have gone on the ice and fallen through while trying to rescue their pets.

On Jan. 4 on South Bay, a pair of individuals went on to the ice in an attempt to rescue a pet canine that had wandered onto the frozen water.

Using a rope line, rescue crews were able to bring the owners to shore and eventually rescue the dog as well.

Both persons were treated for hypothermia-one at the scene and the other at Prince Edward County Memorial Hospital.

County of Prince Edward Fire Chief Chad Brown reminds residents to keep pets away from the edges of all bodies of water when enjoying the outdoors.  When pets fall through the ice, call 911 immediately. Never attempt to rescue your pet when they fallen through the ice.

Prince Edward OPP remind pedestrians and winter sports enthusiasts that while the ice may look tempting for ice fishing, skating, walking or other activities, please do not trust the ice.

“The temperatures have been erratic this winter and much of the ice is not thick enough to safely support people. Don’t put your own life, and the lives of first responders at risk,” Community Safety / Media Relations Officer Provincial Constable Aaron Miller said. “If you do venture out, proper use of safety equipment can reduce the risks of traveling over ice covered bodies of water. Possibilities include: wearing of survival suits, carrying picks (used to grip ice to pull yourself out of the water) and carrying a rescue rope.”