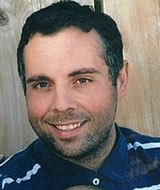 Nicholas Harold Garnet “Nick” Barsley
October 21, 1985 – January 2, 2022
Entered into rest at his home surrounded by the love of his family on Sunday, January 2, 2022, Nick Barsley of Marysville passed away at the age of 36. He was the loved son of George & Marilyn Barsley of Demorestville and the devoted husband of Christina (nee Ash). Nick was the cherished and proud father of Caleb and Cody, both at home. He was the son-in-law of Ted & Roxanne Ash of Belleville and the only brother of Sara Svensson (Johan) of Kingston and Amanda Bailey (Robert) of Belleville. Nick will be sadly missed by his many nieces, nephews, aunts, uncles, cousins, his sister-in-law April Campbell (Lawrence) of Belleville and his special friend Patrick Roloson of Demorestville. Nick took pride in his work at Goodyear, and enjoyed his time with his co-workers and friends. He developed a talent for renovating and his home reflects all his hard work. Nick’s many ambitions for the future were tragically squashed by this devastating illness. His loss is immeasurable, and his passion was his family. Nick is resting at the Rushnell Funeral Home – Picton Chapel, 33 Main Street West, Picton (613-476-2450). In keeping with Nick’s wishes, there will be no visitation or service at this time. A Celebration of Nick’s Life will be held at a later date, to be announced. Cremation has taken place. If desired, donations to the Canadian Cancer Society or to a Fund Set Up for his boys, Caleb and Cody, (https://gofund.me/da6516c5) would be appreciated by the family. Online condolences and to share memories of Nick, please visit: www.rushnellfamilyservices.com