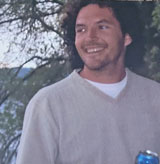 March 30, 1980 – January 13, 2022
On January 13, 2022 Devon Williams of Keremeos, BC passed away with his family holding his hand. He will be dearly missed by his friend, Shelly; children, Erica of Picton, ON, Ben, Ethan, Stephanie and Curtis of Belleville, ON; grandson, Lincoln of Picton ON; dad, Don (Helena) Williams of Keremeos, BC; mom, Maurene Sensenstein (Steve Monroe) of Picton, ON; grandparents, Joe and Liz Sensenstein and Harold and Dorene Williams of Picton ON; sister, Nikki Williams of Picton ON; sister, Jennie (Kris) Ruman of Belleville, ON; nieces and nephews, Jordan, Josh, Avery, Kristopher, Brittany, Noah and Molly. Devon was a gifted carpenter and took pleasure in his work. Devon was full of laughter and a smile that could light up a room. He brought so much joy to anyone he met in his many adventures.  Devon was also honoured to be a member of the Royal Canadian Legion Branch 192 in Keremeos, BC. They honoured him by lowering their flag to half-mast on the day of his passing. He will be laid to rest in the Mountains of British Columbia where he was the happiest.  A spring service will be announced at a later date.  Donations in his memory can be made to the local food bank in your area. To send condolences please visit www.hansonsfuneral.ca.