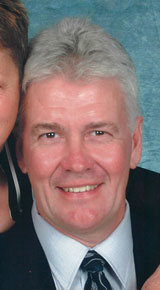 April 2, 1947 – January 21, 2022
Sales & Promotions – County FM
Member of St. Andrew’s Presbyterian Church, Picton and Picton Rotary Club –
Entered into rest at Prince Edward County Memorial Hospital, Picton on Friday, January 21, 2022, Jim Barkman of Picton died at the age of 74. Jim is survived by his loving wife Jackie Soorsma, his siblings, Lloyd and Jane, Kathy and Bruce. Jackie’s family, Mother-in-law Elizabeth Soorsma, siblings, Fred and Eva, Leviena, Neil and Nancy, many nieces, nephews, and their families. He was predeceased by his father Harold, mother Frances, sister Margaret, and father-in-law Louie. Legend has it that Jim’s birth straddled the line between April 1st and 2nd, so much so that the attending physician looked at the clock and said, “Better make it the Second!” Regardless how close he came to being an April Fools baby, Jim was no fool. In 1955, when his father died, Jim was suddenly thrust into the role of being a farm hand. At his tender young age, he learned how to maintain the tractor, and be in charge of field work. He did this until graduation from high school, when he left home to live and work in Winnipeg. Jim was a mentor to his siblings, teaching them to drive, freeing a snow-stuck car, and of course, changing a tire. One of his younger siblings remembers this tire change instruction vividly because it was a timed affair on a muddy part of the yard! Jim was athletic. He was the pitcher for the school’s softball team. And, as he was tall (6’1″ on his 14th birthday), he was a basketball standout in high school, where championships were won and several of his scoring achievements were still on the record books many years after his graduation. He coached and played football, curled, played hockey, but his love turned to sailing with his beloved Jackie when early in their life together, Jim and Jackie rented a sailboat for an outing on Lake of the Woods, and they were hooked! This led to a life with several sailboats, lots of regattas and trophies. Jim was also generous. When he found out Lloyd and Jane were planning a road trip on their honeymoon, he traded cars with them for a week, as “Lloyd’s car was a pile of junk and wouldn’t make it there and back”. Questioned later as to why he did this, he simply said it was the right thing to do. The Golden Rule. Jim was transferred from Manitoba to Ontario while he was working for SC Johnson Professional in July 1980. During his career he had many roles, such as National Sales Executive, Regional Market/Sales Manager, New Business Development Manager, Sales Training & Development Manager. Jim continued to enjoy going skiing, both downhill and cross country and going on trips to many interesting places. Competitive sailing was his greatest pleasure starting in dinghy’s then moving to a 24 ft. keel-boat and finally loved sailing around Lake Ontario and Prince Edward County. In January 2009 Jim and Jackie moved into their new home in Prince Edward County, Ontario. Once there he rekindled his interest in curling, joined PECFN, as he had a profound love for nature. Enjoyed walking, hiking and communing with the natural world around him. He drove school bus, enjoyed the interactions with the children, and had many a story to tell about the happenings on his bus. He joined St Andrews Presbyterian Church in Picton and sang in their choir. Jim volunteered for many organizations such as The Regent Theatre in Picton. Jim enjoyed working at the local Radio Station 99.3 FM in Sales. He felt very appreciated and supported by management and fellow staff. As a Rotarian he originated the Rotary Lilac Ride, and worked hard at the success of this fund raiser. Mr. Barkman is resting at the Rushnell Funeral Home – Picton Chapel, 33 Main Street West, Picton (613-476-2450). Due to Covid protocols, a Celebration of Life will be held at a later time. Cremation has taken place. If desired, donations to Reaching for Rainbows would be appreciated by the family. Online condolences at www.rushnellfamilyservices.com