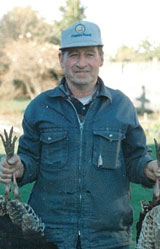 Owner/Bricklayer – R. J. Masonry
Services Entered into rest at Prince Edward County Memorial Hospital, Picton on Friday, January 21, 2022, Roger Jones of Picton died at the age of 82. He was the son of the late Pierce & Margaret Jones (nee Thompson) and the beloved husband for 57 years to Linda (nee Vincent). Roger was the loving father of Paul (Angela) of Picton and Pamela Miller (Raymond) of Napanee. He was the dearest grandfather of Brock, Evan, Kirsten, Kyle, Emily, Sarah, Evan and Carson. Roger is survived by his sisters Lulella Nash (late Gary) of St. Mary’s, Peggy Walker (John) of Brantford and by his brother Doug (Pat) of Picton. He is predeceased by his brother Hugh and will be fondly remembered by his many nieces and nephews. Mr. Jones is resting at the Rushnell Funeral Home – Picton Chapel, 33 Main Street West, Picton (613-476-2450). In keeping with Roger’s wishes, there will be no visitation or funeral service. Cremation has taken place and a Graveside Service will be held at Glenwood Cemetery in the Spring. If desired, donations to the Salvation Army would be appreciated by the family. Online condolences at www.rushnellfamilyservices.com