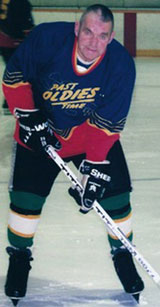 Derek Heard
November 5, 1927 – January 19, 2022
It is with profound sadness and heavy hearts that we announce the passing of Derek in his 95th year. He was the son of the late William and Nellie Heard and husband to his late wife Jinnie (Fuller). Derek was the loving father of Nancy Cox (Tim) of Bloomfield, Sue Crnic (Ray) of Canberra, Australia and the late Jane Fobert (Ray) of Belleville. He was the most loving grandfather of Dylan Cox (Vicki), Meghan Stevens (Eddie) from the County as well as Neil Crnic (Sasha), Alicia Iervasi (Anthony) and Amy Leech (Ben) all from Australia. He was also proud Grampa GG to 12 great grandchildren. Derek was brother to the later Arthur Heard and will be most fondly remembered by his nieces and nephews and friends. Derek worked and played hard. He worked at Mead Johnson in Belleville for over 40 Years. Derek’s biggest passion was hockey. He was an avid hockey player and played the game into his early 80’s. He was often called Gordie years ago after his idol Gordie Howe. He walked to work every day rain or shine. He rode his bike far and wide, roller bladed and he loved to dance always in the shoes he was married in. Father built a cottage at North Beach in 1959 and gave memories to many that were some of the happiest days of our lives. He was a friend to many, young and old alike. A shining example of a wonderful father and what one should strive for as a person. He will be remembered as a gentleman on and off the ice and as a gentle man. Our Mr. Hockey. We celebrate a life well lived. The last few years of life for Derek were not kind but he was loved and well looked after by some loving, dedicated personal care workers and nurses at Kentwood Nursing Home. For that we are eternally grateful. Cremation has taken place. Derek is reunited with his loving wife and daughter and will be laid to rest with them at a private graveside service when family can be reunited. A Celebration of Life will be held at that time. Online condolences may be shared at www.ainsworthfuneralhome.com
If desired, memorial donations to Prince Edward County Memorial Hospital Foundation Back the Build would be appreciated by the family. Arrangements entrusted to Ainsworth Funeral Home, 288 Noxon Avenue, Wellington