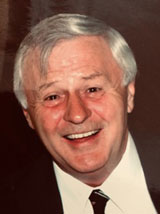 Robin Gillcrist died suddenly on January 25th, 2022 at Kingston General Hospital of heart failure. He was the son of the late “Gilly’ and Connie Gillcrist of England. He is survived by his wife of 45 years, Lila Wendy (nee Awde), his furry friends Remedy and Flouish, two sisters Kay Hatckett (Cliff) of Ipswich England and Stella Morrison (Jim) of Twyford, England, two Canadian brothers-in-law Brian Awde (Darlene), Jonathan Awde and his sister-in-law Debi Goodwin, many nieces and nephews and great nieces and nephews on both sides of the pond. Robin was born in Manchester England in 1939. He attended Bishop Vesey Grammar School in Sutton Coldfield from 1949 to 1956 where he played his favorite sport rugby. He immigrated to Canada in 1968 and worked for many years at North American Life before setting up his own Insurance brokage, G.A. Insurance. Robin lived most of his married life in the Mount Albert area before moving to Prince Edward County in 2014. His generosity, love of life and easy-going manner earned him many friends over the years. As one neighbour put it: “he was a right jolly chap.” He will be sadly missed. Two Celebrations of his life, one in the county and one in the Newmarket area will take place in the summer.
Online condolences may be shared at www.ainsworthfuneralhome.com
Arrangements entrusted to Ainsworth Funeral Home, 288 Noxon Avenue, Wellington