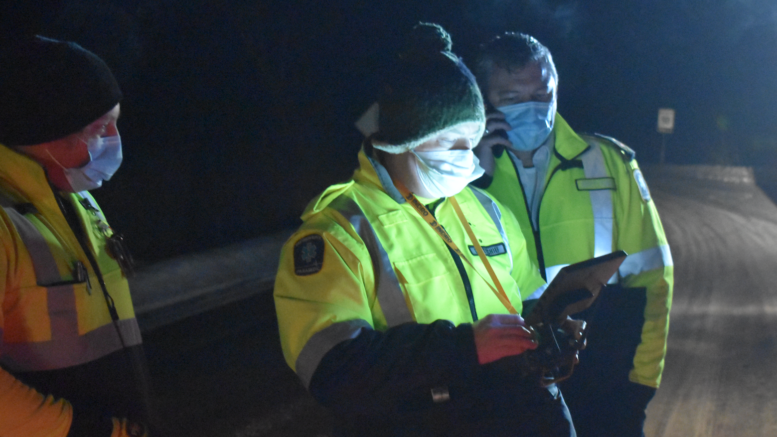 Monday night’s search for a wayward hiker in Sandbanks Provincial Park in the area of the Dunes had a very successful ending.

Members of the Prince Edward OPP, the K-9 unit, the Emergency Response Team, the OPP’s aviation sevice and the Hastings Quinte Paramedic Services responded to a missing female hiker around 7 p.m. as temperatures dipped to -12 celsius.

According to reports on the scene, a husband and wife were walking in the park from the municipal parking lot on County Road 12 adjacent to the Dunes parking lot when their pet canine took off.

The couple split up and the dog eventually returned to its male owner.

On the scene, OPP began a grid search of the trails and beach area while the Hastings Quinte Paramedic Services utilized their thermal imaging drone.

But by that time the search was just underway, the lost female hiker had traversed the 7.5 km between the Dunes and the far north point of Sandbanks at the Wellington channel.

The hiker alerted individuals on the opposite shore and, at 9:30 p.m.,  Prince Edward County Fire Rescue utilized a Fortuna inflatable watercraft to bring the hiker to safety.

The woman was treated for exposure and hypothermia at the scene and taken to Prince Edward County Memorial Hospital as a precaution.

OPP remind everyone heading out for any winter activity to be sure to plan ahead and remember some of the following tips:

“The Prince Edward County OPP would like to thank all involved in this search which lead to a successful conclusion,” added Provincial Constable and Community Safety / Media Relations Officer  Aaron Miller.