There’s a quite a bit to unpack if you’re a Canadian that wasn’t involved in this weekend’s 2022 Trucker Convoy for Freedom. And while former NHLer-turned-politico Theo Fleury predicted on Fox News around 10 per cent of the population were due to show up to the House of Commons, estimates from the ground indicated about 8,000 of the most oppressed Canadians participated in Saturday’s freedom fest/pee party.

Never let it be said this corner or this newspaper doesn’t support good grass roots initiatives and protests aimed at making governmental policy changes. Some of the best in-the-field experiences your humble scribe has enjoyed working on the last 15 years have been large scale farmer rallies at the House of Commons, the Ontario Legislature or even the parking lot of the Napanee Mall where former Prince Edward-Hastings MPP Ernie Parsons had the fortitude to show up and absorb the heckles from the crowd over then-Premier Dalton McGuinty’s inattention to the farmer’s plight-du-jour.

However, there’s a line and limit to what constitutes impassioned civil discourse and democratic protest versus unhinged radicalism, political hooliganism and playing footsies with insurrectionists.

Last week, when looking at the main players speaking as organizers of the convoy, it should have been clear to anyone paying attention to the alarming rise of right wing extremism in Canada that the mission of protesting a bilateral vaccine mandate 90 per cent of Canada’s cross border tuckers already agree to was going to ultimately be co-opted by the loons who thought they would just show up to the Hill with a Grade 10-quality screed to be presented to the Governor General and Senate and, magically, the results of the 2021 Federal Election were going to be washed out.

Whatever white nationalist organizers like Jason LaFace and Pat King were spending on “Constitutional Lawyers” in a coup to overthrow the government and replace it with a “Citizen’s Committee’ to govern, it apparently wasn’t enough.

So, as the convoy got closer to Ottawa and some the players showed their true selves through media interviews and were comparing unvaccinated truckers to Jews during the rise of Hitler in Nazi Germany, there should have been some alarm bells going off.

Evidently those bells didn’t ring out to Conservative Party of Canada Leader Erin O’Toole or Bay of Quinte MP Ryan Williams who chose to throw their weight behind the convoy in advance of Saturday.

And maybe, in its origin, there was a message from frustrated Canadians when wheels started rolling in British Columbia.

But by the time a swath of protesters had danced and urinated on the tomb of the unknown soldier, waved Nazi flags and Canadian flags with swastikas (on the 5th anniversary of the Quebec Mosque massacre no less) , harassed every journalist within spitting distance, stole food and beat up a displaced person at the Shepard of Good Hope soup kitchen, were belligerent and aggressive to shopkeepers and restaurant staff throughout Bytown trying to adhere to mask mandates and appropriated a statue of Terry Fox, O’Toole, Williams and others were distancing themselves from the louts, citing that well worn idiom of “bad apples” and that “democracy is messy.”

This corner would offer another in that “you’re only as good as the company you keep” and if it didn’t dawn on even the least enlightened participants of the convoy using a both swastikas and yellow Stars of David as a comparison to truckers who don’t want to get vaccinated was a bad choice then the indifference and/or ignorance is telling.

For the record, most who gathered on Saturday at Parliament Hill didn’t commit the aforementioned indecencies to the public and memorials. Some were in support of peaceful democratic protest. All are COVID fatigued (although not understanding the Coronavirus sets the timeline, not governments). Some showed up out of morbid curiosity.

Ultimately, the 2022 Trucker Convoy for Freedom wasn’t about COVID mandates because if it were, there would have been a days of protests at provincial capitals where most mandates originate. In the absence of action there, a national rally could have been organized. No, this convoy morphed as it travelled east and by the end of the long haul, it was largely about the hate people harbour for the Prime Minister, the normalizing of hooliganism, a void of leadership atop the CPC and a futile, ham-handed attempt to discard a federal election held just four months ago.

Well organized protests with simple and sound messaging can be instruments of change in a democracy. Saturday’s events lacked all of those tenets. 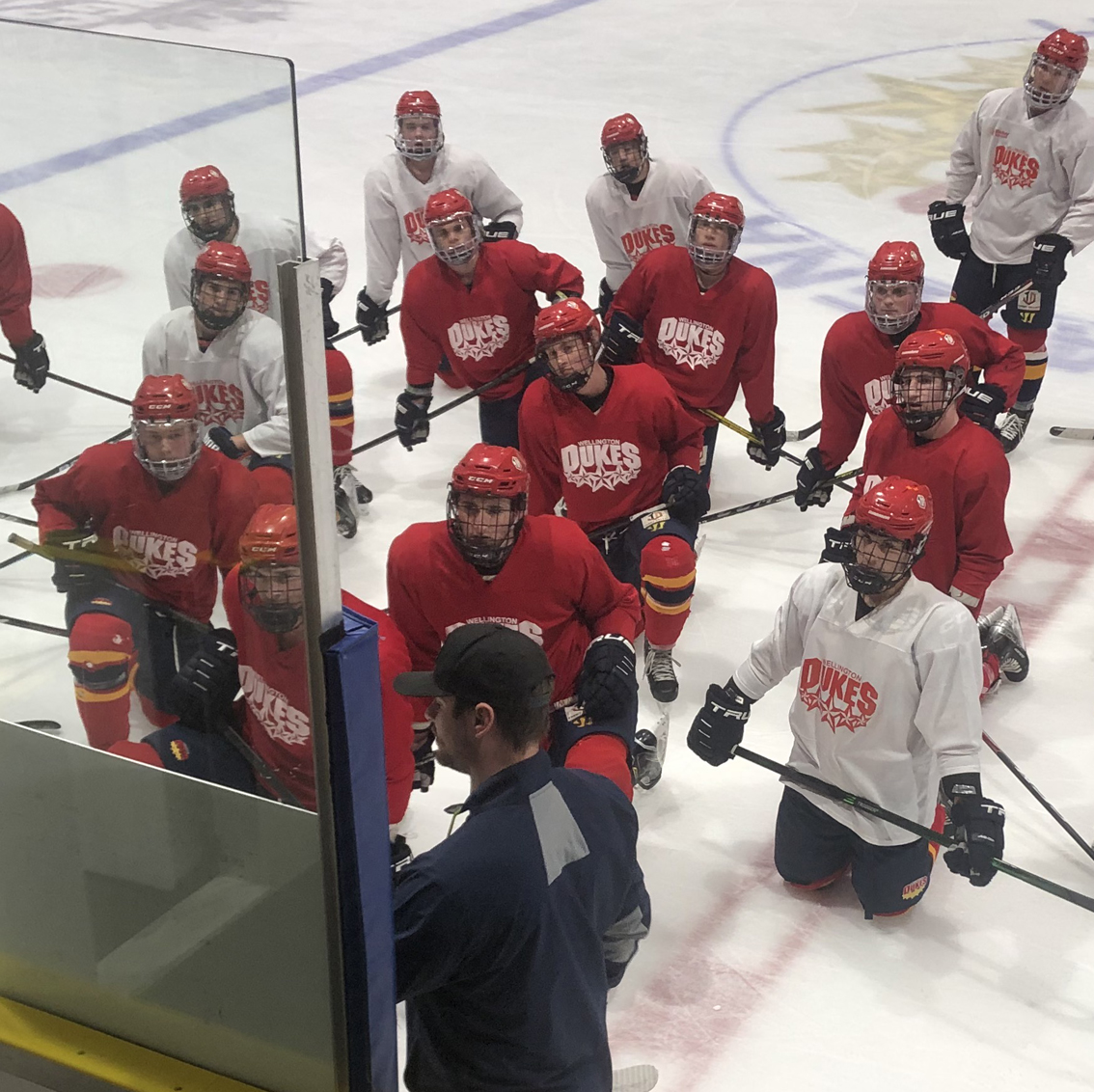 GETTING BACK AT IT – Lehigh Arena ice on Monday, working out the kinks from a pandemic-mandated six week layoff from Ontario Junior Hockey League action. The Dukes hit the road running this weekend, playing games at St. Mike’s Haliburton and Cobourg. Wellington Provincial Junior Hockey League affiliate the Picton Pirates are in action in Picton tonight, hosting the Frankford Huskies . (Jason Parks/ Gazette Staff)