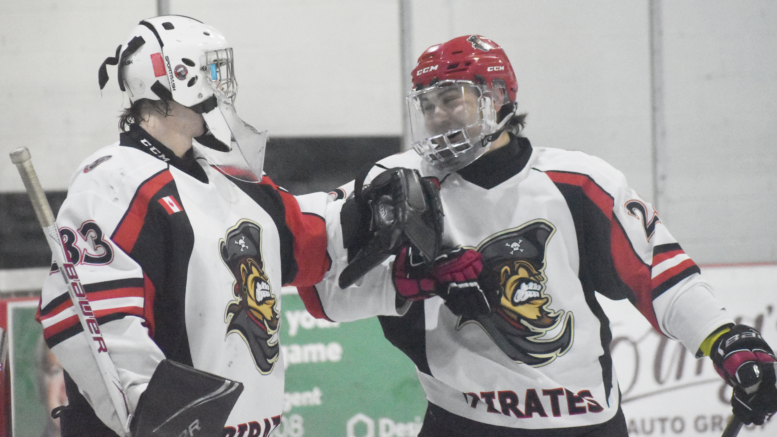 New Picton Pirates goaltender Owen Willis congratulates Jack Dow on his second goal of the game on Thursday against the visiting Frankford Huskies. Willis made 19 saves in his PJHL debut, picking up a 6-0 shutout. (Gazette Staff)

The old adage two of three ain’t bad will work for the Picton Pirates on their first weekend back in the rink after a six week layoff.

Picton took a pair of wins from the visiting Frankford Huskies Thursday and the host Campbellford Rebels Saturday night before falling to the Amherstiview Jets on Sunday afternoon. By taking four out of six available points, the Pirates moved their record to 12-10-1 and crept closer to the third place Port Hope Panthers who are in action Monday night in Frankfort.

“I think the goal for us coming in with only one practice under our belt was to come away with four points and try to stay as healthy as possible,” Pirates General Manager Jason Parks said. “We definitely incurred some day-to-day injuries but every team is going to go through that with a compressed schedule.”

Sunday afternoon’s game didn’t go according to Picton’s plan almost from the start when defenceman Derrick Vos was hampered with a hip pointer and had to exit the game in the first. Without Vos, veteran Hunter Matthysse, newcomer Ryan Bauder and suspended defender Adian MacDonnell, Picton’s defence corps became thin rapidly.

Vos returned to the team on Thursday and showed little by way of rink rust in his first two games back.

“Getting a top-end puck moving defenceman like Derrick back in our lineup is huge for us,” Parks added. “He will hopefully be good to go for the weekend and he’s exactly what our team needed as we restart the season.”

Despite getting out shot 17-7 in the first, Picton went to the dressing room down only 1-0. 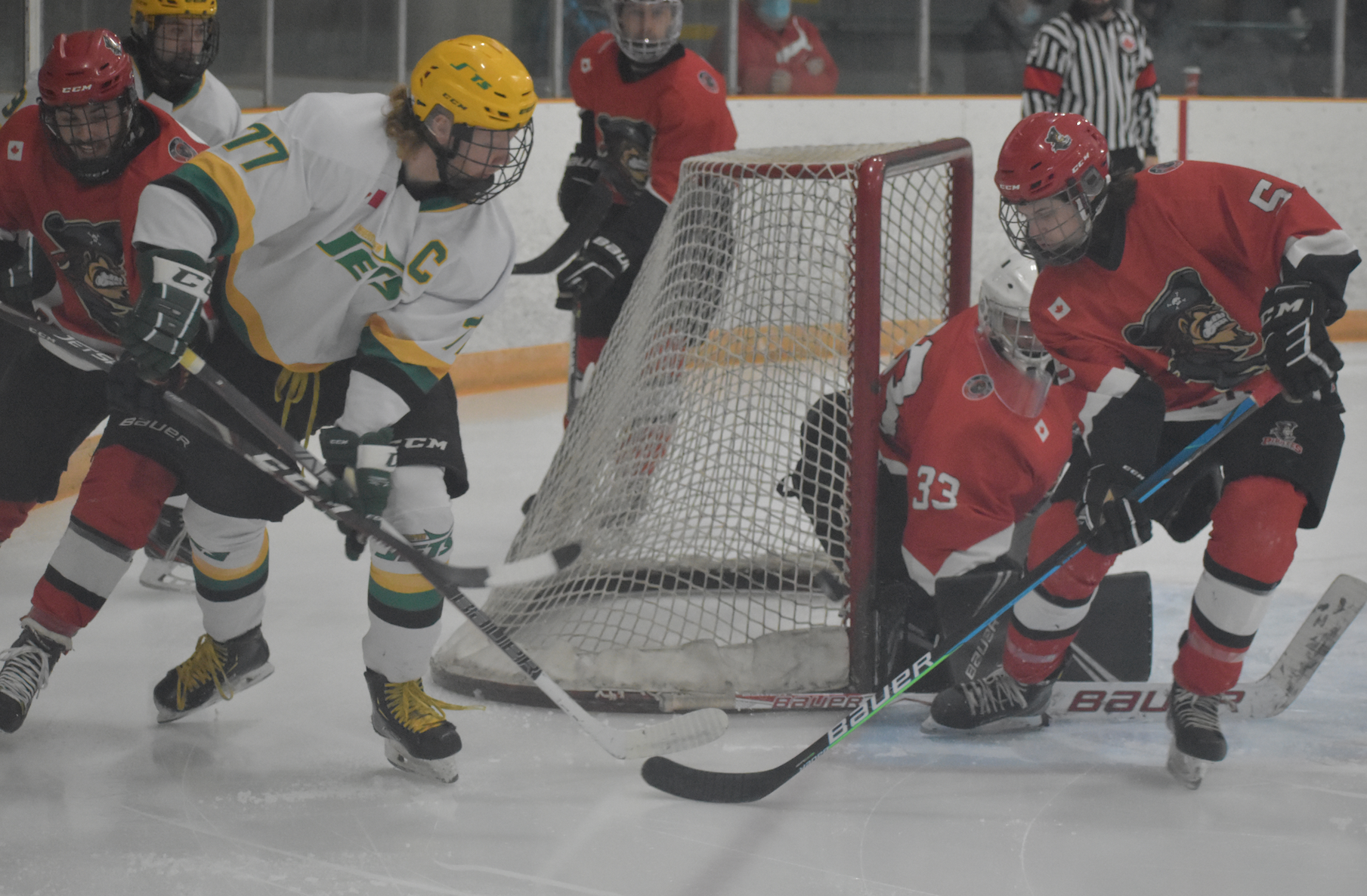 Ben Greenlees picked up a puck in the offensive zone off a broken play and picked the top corner on Pirates starter Owen Willis at 11:54.

“Willis was outstanding for us and that’s the type of goaltending we are going to need when we have guys out of the lineup,” Parks said.

Early in the second, Owen Bauder would score on a tip shot off a face off and that would be enough to put the Jets ahead to stay.

Elliot Belzile, Matt Halle and Zackery McMahon would also score to put the hosts ahead 5-0 after 40 minutes.

Picton would win the third as Noah Brant potted his 16th of the campaign off a face-off play with Landon McLellan winning the draw cleanly to pick up an assist.

Willis, left on his own a number of times in the contest, made 42 saves.

On Saturday night in Campbellford, Picton fell behind 1-0 in the first but a big effort from netminder Nolan Lane ensured the locals were able to come back on the Rebels and skate to a 5-2 win.

Picton’s rookie goalie made 37 saves for his seventh win of the season and Parks said Jr. A teams are starting to take note of the 17-year-old Wellington native.

“It’s not easy to be a rookie goalie in this league but Nolan looked very much and ease and very calm in the net Saturday,” the GM stated.

After Dennis Fisher opened the scoring off the draw to Lane’s left at 6:34, Picton’s other starry rookie Cole Stevenson bagged his seventh of the season, taking a TJ Strachan feed and ripping a bar-down wrist shot past Rebels starter Eric Martin at 10:46.

Picton doubled its lead later in the frame when Nate Boomhower made a power move at the Rebels net and notched a power play goal at 15:02.

It would be all Picton in the second as Brant would cash in twice, both off nice passes from McLellan.

Up 4-1, Devin Morrison added his second assist on the game when he teed up a one timer for Cole Lavender.

Lavender had a premonition he might bag his first of the season during pregame as it was his grandmother’s birthday and a hard slap shot between the wickets of Martin at 10:19 made for a special souvenir headed back to Prince Edward County.

In the third, Picton didn’t break until less than five minutes to go when Dryden Minifie set up Rebels rookie Adam Klass to make the final 5-2.

On Thursday, Boomhower’s wrap around goal at the midway point of the first period would stand up as a winner as Willis made 19 stops to pick up his first PJHL win and shutout in the same contest.

Boomhower and Jack Dow had a pair of goals each for Picton while Ian Harrison and Owen Dever tallied singles.

Willis made 19 saves in the victory.

“That was his first game since last season in Espanola and I know he was pretty happy afterwards,” Parks said.

Picton hosts Campbellford on Thursday and then travels to Napanee to play the Raiders Friday.