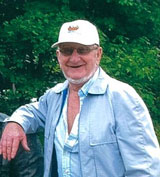 Entered into rest at his home after a lengthy battle on Tuesday, February 8, 2022, Mel Cole of East Lake died at the age of 76.  He was the son of the late Donald & Hilda Cole (nee Ferguson) and he was the devoted husband for 56 years of Sharon (nee Smallpiece).  Mel was the loving father of Lee (Tina) of Ameliasburg, Gord (Cindy) of Picton and Richard (Cindy) of East Lake and he was the grandfather of Zac, Devon, Donna, Keith, Gavin and Lucas.  Mel is survived by his 4 sisters-in-law and 3 brothers-in-law and his extended family.  A special thank you goes out to Brad Gunn, Jennifer and Stacey of ParaMed for their care of Mel.  Mr. Cole is resting at the Rushnell Funeral Home – Picton Chapel, 33 Main Street West, Picton (613-476-2450).  In keeping with Mel’s wishes, cremation has taken place and a Private Graveside Service will be held at Westlake Church of Christ Cemetery in the Spring.  If desired, donations to the Heart & Stroke Foundation or Parkinson Canada would be appreciated by the family.  Online condolences and to share memories of Mel, please visit: www.rushnellfamilyservices.com