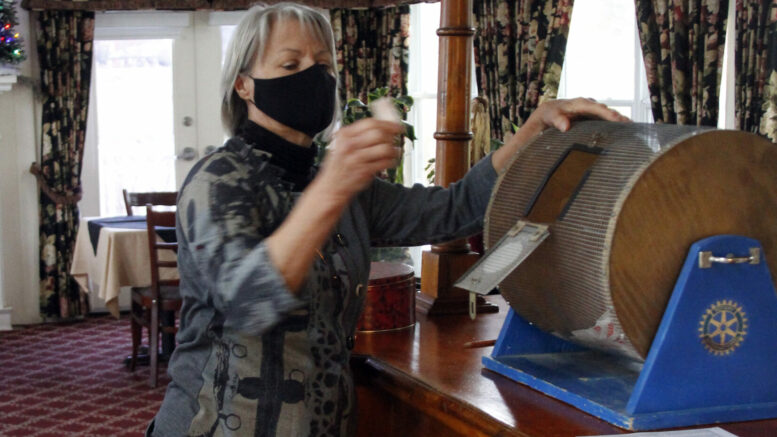 Bev Carnahan was named at a Paul Harris Fellow by the Rotary Club of Picton last week. (Desirée Decoste/Gazette staff)

The presentation recognizes a member of the community who has lived Rotary’s moto of “Service Above Self” in tangible ways. The Rotary Club of Picton honoured Bev Carnahan with the award.

“Bev Carnahan has demonstrated a remarkable capacity for partnering with our club and the Prince Edward County Memorial Hospital Foundation to provide funds for our hospital, and other local causes,” said past president Rob Leek.

From the Southwestern Ontario regions of London and Windsor, Carnahan cut her teeth into the hospitality industry.

“Carnahan’s initial love for the culinary arts gradually morphed into an even greater love for all things related to wine, so much so that she took some time off to successfully complete Niagara College’s Sommelier Program,” Past President Leek said to the group. “Equipped with her newly minted credentials, Bev was in a position to eventually accept the offer of ownership of the All Canadian Wine Championships, or ACWC, taking the reins from the founder of that organization.”

A few years after successes in managing this enterprise, Prince Edward County and it’s burgeoning wine industry beckoned as the ideal spot for Carnahan and husband John to continue their love of wine and begin a new chapter for the ACWC.

Leek said over the course of her tenure as Director of this organization, Carnahan has struck up partnerships with the intent of providing a new revenue stream for various charitable endeavours in her adopted community.

Specifically, Carnahan reached out to the hospital foundation, and then to the local Rotary club, to orchestrate a charitable event by donning the best wines submitted for judging from coast to coast at the wine championships for public tasting.

Thus, was born ‘Uncork Canada’, a celebration and competition of top wines produced across the country. In pre-COVID times, the event would draw wine lovers throughout the region to taste vintages not regularly available at local LCBO stores. Proceeds from the event as well as a raffle for the submitted examples have been donated to the PECMHF and other local worthwhile causes.

Despite the pandemic, Carnahan has managed to continue Uncorked virtually and still raised nearly $8,000 for Back the Build and other local initiatives.

The Paul Harris Fellow recognition acknowledges individuals who contribute, or who have contributions made in their name, of $1,000 to The Rotary Foundation.

Rotary established the recognition in 1957 to encourage and show appreciation for substantial contributions to what was then the Foundation’s only program, Rotary Foundation Fellowships for Advanced Study, the precursor to Ambassadorial Scholarships.

The number of Paul Harris Fellows reached the one million mark in 2006.

“I thank you very much for this thoughtful award, I am very humbled by it,” expressed Carnahan. “It means a lot to be recognized in that way and its a very warm feeling to have this award presented and i know that everyone is giving me their support and I put this event together and moving cases upon cases of wine to mention one thing, but again with the volunteers and the committee all pulling together to pull this off and its a fun event and we all have a good time and make some good cash at the same time for our interests.”