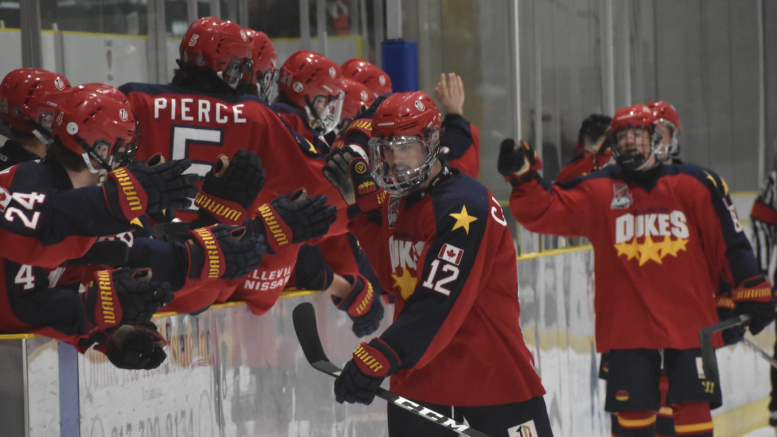 Wellington's David Campbell had two goals and assist for the Dukes this weekend. (Jason Parks/Gazette Staff)

While they might have preferred the full compliment of points available to them this weekend, the Wellington Dukes will take three of a possible four and move on to a testing road section of their 2021-22 Ontario Junior Hockey League regular season.

After Wellington hosts Haliburton County on  a rare Wednesday night at the Dukedome, the locals are in Caledon Thursday, Halliburton Saturday and Toronto to play the Patriots Sunday night.

Wellington were able to double up on the visiting North York Rangers on Friday and then forced overtime in Fenlon Falls where the Lindsay Muskies hosted Sunday afternoon’s affair.

The Dukes got off to a less than stellar start, giving up a pair of goals to the Blueshirts at the midway point of the first.

Nick Corderio and Max Donohoe beat Dukes starter Ethan Morrow once each in a span of 4:32 to stake the visitors to a 2-0 lead.

Wellington would carve into the margin at the 16:13 mark as David Campbell converted a Jacob Vreugdenhil feed for Wellington’s first tally. 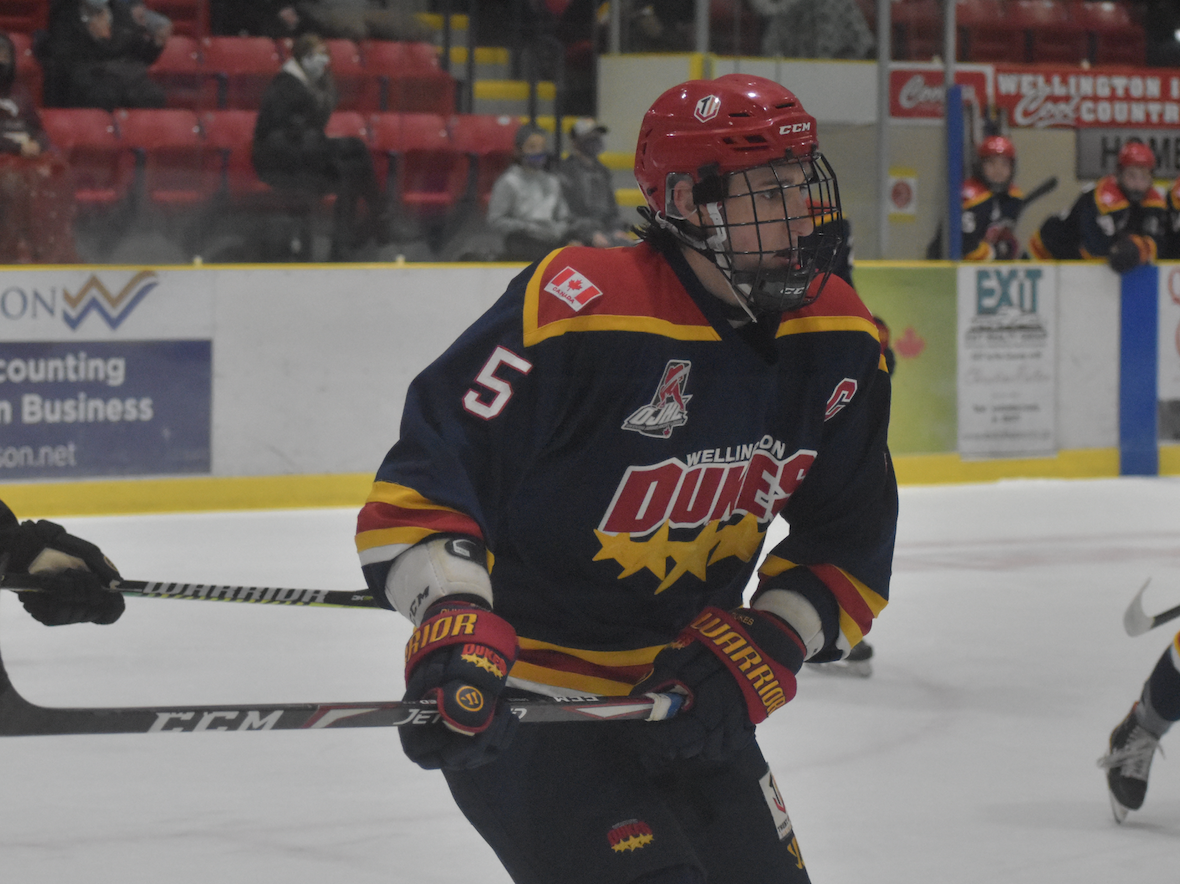 Dukes captain Emmet Pierce had a goal an assist in the club’s comeback effort against Lindsay Sunday. (Jason Parks/Gazette Staff)

Vreugdenhil would get his team back on even footing with the Rangers at 9:15 of the second with his 13th of the campaign.

Wellington began to impose their will on to North York through the last part of the second and midway through the third, the club managed its first lead of the contest when rookie Ethan Quick beat North York starter James Gray at 9:11.

Campbell would get his second of the game in the very late stages, sending a puck into the vacated Rangers cage with 12 seconds left in the game.

On Sunday, Wellington again found itself down a pair of goals only to fight back and event the terms against the host Muskies.

Lindsay’s Gunnar Van Damme and Jack Falkner each had tallies in the first and second period, respectively, and the Muskies, playing in the cozy confines of the  Fenlon Falls Community Centre.

The Dukes got to work in the third as captain Emmet Pierce scored just 15 seconds into the frame to get Wellington on the board.

Just under four minutes later, Pierce would set up Mason Reeves to to get the Dukes back to equal footing.

Unfortunately for the locals, an ill timed penalty allowed Boyd Stahlbaum time and space to beat Dukes starter Matt Dunsmoor at 6:04 to allow the home side to reclaim the lead at 3-2.

That one goal margin lasted exactly 35 seconds as Ethan Esposito bagged his first as a Duke at 6:39 to square the affair at 3-3.

Wellington would outshoot the hosts 41-32 but the goaltending of Yacine Chemrouk was a highlight for the home side.

The Muskies would come through and bite the Dukes at the end of the first extra session as William Jones solved Dunsmoor with 45 seconds left in Period Four.

Wellington’s lengthy road trip continues next Wednesday as they play a return date with the Rangers. The Dukes are at home next when they host Division leading Trenton Fri. Feb. 25.